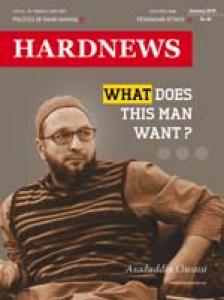 Owaisi: WHAT DOES THIS MAN WANT?

‘Muslims are secular; they want development with dignity’

Ghar wapasi: It’s not faith, but the politics of conversion that hurts

Assam:Time to end 'THE CRUEL RHETORIC'

Pakistan: Lessons from a tragedy

UPA: "The Congress Party has enough time to get its act together"

Bihar’s thwack in the face of the BJP

The extreme cold this winter took me back to Ali Sardar Jafri’s Five Nights of Lucknow, first published in 1998 as a collection of 11 terrific essays.

In the chapter titled Fourth Night, it is written how stormy the weather was in December 1941. This was on the eve of the civil disobedience call against the British by Mohandas Karamchand Gandhi in August 1942, to quit India. Politics around the world was hot and Indian hearts and minds were filled with hope of a better life after the retreat of the colonialists from South Asia.

During the campaign for the 2014 parliamentary elections, besides the Congress and the Gandhi family, the target of a section of the BJP leadership and its front organisations was the media—both in terms of controlling it as well as viciously rubbishing it. This two-tack approach revealed itself, first, in manipulating the visual news media, which manifested itself in extensive coverage of BJP political rallies—creating an impression in the mind of the public about the inevitability of the imminent change. Social media multiplied its impact.