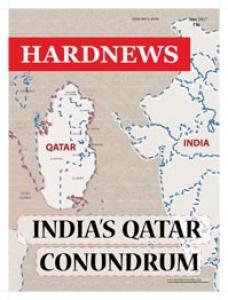 Paytm may soon have a monopoly in the booming digital wallet space. The impending sale of FreeCharge at the behest of SoftBank has something to do with it
Nikhil Thiyyar Delhi

A month after violence erupted between Dalits and Thakurs in Shabbirpur village, tension still simmers below the surface. As the government transfers senior police officers and moves to contain the damage, will the Dalits be appeased ahead of the crucial municipal elections?
Shalini Sharma Saharanpur

NDTV’s promoter, Prannoy Roy, did not conceal his gratification at the solidarity expressed by media persons and several superannuated editors at the Press Club in New Delhi after his premises were raided. Most of the speakers reminisced about the dark days when Indira Gandhi declared an internal emergency and smothered the press. In the reckoning of these worthies, the country was sliding inexorably towards similar media darkness and it was a matter of time before some kind of emergency – in the name of terrorism – is imposed once again.

America is great again, despite Donald Trump. Media resistance in the face of an authoritarian regime is a heartening thing to see. It has inspired some of India’s mainstream journalists to tweet about it in awestruck tones. Yes, the very same people who bow and scrape so low before the establishment that even footstools are taller than them. The tragedy is that a few of that lot were former liberals who, after they figured out which way the wind was blowing in 2014, caved in as depressingly as cakes do when eager beavers open oven doors too soon.

How do we fix India’s ‘stunted’ growth?

Despite having a food safety solution since 1975, our progress has been slower than some of the poorest countries in sub-Saharan Africa. How do we fix it?
Hardnews Bureau Delhi

The world watched with disbelief when Saudi Arabia and its allies decided to punish Qatar for supporting terrorism in the region. These allegations against Qatar had been the sole preserve of Syria and other countries who suffered the after-effects of the Arab Spring in 2010.