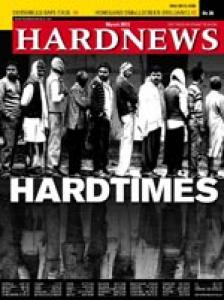 If the government does not do something quickly enough, the slowdown evident through the falling growth rate will become so severe that it might trigger a cycle of social pain and mass unrest
Sanjay Kapoor Delhi

One Year To Go

And Justice for the ‘Suryanelli Girl’

Sexually assaulted for 40 days continuously, by 42 men: After 17 long years, will this epic tale of injustice ever end?
Arathi PM Delhi/Kasaragod (Kerala)

Vishwaroopam: ‘This is the first Muslim hero in Tamil cinema’

The slick thriller tries to look at terrorism from both viewpoints — that of the patriot-fighter and patriot-terrorist. In every episode, your notions of the myth of heroism keep taking a 360 degree turn
Sonali Ghosh Sen Kolkata

'What we are seeing is the Modi-isation of Congress’

We are not excited about going to war: Salman Khurshid

The Bangladesh upsurge is a watershed moment in the life of South Asian Islam which is accommodating, deeply secular and has enriched the culture of this region. Can Pakistan see a Shahbag?
Sanjay Kapoor Delhi

When I first arrived in Vienna, way back in 1982, I made a beeline for the city office of Solidarity. At that time the popularity of Lech Walesa, founder of Solidarity two years earlier in Poland, was at its peak. Not much was known about eastern European countries in those days. It was extremely difficult for people of those countries to travel abroad and foreigners found it almost impossible to visit. But there was so much to know about what was going on in that closed country. The question was how?

A day in the life of Narendra Modi

7 am: Wrote a spot of poetry. It’s absolute rubbish, as always, but people will buy anything written by me. They adore me. Poetry apart, if I could publish all the fiction I order my state officials to write as statistics, I would instantly knock ChetanBhagat off the bestseller lists. Sweet boy, though. I love people who adore me.