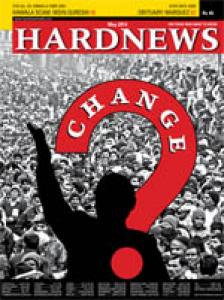 The Meaning of Change

A wave rides on bumpy roads

HAWALA: THE MEAT OF THE MATTER

Moin Qureshi, the meat exporter raided by the IT department, appears to be a hawala operator linked to top politicians and bureaucrats
Sadiq Naqvi Delhi

The South could spring a surprise

Will the Ganga flow quietly?

IN THIS FILM, OUR LENS IS ALMOST ANTHROPOLOGICAL’

RIOTS WERE NOT ACCIDENTAL

SECULARISM OF THE INDIAN STATE

Images of the Bharatiya Janata Party leader Rajnath Singh wearing a skull cap and Narendra Modi rejecting it inspired many a heated debate on secularism at a time when Hinduism is used for political gain and its plural and tolerant nature is threatened by fanatics in ironic imitation of monotheistic religions.

Some describe secularism as a critique of religion, others imagine it as a strict separation of politics from religion. The modern believe that politics is public while religion is private.

Taking a tip from some very, very senior and highly respected journalists and some very, very senior but not as highly respected news anchors, I have decided to write nice things about NarendraModi from now onwards — just in case he does become Prime Minister of India (gulp). I still have Amitbhai Shah’s Muzaffarnagar speech about revenge being the only answer ringing in my ears — I can’t ever forget that Amitbhai is Modi’s hatchet-wielding right-hand man.

The Pakistani media has seen bad times in the past, and been punished heavily for its stand for democracy. Military dictator  Zia-ul-Haq censored newspapers and had journalists imprisoned and flogged. The next military dictator, Pervez Musharraf, took all the private television channels off air for weeks, causing losses of millions of rupees. The largest and most influential, Geo TV, was kept off-air for months after the others were restored.

ODE TO THE AGE OF AQUARIUS

A definitive guide to the rock musicscape of India in the 1960s and ’70s, Sidharth Bhatia’s India Psychedelic is an essential read for any music junkie
Shone Satheesh Babu Delhi