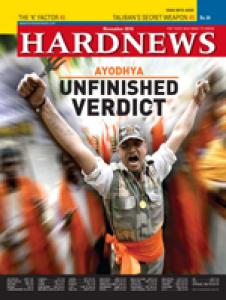 So where was Ram Lalla born?
Amit Sengupta Delhi

'They have a list of 3,000 mosques which they claim were temples'

How can two deities occupy one place? The court says the place under the central dome is the birthplace of Lord Ram (swayambhoo deity) — as many have believed since the last few centuries — and, it also gives the benefit of limitation to the other deity as well
Sadiq Naqvi Delhi

By not letting Narendra Modi and Varun Gandhi campaign in Bihar, Nitish has managed to make inroads into the Muslim community
Akash Bisht Delhi

Has India moved on? “No,” said Farah Naqvi, member, National Advisory Council. “I thought the entire Indian society has chosen to accept this judgement. I refused to believe that it was true. Will there never be justice, especially for the Muslims of India?”
Amit Sengupta Delhi

While China and India slug it out for oil in Africa, with China running far ahead, multinational ethics seems to have taken a long dirty dip
Meha Dixit Delhi

No one wants hysteria or violence in Ayodhya. The Hindutva game is up. But the uncanny unease is deceptive
Pradeep Kapoor Lucknow

NO ONE BUT RAM LALLA

Faith as basis of the Ayodhya judgement is perfectly justified. The government should be forced to bring an amendment to bar the construction of any structure other than those connected with the Ram temple at Ayodhya
Subramanian Swamy Chennai

‘Ram Lalla’, a Hindu deity, was party to a legal battle over a property dispute. Can this phenomenon stand the rigours of rationality, logic and justice?
Neha Rathi Delhi

SUCH A BANNED JOURNEY

An umbrella coalition of farmers and friends are marching through the vast Indian landscape to resist the neo-liberal policies of the current regime. It’s a journey where every beginning is a revelation
Aritra Bhattacharya Ahmedabad/ Jabalpur/ Wardha

This is the time for Azadi.

"There is nothing in Pakistan," said the Indian playback singer with finality. "They have no auditoriums, no facilities, there is nothing there. Everything is here (in India)."

Open society and its seasons

It is cinema season in Vienna. Of course, there is cinema throughout the year here, including the open air screenings under the summer skies when each star seems as big as the moon.

But the Viennale is different. The grand festival of international films forces the city to open its doors every autumn to the whole world, at least on screen.

Perhaps Vienna is different too. No wonder it has been voted second year in a row as the city with the best quality of life in the world.

And so we've moved from the embarrassment of filthy toilets and friendly mongrels with muddy paws in the Commonwealth Games (CWG) village to better, more inspiring things, whew. This is one long saga that fortunately had a happily-ever-after ending. Even so, if anyone dares to cheerfully suggest that we must make a bid to host the Olympics in India in the near future, I will promptly gag that person and ruthlessly squash him like a cockroach.

As darkness settled on an October sky illuminated by laser beams and fire crackers bringing about a colorful and noisy end to a controversial Commonwealth Games (CWG), it became apparent that the festivity and levity of the 12-day sporting event would be quickly forgotten.

Expectedly, next morning Prime Minister Manmohan Singh announced his resolve to find out why the CWG came close to be scuppered. He also promised to find out those who bilked the system to make big profits in these games.