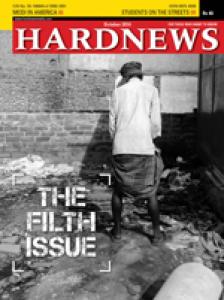 Clean up with a conscience

The Prime Minister envisions a ‘Clean India’. Will it just remain an ambitious dream or can Modi deliver?
Sanjay Kapoor Delhi

The Perils of Breathing

In spite of its supposedly excellent green cover, the air in Delhi has become the dirtiest in the world
Hardnews Bureau Delhi

The ill effects of the almost institutional practice of open-air defecation can no longer be ignored, and to clean up the government might have to dirty its hands
Lily Tekseng Delhi

The conversation about the relationship between caste and sanitation, therefore, must also encompass new ways of segregation and exploitation that is made possible by the primarily upper caste/middle class-driven notions of development
Lily Tekseng Delhi

With the e-waste burden mounting, India still has no clue as to how to deal with this toxic dump
Hardnews Bureau Delhi

Why do waste-pickers continue to be a neglected lot, in spite of their vital contribution to keeping a city clean?
PinkyChandran, KabirArora and Nalini Shekhar Bengaluru

The truth is in the tea

When all the boards did shrink

In his first trip to the United States as Prime Minister, Narendra Modi gives little away
Sanjay Kapoor Delhi

F or several weeks now demonstrators in Hong Kong have been occupying one of the few open spaces — Central — in densely built Hong Kong. Their demand is for genuine democracy, as promised by the government of China at the time of the takeover in 1997. Hundreds of thousands of young people are squatting on streets, wielding umbrellas as shields against tear gas or other strong-arm tactics of the police and pro-Beijing thugs.

Exclusive excerpts from the book, Kafkaland: Prejudice, Law and Counterterrorism in India by Manisha Sethi

Once you go black, you never go back. But, jokes aside, where is India’s black money? It’s in Switzerland and other tax havens — we were informed by those agitating against the United Progressive Alliance (UPA) government’s criminal lethargy in bringing the moolah back from abroad. It was claimed that the amount stashed away was so colossal that it could literally rid India of its poverty, and also transform all of it into a bustling Shanghai. Some conservative figures put it at about $1 trillion, while the liberal estimate hovered at just over $16 trillion.

I ’m happy to see the garbage outside my doorstep swept away in recent days. The only worry is that the filth may have been removed from this doorstep only to be deposited at another. This out of sight, out of mind policy is no long-term solution to a clean country.