In India, citizens do not have the liberty of being protected if their area gets caught in a conflict. Reason: Though India is a signatory of the Geneva conventions but as India does not declare zones of violence as conflict zones, it is difficult for the Geneva conventions to be triggered off .
Sumiran Preet Kaur Delhi

Various corners of India are caught up in conflict of different kinds. Wars and violence across the world have changed in nature - from inter-State to internecine. They are now fought between rival ethnic, religious or political groups within a State. In many cases, there are conflicts between the State and its citizens. There are instances where the State is the perpetrator of crimes.

India has its own array of problems - riots, Maoist problems, violent activities of extremist outfits, insurgency and terrorist attacks. These make citizens vulnerable as they get drawn into conflicts, either directly or indirectly. One of the conflicts in which civilians across many states of India have got embroiled is the terror unleashed by the Maoists.

At a recent conference organised by the International Committee of Red Cross (ICRC) and Women's Feature Service, startling facts emerged about how the conflict between the State and the Maoists is adversely impacting citizens in areas where the problem exists.

Speaking about the situation in Chhattisgarh, Manipadma Jena, a senior journalist, described the plight of those displaced from their homes in Dantewada due to the Maoist problem. They have been rehabilitated in Salwa Judum camps in Raipur, she said. The Salwa Judum movement, which began as a peaceful movement against the Maoists, has now turned violent and enjoys State support. The condition in these camps is bad. They usually get to live in compartmentalised single-room sheds with no facilities for sanitation or toilets. Healthcare is non-existent and schools have been relocated. The National Human Rights Commission (NHRC) found that there was only one qualified doctor in Dantewada district.

What's worse, Maoists have begun recruiting young boys and girls. The women's wing is called Krantikari Mahila Sangh while the children's wing is the Krantikari Adivasi Balak Sangh. Many a time, Jena said, Maoists used children as human shields by strapping bomb or weapons around them. She cited the instance of Sarita Netam, whose father, Ganpat Netam, was the panchayat head in Bijapur block of Dantewada district. He was killed when he could no more provide children to the Maoists to join their cadre to fight the so-called "people's war".

The Maoist problem has devastated education, health and law and order in affected districts like Raipur and Dantewada. Almost 40 per cent of the children in the age group of 6-16 years could not get education as they have either joined Salwa Judum camps or the Maoists. School buildings have been destroyed to make police camps.

Lalgarh in West Bengal saw the Maoists feed on grievances of the people, who didn't have the basic amenities. Maoists took advantage of the situation to build up their base and carry out conflict against the State. They killed policemen, and the only MBBS doctor in the area, besides many innocent people. The common man is the worst affected.

Conflicts also uproot people from their homes. Nirupama Dutt, a Punjabi writer who has written extensively on the anti-Sikh riots, narrated stories she heard in Mohali. Many people during the 1984 riots had fled from Delhi to start life anew in Mohali. She spoke of Kashmir Kaur.

When the mobs came to attack, she made her son wear a girl's frock and locked her husband in a room. Her Hindu neighbours helped her. Soon, there were threats that the house would be burnt and the Hindus protecting them would also be attacked. So, they fled in their truck to a local gurudwara. The truck was attacked thrice, but they managed to reach the camp.

A few days later, her husband returned to fetch the orphans of the neighbourhood. He had to step over charred bodies strewn all round. It was then he got his first cardiac attack and he never fully recovered after that, said Dutt. After this, Kashmir Kaur went to Chandigarh with her husband and son. They had one truck and one bed. She sold the bed for Rs 150, bought a stove, some food and started living there. There were other women like her ravaged by the riots. "Gradually, they set up small tailoring units, prepared pickles and papads for sale. Some helped out at the gurudwara and got a free meal there," said Dutt.

Conflicts also cause forced disappearances. For relatives of those who go missing, it is a long and agonising wait for their loved ones. In Kashmir, the Association of Parents of Displaced Persons (ADPD) was founded by Parveena Ahangar. It has around 3,000 members. Ahangar is a Kashmiri mother who lost her son when he was taken away by the security forces. The army had mistaken the teenager for a militant. Since then, she has been assisting those suffering like her. She mobilises families of the disappeared in Kashmir and is working against impunity enjoyed by security forces against human rights abuses.

According to Mir Hafizullah, legal advisor of ADPD, "Around 10,000 people are missing from J&K alone. There are people who have gone missing from police custody, too."

Referring to the Shopian case of alleged abduction, gang rape and murder of Asiya Jan and Neelofar Jan, Vrinda Grover, a lawyer, said, "You cannot hand over everything to the CBI. What you need is an independent prosecution agency which has functional autonomy and discretion. In India, the Geneva Conventions cannot be applied everywhere, but at least somewhere they can be applied. But that is also not happening."

Not just in Kashmir, scores of people went missing during Gujarat riots. People even go missing from police custody in J&K. But "enforced disappearances" are not taken into account by the Indian legal system. India has signed the Convention on Enforced Disappearance but has not ratified it. The word disappeared occurred in the Constitution for the first time in 2006. For relatives of those who go missing, it's a long-drawn and lonely court battle, especially when it is against the State.

During conflicts, women and children are worst sufferers. Besides other traumatic experiences, women are vulnerable to sexual violence. Pratima Enghipee, an author from Assam, narrated the case of a 12-year-old girl who was raped by 12 policemen. Not just security forces, members of militant outfits like the ULFA (United Liberation Front of Asom) also rape and kill women. The alleged rape and murder of Manorama Devi in Manipur is another glaring instance of atrocities against women.

According to International Committee of Red Cross (ICRC), rape is used to spread terror and bring dishonour to the rival group. Rape is also used as a means to settle scores between rival groups.

According to Grover, "The Constitution of India has a colonial origin and has still not adapted to the needs of an independent country. It does not label the State as an "offencer" or "perpetrator". It only gives the State role of a "protector". But in many cases the State is the perpetrator."

To file a case against a government employee, sanction is a must. And, that is an arduous task. Moreover, the legal system is not prepared to deliver justice to women who have been in situations of conflict, said Grover.

For Kavita Karkare, wife of ATS chief Hemant Karkare who was killed during Mumbai terror attacks, it has been a lone battle. "After few minutes of my husband's death, I was alone at the hospital with his dead body. None of the senior police officials had come to console us. We kept asking why his bullet-proof jacket was missing after the incident but we got no answer. It implies something is wrong. And, as a woman the battle becomes even more challenging."

Human rights organisations, NGOs and international organisations are working to prevent or at least mitigate the effects of armed conflicts on civilians. One such move has been taken by the ICRC. Through international humanitarian law, it aims to protect the rights of those who are not involved in the war.

Francois Stamm, regional delegation head in South Asia, said that ICRC is playing an active role in India. Since 1995, the ICRC is visiting detainees in Jammu and Kashmir. The ICRC is also supporting the local branches of the Indian Red Cross Society in Assam, Chhattisgarh and Gadchiroli in Maharashtra, he said.

"But there are limitations. Since India does not declare them as conflict zones, we cannot perform our role beyond a point. ICRC has always been a sponsor of Geneva Conventions for the protection of the wounded and also respect for humans and dignity of civilians. In these conventions, we request the parties in conflict not to hurt those who are not involved in the conflict, especially, women and children," said Stamm. But as of now, it is not happening in India.

The Article 3 of Geneva Conventions deals with violence that is not of an international nature. It requests parties involved in a conflict not to hurt those not involved. This article, if applied, can be a shield to citizens who have no link with the conflict, for instance, in areas wracked by Maoist violence.

With every passing day, more and more civilians are getting caught in the conflict between the State and its people. "If this is happening in an 'undeclared' war, what will happen if the government actually declares it a 'conflict'?" asked Kavita Krishnan, member of All India Progressive Women's Association.

In India, citizens do not have the liberty of being protected if their area gets caught in a conflict. Reason: Though India is a signatory of the Geneva conventions but as India does not declare zones of violence as conflict zones, it is difficult for Geneva conventions to be triggered off. Sumiran Preet Kaur Delhi 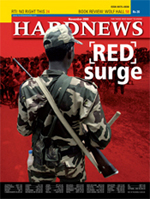