Three tigers sighted in one day! A journey through the heart of the forest: Panna Tiger Reserve

The pure blue green, shimmering. Flowing pristine river. Ken, meanders through the mountainous heart of the Panna Tiger Reserve for 55 kms. It takes a long time for the evening to set on the waters of this ancient river. The flow becomes even, the forest reflected in green spreads its wings on the waters, a soft wind blows from the north, and the flying fishes make rippling perpendicular patterns on the surface. The current moves deep. The animals are still sipping  the drink. A magnificent Mahua tree  has suddenly disappeared from the left bank-washed away by the floods. The river swells during the rains. In spring, quiet flows the river, quenching the thirst of Panna.

Post-spring sunshine. The first magical dawn at Panna Tiger Reserve. Thick, dense forests. We are deep inside tiger territory. First on a Gypsy. Then, on foot. In this stunning silence, every step on crushed, yellow Saal and Mahua leaves becomes high decibel orchestra in stunning symphony. Tribal rock paintings, 2,000 years old, next to a sheltered rocky ledge. Tribals would relax here once upon a time. Gondwana tribal relics scattered all over. A huge, rectangular rock hides a cave – this too can be a tiger’s den. She, T1, the restless tigress, is somewhere around. Very, very close. She is just behind the rock painting. Behind us. Yes, she is there. Confirmed. A langur alarm call. She is shy. She crossed our path, but we missed her. She is gone. 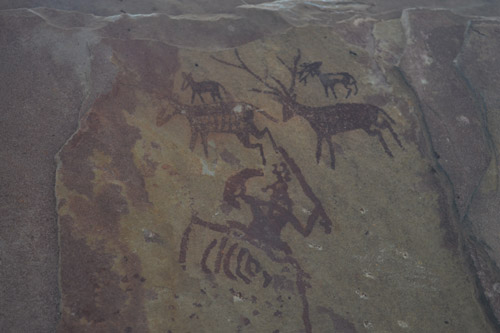 Long ride. We enter a dense thicket, on an elephant, an axe to make way. Deep is the forest. And then we see him. P1. Son of T1 and T3. Male, 23 months old. Majestic. Standing in a little opening, almost hidden, 8ft plus, huge. Raw aura of absolute power. Yellow, black, shining stripes. Beautiful. Detached. Crouching. Relaxed, but in an alert, jump position, eyeing one-year-old Ananti at 5ft distance, protected by mother elephant Roopkali. P1’s stomach is full, but he is young and greedy. Planning a future meal. Ananti’s brother, Vindhya, our male tusker, moves behind the tiger. Too close. Intense silence. No one moves. P1 turns and looks us in the eye. Bored, lazy, I care a damn look. Tigers have no threat perception. Time stands still. His gaze is centred on Ananti. But two elephants, can he take them on? We move on. It stands up. Shakes his head. And follows us. “In half-a-sec he can reach us. One jump,” says Mahout Manu. We hit the road. Surely, P1 is observing us from the thicket. He is waiting. We move on. 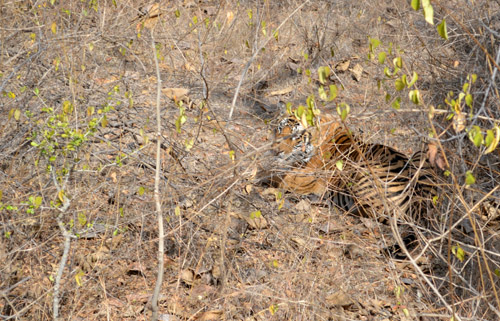 Two hours later. We hit another forest end. Near a check dam. Four cubs of tigress T2, one year old, are around. We walk through their invisible presence, looking for pugmarks, with one forest guard with a lathi. The sun is at its peak. Manu arrives with Vindhya; short cut. Endless 5km elephant ride through thorny bushes, rocky terrain, dense trees. No path. Manu has been in the forest since he was 15. He lives in Hinauta village just outside the reserve. He loves the forest. He has been up since 3am tracking the tigers, on patrol duty. We go down into a tunnel. Surrounded by tall bushy rocks above us. A dry nullah with water holes.

There she is. Relaxing in the cool. Unruffled. Slightly irritated. Moves an inch into the shadow, 6ft distant. Don’t disturb my siesta! Yawns. We can see her tongue, teeth, whiskers. Little, playful Ananti suddenly moves towards the tigress. Both, one year old. Animal instinct. Roopkali growls. Moves. Pushes her under her gigantic legs. Tigress, disturbed, jumps to a rocky bush. Alert, gazing at us. We move deeper into the nullah. Her brother must be at arm’s length in the rocks, close to our necks. Silence. Forebodings. I feel fear. We are in the midst of two young tigers, in a 10ft range, inside a tunnel-like nullah. 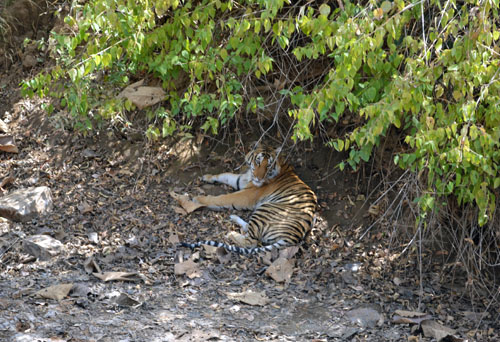 She jumps down. Turns her back on us and walks. Come see my backside, she cares a damn. Oh! Slow, majestic walk. She finds a cool corner. Ignores us completely – go to hell. Not an iota of fear, anxiety or restlessness. Last look. She watches till the end, till we disappear climbing on the high rocks looking for her brother. 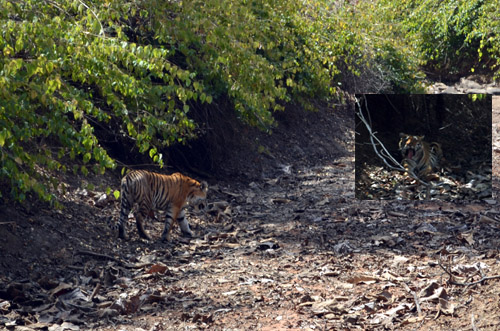 Camouflaged in the yellow-fading green thicket, the yellow male stripes are distinct. Half asleep. Closer, more closer. He does not move an inch. Just 2ft away. He cares two hoots. No movement. Hush of the leaves falling. Then he lifts his face, stares point blank at me, radiating absolute power. Static time. It’s been a melodramatic 15 minutes we have been with the cubs. So close that we could feel their breath. Their siblings, another male and female, are nearby. Only yesterday, two of them killed a buffalo, called their brother and sister, and the four of them had a hearty meal. 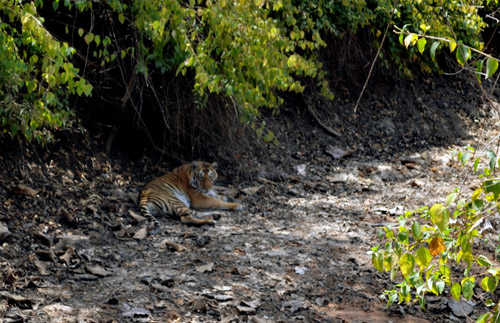 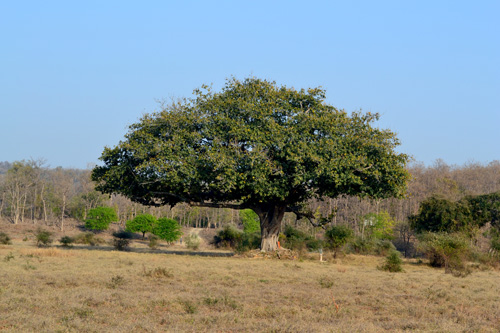 From a distance, it looks like a gigantic mirage. Brown rocks with white vulture shit, like a tangential art installation. Imagine it full of flashing, roaring, fierce waters falling at such a great distance. Now dry, during rains it becomes a magnificent, melodious, magical water fall. Surrounded by a thick canopy of forests in the depths of this huge, natural rocky hole, the vultures fly in a loop, their little kids hanging on the cliffs. From the top, the gorge becomes infinite. There are four stone benches, in a circle, in silent conversation. There are 300 gorges around this undulating Vindhya forests. Awesome.

The tigress, T1, would trek through these huge heights into the depths of the gorge. No one could detect its presence here. This is where the first fabulous birth of four tiger kids happened, fathered by T3 (see picture, page). Near a deep water hole, covered by high rocks and dense forests on all sides, she doggedly reared her kids, even as they did not open their eyes for 15 days. A leopard and bear too lived here in the rocky caves. They were chased away; the forest officials actually saw the tigress giving the bear a good, long chase. At the time of writing, T1 has again given birth to four kids, T2 is pregnant, T4 is rearing her kids in an unknown location, and T5 is mating. And the only male having a gala time with all of them is T3, the great yellow striped beast, the king of the jungle. 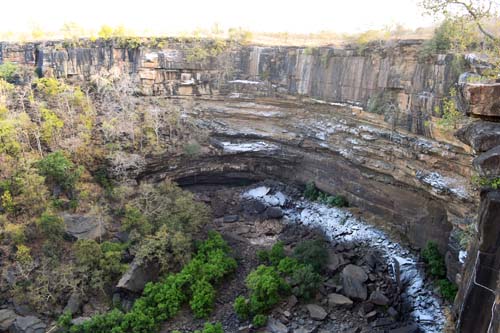 This was truly a Parliament/Panchayat of Langurs – no offence meant to anyone. A big, circular water hole, surrounded by a big collective of langurs, in circular formation, all speaking, screaming, debating, hooting together at the same time, in stunning symphony. If they had a ‘Speaker’ to preside and moderate proceedings, we failed to locate him/her. But they were surely animated and serious, and they all knew their constituencies. No one disrupted the proceedings. And thank god – no one cared a damn for the Lokpal Bill. 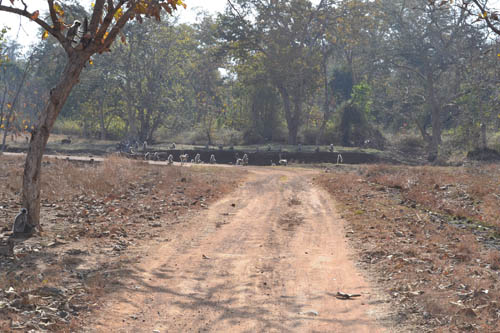 Ghadiyals were introduced from their original habitat: Chambal River near the ravines. Crocodiles have lived in Ken River since years. They bathe on the rocks and sandy beach. One did not even open his eyes as we crossed it on a motor boat (see picture). The other slithered away into the blue waters. Eight days ago, on the left shore near the jungle road, a cheetal was dragged inside the water by a croc. Weeks ago, a big sambhar was captured by four crocs. Hundreds of deer still drink the water near the shore. Shhhh! Leopard! The forest guard becomes tense. We hear a leopard on the right shore.Forest guards Shankar and Mohan tell us, they are sleeping on the open-to-sky terrace of their room near the river because it is hot in the night. They know a bear and leopard cross close by every night to drink water in the river. The night is full of animal sounds. They have no fear. 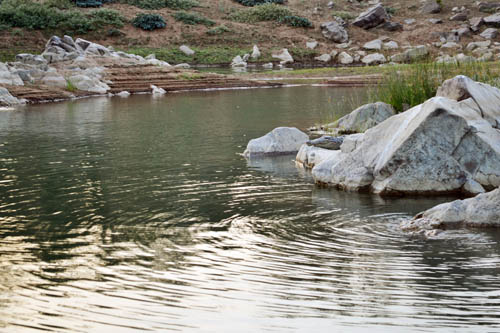 Don’t you feel fear? He says no. What if you meet a tiger? We just move away and let them pass, he says. No forest guard, mostly on foot, unarmed, has been attacked by the predator. Mahouts Asharam and Manu (hidden behind the trunk), with Roopkali, lovely, obedient Ananti (who would constantly lose her way) and her brother Vindhya, know the forest like the veins of their rugged hands. They live and breathe the forest. They speak of tigers, as if they are friends. I jump from the elephant and embrace Manu. Thank you, I say. “Three tigers in a day,” he says, shaking my hand. “You are lucky.” 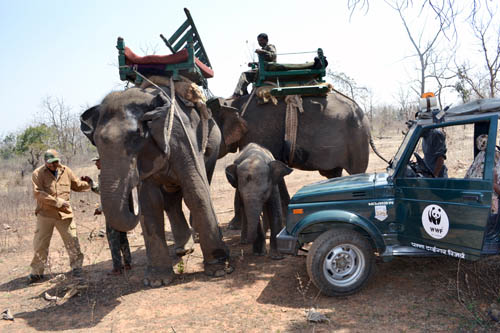 Three tigers sighted in one day! A journey through the heart of the forest: Panna Tiger Reserve
Amit Sengupta and Akash Bisht