A Death in the time of Fascism

Death is an unceasing narrative. Death in our everyday life of rambling ritualism arrives and disappears like uncanny crossroads in a journey where the end is inevitable. Distant deaths perhaps do not even touch us, they don’t trigger turbulence or abject absences or lament and loss, perhaps not even outrage; thousands dying and dead in former Yugoslavia, Syria, Iraq, even in Pakistan. Even in our own ‘patriotic’ landscapes, people dying in stampedes, bomb blasts, organized communal carnages, farmer suicides, fake encounters, or slowly, invisibly, due to poverty, malnutrition and hunger, they seem to float in an etherized twilight zone, passing by like ephemeral images of scattered cinema, the tragedy stagnating in flux.

Perhaps we are choosing to shut our eyes and thereby eliminating the world; in some senses it is like annihilation of the self, not exactly like suicide, but almost like the self-denial of the bitter realism of abject pain.

I presume those who don’t live in solitary confinement, waiting for inevitable death, almost always presume that they will never die. Jorge Luis Borges said, “Immortality is Commonplace.”  For those who live on the addictions of the insatiable greed of infinite fame, wealth, property, power, luxury, perhaps they have imagined that they will be eternally immortal, that they will buy off death, or old age, or the failure of body organs and soul-fire.

For a lot of others, inside prison or outside, life is a continuous narrative of solitary confinement, where the window opens only to remind that it can never again be re-opened. Franz Kafka, for instance, solitary and exiled in his own life, moved from one airless corridor with shut windows, to yet another. And yet, surprisingly, he wrote about love; passionate love letters of love, often not expecting an iota of love.

In contrast, Albert Camus would say that sitting outside a sunshine school with a flock of children running, or the fleeting smile of a stranger woman, or even the intangible fire of desire, however faint, would be enough to make a day. This is perhaps as ordinary and magnificent as escaping from a firing squad. Between life and death the line is so blurred, that the moment the body goes lifeless, it is all over.

Tears become salt perhaps, and an infinite journey of saline waters becomes text, silences, sensitivities, struggles, sacrifices, geographies, touch, sound, sensuality, dreams, dialectics, fragrances, angst and anger, bad faith, betrayals, back-stabbing, bad-mouthing, hair, skin, eyes, intoxication, winter sunshine, resistance. You touch one, the other seeks belonging,  while others move by, like Tarkovsky’s cinema or Van Gogh’s landscapes in exile, always engaged, neither looking for morality or immorality, mortality or immortality, turning everything simultaneously into sublime genius, great rebellion, authentic originality, eternal defiance, and at once commonplace, like the window which suddenly opens in a dark room with a view.

The fight against the fascists will be as relentless as he would want, in enlightenment, theory and praxis, and the spoof and the caricature, and the anarchism of desire and street language will be as sharp as ever, like the first and last word written by him, still incomplete. Men like Rajendra Yadav can never come back

Amidst death and dying, hence, when a great, radical, brilliant, non-sectarian, non-conformist writer, novelist, editor, rebel, dissenter and ‘lover’ suddenly becomes lifeless, it is as if the window has been shut on us yet again. If he is gone, and he will never come back, we have already been condemned and fated to live. His death suddenly shuts all options. And yet, opens old and new windows – of politics, aesthetics, resilience and hope.

It tells us that his body has gone cold but the fire is still burning, and the flowers are blooming, and the sound of his voice still booms, and the barricades are still there where he once stood, across many barricades, and the light inside the homes of Dalits is rising like a flame, and he loved this flame so much, and that women are fighting on the streets, across the corridors of unfreedom, unmaking new paradigms of liberation, and this too he would love, and that the underdog is refusing to remain an underdog anymore, the colour inside his eyes is red.

And that the fight against the fascists will be as relentless as he would want, in enlightenment, theory and praxis, and that the spoof and the caricature, and the anarchism of desire and street language will be as sharp as ever, like the first and last word written by him, still incomplete.

Men like Rajendra Yadav can never come back. Their absence will always be a presence. Like every word he wrote on his desk, early in the night’s morning, when the dawn was still far away. 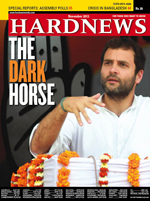