Language alone cannot be the basis of statehood. The story of Telangana is of a deep cultural divide between two peoples united by language but divided by habits, values, history and culture

On November 1, 1956, my father, who was the District Magistrate of Hyderabad District, and his SP Abdus Salam Khan, were tasked with the job of ensuring security and order at the ceremony of the formation of the new linguistic state of Andhra Pradesh, being held at the historic Fateh Maidan grounds. The maidan was given its name by Emperor Aurangzeb, whose army camped there while the siege of Golconda was underway. Golconda’s reputation of having never been reduced by assault stood firm and the emperor finally took it down by bribing the commander of the main gate of the fort. Aurangzeb nevertheless considered it a great victory and renamed the campground, Fateh Maidan, for a victory that never was.

Thus, it was not without much irony that a new dispensation was celebrating the assumption of power at the Fateh Maidan, next to the Nizam College campus and the Madras-e-Aliya School. As the procession of Andhra leaders approached the Fateh Maidan grounds, the students began jeering them and soon bedlam followed as students surged forward to stop this ridiculous victory parade. My oldest sister, who had just joined college, was among the protesters. My father and Salam Khan, who were both former students of Nizam College, watched aghast as their children and their friends’ children, and an entire young generation of Hyderabadi elite, revolted in front of their eyes. Quite early that day, it was decided that come what may, the ceremony would take place, but the police would show maximum restraint. Salam Khan’s force held firm and Neelam Sanjiva Reddy was sworn in as CM amidst boisterous jeers, catcalls and hoots. My father later told me that it was the saddest day of his life.

Quite ironical considering that Sanjiva Reddy was a bit of a family friend, having shared a cell at the Vellore Jail with my maternal grandfather for their part in the 1942 Quit India agitation. Since my grandfather had a large and palatial home in Vellore, the families of the political prisoners often used to stay at the bungalow at Officers’ Line. The families of two later Presidents of India were frequent guests in that house, and it was also the venue of one Congress Working Committee meeting in which MK Gandhi took part. The Mahatma also had stayed in that house at various times.

When the re-organization of states was undertaken in 1956, the people of Telangana expressed apprehensions about being forced into a shotgun marriage with Andhra, then a three-year old state with its capital in Kurnool. The people of Telangana also spoke Telugu but it was quite different from the Telugu of the coastal people. Telangana boasted of a heritage quite different from Andhra’s. The Kakatiya kings of Warangal and the Vijayanagar kings were Telangana dynasties. The Muslim rulers of Golconda and later of Hyderabad only came to the fore when the Muslim kingdoms of the Deccan, along with some Hindu rulers of coastal Andhra kingdoms, ganged up on Vijayanagar and defeated it in the decisive battle of Talikota.

The Andhra region was also much more developed and wealthier than Telangana, with the British having invested a good deal in education and infrastructure, while the Nizam of Hyderabad seemed more preoccupied with collecting baubles like the Jacobs’ diamond, and accumulating a huge personal fortune. He was reckoned to be the richest man in the world. In fact, this took him to the cover of Time magazine well before Mahatma Gandhi! So wealthy was the Nizam that he gifted an entire Spitfire squadron to Britain when the German Luftwaffe was pushing it to the wall.

As the Nizam thrived, so did his court and the feudal bureaucratic elite. Hyderabad blossomed into a beautiful and well laid out city. What began as the Muslim citadel in the Deccan had now acquired its famous cosmopolitanism. But the common people of Hyderabad, like other princely states, remained excruciatingly poor. The Hyderabad model of development ended a few miles out of the city where the wide and smooth concrete roads terminated into narrow and pockmarked bitumen topped roads. There was little irrigation and the only sign of any government usually was the police station.

Thus, in the aridness of the Deccan, a fertile ground was created for a popular communist movement, which morphed into India’s first armed insurrection. This was the first Telangana movement, which was terminated on orders from Joseph Stalin himself. Stalin also saw in that Telangana movement the glimmerings of Maoist dogma that postulated that the villages would strangle the cities and take over the state. In the first Lok Sabha election of 1952 the Communist leader Raavi Narayan Reddy won Nalgonda with a plurality that exceeded even Jawaharlal Nehru’s margin in Phulpur. After Stalin’s diktat that it will be the workers who will spearhead the revolution, the Communist Party of India reverted to trade unionism, which it soon discovered was a far more lucrative proposition than the grind of revolution in the hinterland.

By the mid 1960s, things were heating up again. I remember long afternoons in the canteens of Nizam College and later in the Arts College of Osmania University in heated and passionate discussions on the desirability of a separate state. My good friend S Jaipal Reddy, now Union Minister, earned his political spurs as the Congress Party’s student leader championing a unified Andhra Pradesh. Jaipal, who had a long innings as Osmania University’s unchallenged student leader, during which time he took three Master’s degrees, lost his student constituency but went on to bigger things. Many of our more ideologically committed contemporaries took to the gun and joined the now resurgent Naxalite movement in the forests of Telangana, inspired by Communist ideologues like Vempatapu Sathyanarayana and Adhibatla Kailasam. When they were killed in Jalagam Vengala Rao’s (then Home Minister) reign of terror, Kondapalli Sitaramiah took over and greatly expanded the Peoples’ War Group. In this manner, the original Telangana movement revived.

In 1969, the bleak prospects in the real world agitated the students of Osmania University enough to launch a separate state movement. This movement was seized by Congress dissidents like M Channa Reddy, a charismatic leader whose commitment to a separate Telangana was only exceeded by his hunger for an office of profit. Under his leadership, over three hundred students lost their lives but the hacks of the Congress party were satisfied with the removal of Kasu Brahmananda Reddy and the promise of office. But instead of Channa Reddy, Indira Gandhi found PV Narasimha Rao more convenient. But the cleavage was deep and clear. When my father retired from the IAS as the First Member of the Board of Revenue, holding the rank of Chief Secretary, the Telangana IAS and IPS officers hosted a separate farewell for him at the Dilkusha guest house, in addition to the usual farewell by the IAS association.

Soon the agitation revived, but now in both parts of the state. The Andhra side too now wanted a separate state and the Telanganites resumed their agitation. But in reality, all they wanted was the removal of Narasimha Rao. Indira Gandhi had no choice but to kick PV Narasimha Rao upstairs as a Cabinet minister in her government. This done, the Congress Party went back to business as usual, till the advent of KC Rao, who was a Deputy Speaker under the Telugu Desam dispensation of Chandrababu Naidu. KCR fell out with Naidu, and guess what he took to next? A separate Telangana!

But let’s take a step backward. Till 1998, the BJP supported a separate Telangana, as it had other smaller states like Chhattisgarh, Jharkhand and Uttaranchal. But when the election manifesto of 1998 was being written, LK Advani insisted that the reference to a separate Telangana be removed from the manifesto as he had promised support from Chandrababu Naidu. It was only after Naidu deserted the NDA that the BJP once again begin espousing a separate Telangana. Such was the strength of commitment of our national parties to the cause!

The integration of the Telangana region of the erstwhile Hyderabad state and Andhra region of the old Madras state in 1956 was intended to be a trial marriage. The Andhras of Madras were the ones who wanted a Telugu state. It was originally a rallying call of the communists that was deftly appropriated by ambitious Congressmen in Madras wanting a more active share of the pomp and prize of high offices, not possible in the composite Madras state. The people of Telangana always had doubts about this union, and the vivisection of Hyderabad state. It took all the charm and authority of Jawaharlal Nehru to persuade Telangana Congress leaders to accept a trial. Nehru cajoled them to give it a try for five years. For a leader as tall and big as Nehru, when he gave an assurance, it was taken.

The case for a separate Telangana was not based on an economic argument then. Our story is of a deep cultural divide between two peoples united by language but divided by habits, values, history and culture. We know that language alone cannot be the basis of statehood. German is spoken in Austria as well, but Germany and Austria are different countries. Ukrainian and Russian are 90 per cent identical, but they are separate countries. In India, the four BIMARU states (Bihar, MP, Rajasthan and UP) have dozens of dialects latticed together by Hindi. Yet they are separate states. Language, like religion, cannot be the sole basis of nationality. The story of Pakistan tells us we can never be united by religion alone. The story of Germany and Austria tells us we can never be united by language alone. And the story of Spain and Portugal tells us we cannot even be united by a confined geography.

India is a vast mosaic of peoples where colours, sounds, shapes and landscapes change every few hours of road travel. To argue that all Telugu speaking people are one is nonsensical. No state in India, even a small one like Nagaland, can claim a monochromatic oneness. In Nagaland, behind every successive ridgeline there is another tribe speaking a different language and wearing a different tartan. Tangkhul and Angami, or Konyak and Ao are as different as Telugu is from Tamil and Bengali from Oriya. Andhra Pradesh is not an exception.

Now a Telangana has been granted. Hyderabad will be the joint capital for the next ten years during which period Seemandhra is supposed to build itself a new capital. Till then, it will be home to two of everything in government and administration except for a shared Governor. The twin cities of Hyderabad and Secunderabad wait with trepidation. After all, it is the goose that lays the golden egg for the rural based political aristocracy, in many ways more rapacious than the Asaf Jahs and Qutub Shahs. The cities have changed irrevocably. The Andhra settlers are now said to account for almost a third of the population. Having won a smaller state by playing up the traditional differences and stoking animosities, how the new rulers of Telangana will deal with the twin cities has us worried.

Language alone cannot be the basis of statehood. The story of Telangana is of a deep cultural divide between two peoples united by language but divided by habits, values, history and culture
Mohan Guruswamy Delhi

Read more stories by TELANGANA:MEMORIES OF ANOTHER TIME 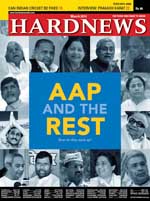