Articulate and insightful, Professor Zoya Hasan has contributed enormously to the study of Indian politics, parties, social mobilizations, and gender and identity discourses. In a conversation with Hardnews, she attempts to make sense of the 2014 general election and the frenzy in the run-up to it

On the Modi wave and the anger against the Congress…

There is no Modi wave as such. It would be wrong to call it that. Even when you look at the opinion polls, despite their inadequacies, none are giving the BJP more than 220 seats. Now, even this number is a good 50 seats short of a majority. How can one call it a wave, then? In 1984, when there was a Congress wave, they managed to win 419 seats. That qualifies as a wave. This Modi wave everyone is talking about is largely a creation of the media. There is a certain section, including the middle classes and the corporate, who want the Congress government to go. This is despite the fact that they have benefited from the Congress regime. There is basically a great sense of anger against the welfarist agenda of the Congress. these sections don’t want any pro-people welfare policies. Look at the way the media reacted to the pro-people welfarist promises in the Congress manifesto. Moreover, the anti-corruption movement led by Anna Hazare, which had the support of the middle classes, the corporate and even the RSS with known figures like Ramdev and Sri Sri Ravishankar, too, caused great grief to the Congress. It could not recover from the blow this anti-corruption movement dealt it. The BJP simply rode on the popularity of this movement and stepped up the ante against the Congress with the media on its side. Also, the Congress has done many things belatedly. They were late with the Food Security Bill. That could have been done in 2012 for it to show some effect. Even the Lokpal Bill, they were forced to do it. In that sense, they not only underestimated Modi, but AAP as well. They also underestimated the anti-corruption movement which seriously damaged them. On Modi, though, I don’t think the Congress really underestimated him but, given the anti-Congress mood and Modi emerging as an alternative leader, they were caught in a bind.

Moreover, one saw unprecedented corruption cases in the last five years, with many leaders making sweetheart deals with big businesses, but the anger magnified because of the pro-poor agenda of the UPA. It is significant that the party has not budged and has promised a continuation of those policies in its manifesto.

On the government’s announcement on Jat reservations...

It’s not surprising the government went ahead with this announcement. They seem to have done it with a very narrow view, thinking the Congress will get Jat support in states like UP, Rajasthan and Haryana. As a community, they don’t deserve reservation because they have not really suffered any major disadvantage or deprivation, nor are they economically backward to make them eligible for any such affirmative action. In that sense it is not a very wise move. Also, it will hurt the Congress party’s prospects in UP where the Muslims see Jats as perpetrators of violence against them in the Muzaffarnagar riots. This is strange, given that minorities are yet to get any affirmative action while Jats have been granted this right before the elections.

On the unexpectedly good performance of the Congress party in UP in the 2009 elections and whether it can repeat that
in 2014...

The Congress managed to cross the 20-seat mark primarily because the Muslims in UP were upset with the way Samajwadi Party chief Mulayam Singh Yadav went all out to woo Kalyan Singh, who they see as a Hindutva icon. They deserted the SP and voted for the Congress instead. The chances of that happening again in 2014 are very bleak. Although the Muslims may be upset with the SP for its mishandling of the situation in Muzaffarnagar and the subsequent riots which killed many, they may not see the Congress as an alternative as they perceive the party as an ally of the SP, which has not been very vocal about the situation in Muzaffarnagar. It has failed to adequately attack the SP for its inability to contain the violence. Moreover, it also suffers on the organizational front. The Congress has not been able to revamp the organization yet. In my reckoning, the Congress will only manage what it had in the 2004 elections when it could win around 10 seats.

On AAP and Muslims…

Some sections of Muslims have started to see AAP as a decent alternative in the hope that it may be able to stop Modi. There is no denying that many Muslims have started to see it as an alternative to the Congress. This is also because of its clever strategy, wherein they are trying to weaken the Congress and emerge as an alternative centrist force in its place. This is why attacking Modi has become a necessity for Kejriwal – not just to occupy prominence in media but also because this election is centred on Modi. There is no way AAP can be seen as a credible alternative if you don’t take him head-on. In that sense, there was no way out for Kejriwal on that front. Also, one must accept that the popularity of AAP is on a decline. They are unlikely to perform well in constituencies
outside Delhi.

This is an interesting aspect. There is a generational shift in the Congress and the bulk of the support for Rahul Gandhi is coming from some of the younger leaders. Until recently, the old guard, said to be close to Sonia Gandhi, was feeling left out and also some of the comments coming from Rahul lately that it’s the senior leaders who are spreading despondency and so on suggest that there are differences on a number of issues ranging from candidate selection to election strategy. There are two kinds of differences in the Congress. The ideological differences on economic reforms, and factional differences. There have always been factional differences within the Congress but, interestingly, for the last few years, nobody is discussing that because the party is too centralized around one leader and Sonia has been able to establish influence. But what we are seeing now is a transition which is taking place from the old Congress to a new Congress. All transitions have some conflicts and turmoil; there is an internal turmoil going on within the party. However, this transition is relatively smooth if you compare it with the BJP, where the tussle between Narendra Modi and LK Advani, Sushma Swaraj and Murli Manohar Joshi is all out in the open. There is not any serious challenge to Rahul’s primacy as of now. But if the Congress does badly, as is being predicted, and gets under 100 or under 80 seats, then of course the knives will be out against Rahul. What is actually interesting is how parties are getting reshaped. In the BJP, Modi has established complete control. In the Congress, we see Rahul trying to reorganize and democratise the party. So far he has not been very successful but he is at least attempting to do that. 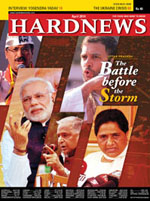