At the age of seven, Kajal, 30, realized she was different. Born biologically a boy, and the eldest of three siblings, Kajal says she loved wearing her sister’s frocks. Cast out by her family when she began to dress like girls, Kajal, who had nowhere to go, joined the hijra community. She started dancing at weddings and begging on roads to support herself. She also worked as a sex worker to earn some money.

The Supreme Court judgment on April 15, 2014, which recognized transgenders as the third sex, has come as a huge relief for Kajal. Wearing a heavily-embroidered, jewelry-adorned colourful sari, Kajal said she had mixed feelings. “The judgment has opened one door for us, but there are other doors that need to be opened,” she said, as many in the crowd exchanged greetings, hugging and congratulating each other.

The court, in its ruling,  said that the recognition of transgenders as a third gender was not a societal or medical issue, but a human rights one. Justice KS Radhakrishnan, who headed the two-judge Supreme Court bench, said that society often ridicules and abuses people who do not identify with either fixed genders, and does not realize the trauma, agony and pain that transgender people go through. “Society treats them as outcasts and untouchables, forgetting that the moral failure lies in society’s unwillingness to contain or embrace different gender identities and expressions, a mindset, which we have to change,” the court noted.

Welcoming the judgment, a song-and-dance meet was organized at Jantar Mantar, which saw the participation of many transgender people. Laxmi Narayan Tripathi, a transgender activist, addressed the gathering with a resounding, “Jai Hind. Now India belongs to us as well.” As the crowd swelled to celebrate the LGBT rainbow, Tripathi thanked the Supreme Court for the decision protecting the rights and freedom of all transgender persons in the country.

Prominent human rights lawyer Anand Grover said it was a historic day. “Suppression of transgenders was a loophole in our system,” he said. Swami Agnivesh of the Arya Samaj was also present to lend his support to the community. “We welcome the judgment. It has opened new possibilities and vision for the transgender community and has given a new hope to people,” he told Hardnews.

The writ petition that sought equal rights and protection for transgenders, including the recording of one’s chosen gender identity in documents as well as non-discrimination in employment, was filed by the National Legal Services Authority (NALSA) in 2012. In its judgment, the Supreme Court acknowledged the rights of transgenders under Articles 14, 15 and 16 of the Constitution, which ensure equality and non-discrimination before the law.

Abhina Aher, a transgender activist, said the judgment was a turning point for transgender freedom and equality in India. “It is particularly heartening that the judgment allows people to self-identify as male, female or of a third gender, based on their choice. We feel this ruling will have significant implications for the wider LGBT rights in India,” she said.

Simran Shaikh, another transgender activist, said the judgment had created a new wave. “The mythological reality has been accepted by the court. We are thankful to the SC for giving equal status to us,” said Shaikh, who is doing a PhD on transgender rights.

Calling it a “fabulous decision, and a great step forward for the LGBT community”, Shaleen Rakesh, who manages the ‘207 against 377’ campaign at India HIV/AIDS Alliance, said, “The government needs to decide if all Indians deserve the protections enshrined in our Constitution. The LGBT community must be allowed to enjoy the basic rights of citizenship.”

According to an estimate, India has about two million transgender people who are discriminated against and ostracized by society because of their fluid gender identity; they often live in poverty, making a living through begging, dancing and prostitution.

PUCL (K), in its 2003 report titled “Human Rights violations against the transgender community”, said there is a significant lack of understanding of transgender people as human beings whose lives encompass a complexity that goes beyond the normative correlation between biological sex on the one hand and gender identity and sexual orientation on the other.

Legal scholar Upendra Baxi, in the foreword to the report, said, “The dominant discourse on human rights in India has yet to come to terms with the production/ reproduction of absolute human rightlessness of transgender communities.”

But the Supreme Court judgment has recognized them as citizens of India “who must be provided equal opportunity to grow.” The judges said that the transgender identity should be treated on a par with other minorities officially categorized as “socially and economically backward”, to enable them to get quotas in jobs and education.

Monika Singhal, an advocate with the Supreme Court of India, said the identity of a person is as important as their rights. She called the judgment a “mere recommendation, as the whole process needs the help of legislation to implement”. Singhal has been involved with research on transgender rights and has written extensively on the subject.

“Most of the transgenders I talked to after the judgment had no clue about it. They follow what their gurus tell them and pay hafta to them,” Singhal said. “Society needs to treat them as normal human beings. They have been given fundamental rights, but the purpose is not achieved. The judgment doesn’t talk about sex workers who are illiterate getting jobs or transgenders who cannot pursue education as they have no interest or are too old,” she said. She also added that the court has not talked about their matrimonial rights. “The court has given them an identity on ration cards, passports etc, but what about their desires?” she asked.

Transgenders have held an important place in ancient Indian culture. In Hinduism, they invoked shiva-shakti, the image of Shiva as half-male and half-female, representing a god who is ageless, formless, and sexless. Even in the greatest epic, Ramayana, they find several mentions. When Rama is banished for 14 years, while leaving, he turns around to see a large number of people following him. Ram appeals to ‘all the men and women’ to return to the city. Hijras, belonging to neither category, stayed with him. Impressed by their devotion, Rama sanctions them the power to confer blessings on auspicious occasions like childbirth, marriage, and inaugural functions.

In medieval India, too, they played a prominent role in the royal courts of the Mughal emperors and some Hindu rulers. Some held sanctioned positions in the royal court for guarding the concubines as they were preferred to male guards since their sexless status ensured that they wouldn’t seduce the women of the harem.

They fell from grace during the British colonial rule when the Criminal Tribes Act of 1871 categorized the entire transgender community as “criminals” who were “addicted” to committing serious crimes. They were arrested for dressing in women’s clothing or dancing or playing music in public places, and for indulging in gay sex.

“…I found it extremely painful. Many of these people (transgenders) had to give up so much of their lives. Sometimes their parents would reject them, siblings, their own children, and then their divorcing spouse would forbid them from seeing their children. It was so awful, but why did they do it at 40 and 50? Because they felt they had to affirm themselves before they would kill themselves. And indeed, the rate of suicide among untreated transgendered people is among the highest in the world,” said Norman Spack, a paediatric endocrinologist at Boston Children’s Hospital, at a TED talk.

But India is not the first country to recognize transgenders as the third gender. In 2007, the Supreme Court of Nepal ordered the government to scrap all laws that discriminated on the basis of sexual orientation or gender identity. In 2012, Bangladesh followed suit.

Till recently, transgenders in India were not allowed to stand in elections because they were neither male nor female. The Madhya Pradesh High Court in 2003 upheld the order of an election tribunal, which had nullified the election of a transgender, Kamala Jaan, to the post of mayor of Katni, on the ground that it was a seat reserved for women, and that Kamala, being a “male”, was not entitled to contest the seat. Similarly, another court held that her being biologically female annulled the election of Asha Rani as the mayor of Gorakhpur. It was only in 2009 that India’s Election Commission took the first step by allowing transgenders to choose their gender as “other” on ballot forms.

After the SC judgment recognized them as the third sex, 53-year-old Bharathi Kannamma, a transgender, is running as an independent candidate in Madurai, Tamil Nadu, for the 2014 Lok Sabha elections. “When people come to meet me, they have certain set notions. It is only when they hear what I have to say and see me in person that they can get past the fact that I am a transgender,”Kannamma told AFP.

The LGBT community now feels there is a need to do something about Article 377, which penalizes same-sex intercourse with up to 10 years of imprisonment.

In December 2013, the Supreme Court overturned a 2009 Delhi High Court verdict and upheld the colonial-era Section 377 of the Indian Penal Code. In a curative petition filed by the Naz Foundation Trust and other non-government organizations, the Supreme Court agreed to hear arguments challenging the apex court’s December verdict criminalizing same-sex intercourse on April 22, 2014.

“The court has rectified its one mistake, now it needs to look at its other mistake,” said Vimal, an activist with Delhi Queer Pride. While the activists demand repealing the “dark act”, advocate Singhal said it should rather be amended. “There is a need to amend many laws, including Article 377, to give sexual minorities their complete rights,” she said.

Even though a quota has been reserved for them in education and jobs, the transgenders say they will continue with their traditional profession. “Earlier, no one wanted to give us jobs. But now we are hopeful that it will change. Given a chance, we will do regular jobs too,” said Shaikh. But the struggle is not over yet. “We will continue with our advocacy and take initiatives to make people aware. The mindset of the people needs to be changed,” she added.

Highlights of the SC judgment

• The judgment has given the transgender the right to choose gender. Apart from an Aadhaar card and a few other government documents, there were no options to declare a ‘third gender’.

• It has given reservation for the transgenders under the OBC category to pursue education or for any government employment schemes.

• After the judgment, transgenders need not undergo a sex reassignment surgery to prove their gender.

• It advocated proper measures to provide them separate public toilets and
other facilities.

Read more stories by A Rainbow of Identities 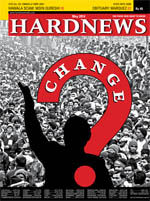