On May 24, 2014, at the jam-packed Press Club of India, Aam Aadmi Party (AAP) leader Shazia Ilmi announced her resignation from the party. The “difficult decision was triggered by the lack of inner-party democracy, crony clique who run the party, and the jail-bail imbroglio of Arvind Kejriwal”. Ilmi added that she felt “marginalized because I became the voice of
dissent in the party”. Another AAP member, Captain Gopinath, also quit, citing growing differences within the party leadership, besides criticizing Kejriwal for his “shoot and scoot” politics.

Do the resignations of Ilmi and Gopinath hint at the crumbling of the AAP, which grew out of an anti-corruption movement in the country? Though the omens of the fall had started a little earlier, after its spectacular win in Delhi, the continuous mistakes kept scratching the scars.

The first mistake that the party made was to make light of the vigilantism antics of its law minister, Somnath Bharti. On January 15 and 16, Bharti had led a mob in conducting a midnight raid on South Delhi’s Khirki Extension, after being tipped off by residents about a drug racket in the area. The African nationals residing in the area were roughed up and allegedly beaten up. Despite protests by the media and people, the party continued to defend the errant minister and his racist act. AAP leader Yogendra Yadav, in an interview, admitted that “the party failed to anticipate the loss in public perception after the episode and came across as shielding someone who has done something wrong”.

In February, Madhu Bhaduri, a former diplomat and one of the founding members of AAP, quit the party following the National Council Meet where she was “heckled for introducing a resolution condemning Bharti’s role in the midnight raid”, even as the outfit rubbished the charges. She said “the party has the mentality of a khap panchayat and has no space for women”.

In February, another AAP MLA, Vinod Binny, was expelled from the party “for publicly making false statements against the party and its leadership”. The former AAP legislator from Laxmi Nagar had criticized Kejriwal and opposed the party’s policies, accusing them of “deviating from the core principles.” This was another blow to the year-old party, which had won 28 seats in the Delhi Assembly elections.

The AAP government in Delhi, formed with the support of the Congress, was little more than a prolonged dharna. The muffler-clad chief minister cracked a whip on the “sloth and corruption in the police”. But Kejriwal failed to make the transition from being an activist to an important public office holder. The dharna that followed only amplified the unseemly nature of their functioning. In a candid admission to a news channel, Yadav had said that the Kejriwal government did give the impression of being in “a hurry to do things”.

But the biggest mistake that the party made was quitting  governing Delhi, 49 days after winning a decisive mandate. The hasty resignation over the thwarted efforts to pass the Jan Lokpal bill in the assembly caused a major dent in the image of the party, which had raised hopes among the people and promised an alternative politics. Immediately after his resignation, Kejriwal — who was called bhagoda, ordeserter by many — decided to take on Bharatiya Janata Party (BJP) prime ministerial candidate, Narendra Modi, in Varanasi in the Lok Sabha polls.

In March, Kejriwal proclaimed that the party would win more than 100 seats. “There’s tremendous anger among the people against both the Congress and BJP. Wait for May 16 when the results will be announced,” he had said. The party fielded 432 candidates in 543 Parliamentary seats. On April 10, he tweeted his political assessment, saying, “AAP getting 6 to 7 seats in Delhi.”

On May 16, as the results of the world’s largest democratic elections poured in, the mood at the AAP office in 41, Hanuman Road was sombre. There was no drum-beating or sweet distribution, no color-splashing or broom-waving. The miracle of Delhi had failed to replicate; of a total of 432 candidates fielded by the party, it was able to seize only four of the state’s 13 Parliamentary seats in Punjab. The party drew a blank in Delhi.

A visibly shocked Kejriwal told the media that he respected the people’s verdict. “This was our first general election. It is a good start, though we are a bit upset over the Delhi results. We could have done better in the national capital,” he said. Hailed as a David after he defeated three-time chief minister Sheila Dikshit in the assembly elections in 2013 by over 25,000 votes, Kejriwal lost to Modi by 371,784 votes in Varanasi. Other party stalwarts like Yadav, who contested from Gurgaon,  Ilmi (Ghaziabad), poet-turned-politician Kumar Vishwas (Amethi), Mayank Gandhi (Mumbai), all lost badly.

In Varanasi, while Kejriwal was banking on the support of Muslims and rural voters, he failed to gauge the intensity of the Modi wave, and got swept away. He also lost his support base in Delhi, with the party losing all seven seats.

The party chief had gone hammer and tongs after Modi, turning the fight against corruption to a fight against Modi. This is also being seen as one of the reasons for the party’s drubbing at the national level. Observers say that AAP was still seen as a regional party. The mandate was against the Congress, and AAP was not even on the radar of the voters when it came to choosing an alternative to the Congress at the Centre.

Another reason being proffered for the party’s rout is that it could only mobilize urban voters. AAP failed to reach the rural pockets of the country where people have been voting for the traditional parties.

In the Delhi Assembly elections, AAP was voted as number two in every constituency. But in the 2014 elections, voters were not looking for a secular government; rather aspirations were related to development. AAP had a good agenda — anti-corruption as well as pro-secularism but it failed to convince voters that it had any blueprint
for development.

Besides that, Kejriwal’s indecisiveness, underestimation of the Modi wave, and over-confidence, made people lose their faith in the party. “Had he continued in Delhi, we could have concentrated on Haryana, Punjab and Delhi to swing more seats. We kept warning the party leadership, but they had become so unapproachable that we had no possible means of communicating our fears to them,” a senior AAP leader had told the media. Even Ilmi had said that AAP needed to evolve and not just assume. “It has to move beyond agitation.”

AAP leader Sanjay Singh admitted that the party failed to galvanize support for issues over personalities. “We failed to inspire people to vote for issues and not personalities. Though we did not make mistakes as far as our strategy and effort are concerned, we could not change the thinking of the voters. If we can’t change this mindset, then it will be difficult for the party to survive,” he told media. Yadav said he had assumed that the miracle of Delhi could be replicated in the country. “The process takes a lot of time. It was the party’s first national election. We have said this before and I am saying this again. The first election is for being defeated, the second for defeating and the third is for winning.”

Ashutosh, who contested from Chandni Chowk, said the resignation of the Delhi government left many disappointed. “During the Assembly polls, a certain percentage of people who had voted for us said they would vote for the BJP in the Lok Sabha polls. This percentage may have increased in the last few months,” he told the media.

Though  AAP garnered an impressive vote share of 24.36 per cent in Punjab — Faridkot (Sadu Singh), Fatehgarh Sahib (Harinder Singh Khalsa), Patiala (Dharam Vira Gandhi) and Sangrur (Bhagwant Mann), it fell short of numbers to obtain the status of a national party. In Delhi, the party gained 32.9 per cent and in Haryana 4.2 per cent of the vote share. It also finished second behind the BJP in all seven Lok Sabha constituencies in Delhi, pushing the Congress, which held all seven in the outgoing House, to a distant third.

Insiders in the party say the party’s city in-charge, Ashish Talwar, was extremely unpopular among the volunteers. Ilyas Azmi, its political affairs committee member, blamed Kejriwal’s “autocratic style of functioning” for the debacle. “The party has no performance anywhere except Punjab. The reason is that one man — Kejriwal — hijacked the decision-making process in the name of swaraj. There is no inner party democracy. A political affairs committee was never consulted either before leaving the government or in the matter of ticket distribution. It’s just the Arvind-Manish Sisodia clique that is running the party,” he told media.

Besides the non-cooperation among the party members, AAP’s fielding of too many candidates, mostly unknown, can also be seen as one of the reasons for the party’s dismal performance. For 446 constituencies, AAP would have needed a minimum fund of Rs 892 crore.  AAP was able to raise about four per cent of that figure, which was not enough. As many as 98 per cent of its candidates lost their deposits in many constituencies. Kejriwal, who was taken into custody by the Delhi Police in connection with a defamation case filed by the BJP’s Nitin Gadkari, failed to focus on other constituencies where candidates were left to fend for themselves. The verdict served as a warning to AAP for its reckless
national expansion.

No doubt AAP did shake up the political establishment, where people flocked to support it to make it the second largest party in the Delhi assembly, but its general incompetence, and losing touch with the ground reality disillusioned the voters. Despite a poor show of numbers, the AAP’s biggest contribution was the manner in which it changed the contours of political discourse. Had Kejriwal stayed on in power in Delhi, AAP could have become the strong third alternative people of this country had been waiting for. Instead, the party let things fall apart. If AAP wants to regain the trust and support of the common people again, it has to pick up from where it left off, but this time with more seriousness and a clear direction. 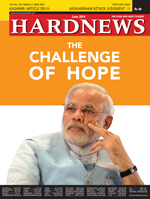