Every time there’s a ceasefire violation between India and Pakistan, TV anchors in India involuntarily start frothing at the mouth. Some of them would not be averse to trading their studios for an outpost to wage war on Pakistan. They believe, rightly, perhaps, that India’s foreign policy towards Pakistan is made by those who watch their noisy programmes. That includes many of the politicians who are reluctant to get caught at the firing line, both at the border as well as in the TV studios. Chat shows are increasingly becoming the ‘voice’ of the nation. There perhaps is no greater travesty than when judges, ministers and influential persons watch news channels to gauge public opinion, even when everything of any importance is interrupted by a commercial break.

It was, therefore, expected that the Secretary-level talks between India and Pakistan — announced with great fanfare when the new government took charge — would be postponed on the specious pretext that Islamabad’s High Commission in Delhi met separatist leaders from Jammu and Kashmir. High Commission stated that they had been speaking with the separatists long before any talks were slated and the government of India had felt nothing amiss in that. As a correspondent who has covered India, Pakistan and the Kashmir issue for long years, it’s difficult to believe that the new government could actually call off the talks with Pakistan on this issue rather than on the spike in ceasefire violations between the two countries. If Prime Minister Narendra Modi was laying down the terms of endearment between the neighbours during his election campaign, wasn’t cross-border firing a more compelling cause for abandoning any move to restore normalcy? After all, how does the HC discussing Kashmir or any other issue impact the Secretary-level discussions between the two countries? The Hurriyat comprises a bunch of obscurantist Kashmiri leaders like Syed Shah Geelani who have always believed that the Kashmiris were denied the option of joining Pakistan after 1947. His interpretation of the Kashmiris’ right to self-determination since then has been overwhelmed by those who see salvation in azadi — a little Switzerland that has been guaranteed independence by UN and Western powers. This has been the dream of those who quickly realised that Pakistan was hurtling from one disaster to another and there was little rationale to align Kashmir with them. The Kashmiri narrative has been changing for the past 65 years and India has not really been worse-off from these changes.

Speaking at a recent panel discussion on a TV show, I asked a former diplomat — known for his strong views on Pakistan — whether Indian interests or the subsequent dialogue between the two countries were hurt by Pakistani diplomats talking with the Hurriyat? I got no answer. What I got instead was an assertion that the past many years had seen Pakistan more politically intrusive in India than earlier. This was definitely a new theory I was fielded with. Does this imply impatience with the people who take a contrarian position to that of frothing anchors or hate-mongering politicians? If a liberal attitude is seen as unacceptable, there is a strong possibility that those who like this article on my timeline on Facebook may at some stage end up being on the wrong side of the law. After all, there isn’t an absolute interpretation of any law of what constitutes a crime as it invariably rests on who is in power and who out of it.

In a liberal and secular social order, there is always space for different points of view, including extreme ideologies. But what is not recognised is how it has helped the country. Not only have border violations been low, there has been a dramatic reduction in communal violence in the country. Contrarily, if one looks at Pakistan, it has been savaged and brutalised by those who have interpreted the country in narrow, sectarian and communal lines. The absence of accommodation for other points of view has brought untold misery to those who believe in a fair and just order, untainted by prejudices and biases and misreading of history. India should learn from its neighbour, Pakistan, about what it should not do to preserve social harmony and communal amity. Sometimes we end up behaving like those we hate. 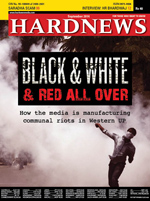