Driving Past Caste: End of the Kaali Peeli Taxi and the Stand

Application-based cab aggregators have disrupted old business models. Hiring drivers was once the preserve of old taxi stands who relied on various forms of kinship such as regionalism and caste

As the taxi sped through empty Delhi roads, the driver turned back and ruminated, “Everything is so different now. The old taxi stands are dead, they have no purpose anymore.’’ Digital taxi aggregators, such as Uber and Ola, have changed the way we hail or book a taxi and in turn, have disrupted the established taxi business.

However, this isn’t all that has been transformed by this technological innovation. These operators have also transformed the way taxi drivers are now hired, overthrowing the old system of recruitment and incorporating a more contemporary process.

The success of these aggregators rests largely on their ability to get drivers with commercial licenses to come onboard. In their drive to get them to hitch themselves to an Uber and Ola, they are breaking kinship and region based modes of recruitment, resorted to traditional taxi stands. In the past, communities such as the Yadavs and Singhs would run these businesses. Driving jobs usually went to people from the village or those who belonged to the same caste as the owner. In the process, those who did not fit these qualifications were filtered out from these taxi stands.

Now, application-based cab aggregators have transformed these old hiring paradigms. Background checks and verification by the company have trumped regional or kinship-based boundaries. Samuel, a driver with one such aggregator, believes that these companies do more for the drivers than taxi stands.

Mukesh, a driver with Uber, told this reporter, “We are very happy with this model, we are not bound by working for someone else, and can earn for ourselves and on our own terms.”

An important movement that has taken place is that the driver and the client now deal directly with each other, either through cash or online transactions. This direct transaction has removed the intermediary — the owner of the taxi. Drivers now no longer have to be at the mercy of their owner.

This change has far-reaching implications for commercial taxi operations. Old taxi stands in Delhi are struggling to remain relevant and viable after digital app-based taxi services opened up this occupation to the largest possible number of people. It’s no longer bound by cultural restrictions, as more and more people are making the shift to this system.

Drivers from hotels, private companies and old taxi stands are now joining the ranks, as success stories reach new ears. Freelance insurance agents, or people who work in shifts are making use of the spare time to run their personal cars as taxis, operating in peak hours to take advantage of the heightened demand.

Most evident has been the way in which these aggregators have snatched up the local travel business from these stands. A conversation with Surinder, a taxi stand owner in South Delhi, reveals that the old drivers have left, with many putting out their cars with Uber/Ola. It has been easy to make this decision, as they will get assured passengers and it allows them to break free from their salaries. Companies such as
Uber also help taxi drivers to get financing to purchase new cars. Now many drivers in large metros are primarily buying diesel cars.

However, owners of taxi stands have opposed this new system, pointing to a long-standing tradition of plural stands, where people came from everywhere. They are the ones that are making the most noise about failings of the new service.

City governments are struggling to countenance the app-based cab aggregators in their endeavor to protect traditional taxi and auto services. Earlier this September, in Delhi, leading companies have had their permits rejected. This effectively bans these companies from operating in the national capital until they comply with the standards that the City Taxi Services Act has laid down.

There is a lot information asymmetry, accentuated by the lack of clarity on the regulatory environment in which app-based taxi services operate. No one really knows whether the taxis are banned or allowed to run in places like Delhi. Drivers, therefore, are in the dark about their future and that of Uber and Ola. Regulation may try to catch up with technology, what we are seeing, though, is the democratisation of an industry, which has overwhelmed cultural and traditional barriers. The unintended consequences of technology have taken this sector to new heights and soaring revenue generation. 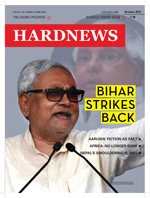