Doctored Tapes, and a Doctored Speech

The year 2016 dawned with bad omens for Indian democracy. The five Dalit research scholars of the Hyderabad Central University (HCU) who were expelled from their hostels and punished with what could be best described as a social boycott might not have had an inkling of what it would bring them. The inhuman punishment, reminiscent of the classical treatment of caste panchayats, and the abominable behaviour of the university administration drove one of them — Rohith Vemula—to commit suicide. The sparklet of protest in the HCU campus soon turned into a countrywide conflagration. Its heat compelled the HCU administration to revoke the punishment for the four surviving scholars. But it proved too little and too late for reconciliation.

The scholars, now backed by Dalits the world over, declined to accept it and decided to continue with their agitation until the culprits who caused the death of Vemula were punished. The Joint Action Committee for Social Justice, demanding justice for Vemula, decided to have a ‘Bus Yatra’. It was attacked by the saffron goons at several places, but, undeterred, it carried on and reached Delhi to join the ‘All-India Dilli Chalo’ protest rally on February 23, as planned.

While the flames of this struggle were getting lit, another episode broke out —sparking off yet another confrontation between the State and the students. This time, it began in the hallowed institution of JNU, which prided itself on its exemplary campus culture of democratic students’ politics. In a cultural evening organised by a section of students in observance of the third anniversary of the hanging of Afzal Guru, which was vociferously opposed by the BJP’s students’ wing, the Akhil Bharatiya Vidyarthi Parishad (ABVP), some elements with masked faces in the crowd allegedly raised anti-India and pro-Pakistan slogans.

As though it was not draconian enough, jingoist passions were whipped up through the media, using all kinds of fabrications, demonising the students and defaming the entire university as a den of anti-nationals

Using this as a pretext, the police had arrested the JNU Students’ Union president, Kanhaiya Kumar, and charged other students with sedition and criminal conspiracy. As though it was not draconian enough, jingoist passions were whipped up through the media, using all kinds of fabrications, demonising the students and defaming the entire university as a den of anti-nationals.

The worst was yet to come. Lawyers owing allegiance to the BJP physically attacked the students inside the Patiala House court premises in Delhi with the police standing as mute witnesses. This barbaric series of events was egregiously repeated again under the nose of the Delhi Police when Kanhaiya too was attacked in utter contempt of the Supreme Court’s directives.Even the panel of top lawyers sent by the Supreme Court to monitor the situation was abused and hassled by the BJP goons on court premises. There was a worldwide condemnation of this hooliganism but it failed to shame the BJP, which kept defending its action, repeating the Goebbelsque alibi of patriotism and nationalism against the students. 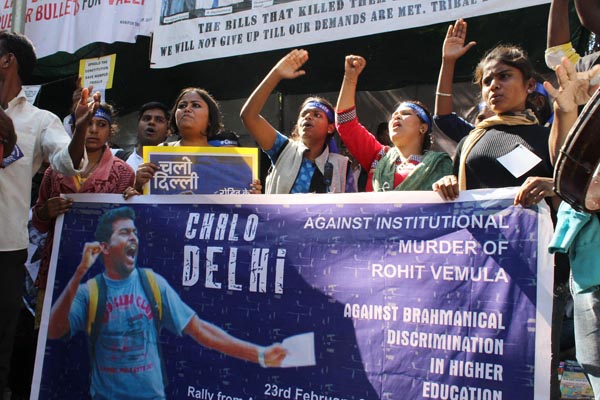 Smriti Irani, one of the culprits, the Joint Action Committee wants punished for causing Vemula’s death, delivered a speech worthy of a demagogue in the Lok Sabha, defending the government’s action in both these episodes. The saffron camp went gaga over her speech, which it thought refuted all charges against the government and completely pulped the opposition with facts and figures and, above all, powerful oratory. Irani, who is called by the Dalit groups ‘Manusmriti’ in the social media for her zealous promotion of the Hindutva agenda, is a known master of theatrics, her only winning credentials for her present post in the government, having played an enchanting Hindu bahu in a popular television soap, ‘Kyunki Saas Bhi Kabhi Bahu Thi’. Unfortunately for her, the Lok Sabha is not a television screen. The value of the speech is to be judged by its content and not by its theatrical value. From this perspective, her speech, which had public endorsement from none other than the Prime Minister, may be easily seen as fraught with empty rhetoric, mixed with deliberate lies and completely dodging the core issues thrown up by these episodes.

Even before this speech, Irani’s intervention in Vemula’s case had similarly witnessed her putting her foot in her mouth, especially when she claimed that the committee which awarded punishment to the five Dalit scholars was headed by a Dalit professor. It was a white lie which provoked the entire collective of SC/ST professors in the HCU to resign en masse from their administrative posts.Another faux pas was her claim that Vemula was not a Dalit. The person who emotionally challenged the opposition to identify her caste was trying to seek a fig leaf of Vemula’s caste, and not his tragedy. Beyond the technicality of his caste, which, anyway, established that he was a Dalit, the fact remained that he met with his fate because both he and the HCU identified him as a Dalit.

Therefore, like both the previous occasions of her intervention in Vemula’s case, she was yet again proved wrong and mala fide in  front of the entire country.  In this speech too, her purported facts to defend herself and the government  proved to be a bunch of white lies. Irani claimed that no doctor was allowed near Vemula’s body to try and revive him, and, instead, his body was used as a political tool. Zikrullah Nisha, an economic PhD scholar, who called the health centre of the HCU immediately after she got to know about Vemula’s suicide on January 17, shouted: “Liar..Liar.” about Irani on her Facebook wall. By now the statement as well as the report of the CMO, Health Centre, Dr Rajashree P is in the public domain.It states categorically that she had reached within minutes, examined the body of Vemula and declared him dead.

This and the pictures showing the Telangana police present at the time of this examination squarely nail Irani’s lie.

The pivotal points of the case relate to why the ABVP’s Susheel Kumar made a false complaint; why Bandaru Dattatreya, BJP MP and minister of state, irresponsibly branded the Dalit students  “casteist, anti-nationals, and extremist” and wrote to her for taking action; why she repeatedly pressured the university into taking action; the university’s flip-flops in handling the issue and its obnoxious punishment. These were points which she summarily skimmed over. Earlier, the BJP had tried to prey upon Vemula’s suicide note in which he did not blame anybody. It was the height of foolishness to expect the note that sought to articulate the inhumane world through his subjective incongruence at the philosophical level to pettily indulge in blaming people. Anyway, it proves that whatever she said turned out to be lies.

Her dealing with the JNU episode was no better. She indulged in half-truths here to justify all that happened and is happening to the students in JNU. She claimed that the Democratic Students Union (DSU) students who sought permission for the February 9 event did not disclose complete facts to the JNU administration. She herself hid the fact that it was the ABVP who made a representation to the administration to cancel the permission it had earlier granted, and, predictably, the administration obliged. She also hid the fact that opposite the Sabarmati Dhaba to which the DSU shifted its venue on cancellation of the permission, the ABVP held its protest, shouting provocative slogans and calling the Left students anti-nationals. She did not clarify whether the ABVP’s protests were permitted by the administration.

The pivotal points of the case relate to why the ABVP’s Susheel Kumar made a false complaint; why Bandaru Dattatreya, BJP MP and minister of state, irresponsibly branded the Dalit students  “casteist, anti-nationals, and extremist” and wrote to her for taking action; why she repeatedly pressured the university into taking action; the university’s flip-flops in handling the issue and its obnoxious punishment

The entire anti-India, pro-Pakistan sloganeering, that she banks upon is not beyond suspicion. Because, while certain sections of the Left students are known to question the political executions of Afzal Guru and Yakub Memon, support self-determination of the Kashmiri people, and condemn the government for its communal misdemeanour, they will never indulge in anti-India or pro-Pakistani slogans. Moreover, it is unlikely that the students who would openly dare to hold a commemorative meeting for Afzal Guru and on Kashmir would hide their faces. This was a well-publicised event, shared widely on the social media many days before it was held. The minimalist inference that follows is that these ‘objectionable’ slogans were raised by outsiders and the maximalist inference is that these outsiders were hirelings of the ABVP itself, so as to create the ground for justifying the disproportionate reaction as in the case of Godhra and Gujarat in 2002. What followed after this nearly confirms the intricate and coordinated planning of the offensive.

In view of the fact that none disputed the shouting of those obnoxious slogans by a handful on February 9, the entire dramatics over the security staff report and so on, becomes irrelevant. What is relevant is who shouted them and the question beyond, whether these slogans amounted to sedition. It is by now clear that Kanhaiya did not shout these slogans and the video that showed him present when they were raised was doctored. The crucial points in the case therefore are the following:

Who doctored the video? Why did some television channels repeatedly use the doctored video and whip up frenzy against Kanhaiya? The entire police behaviour right from the arrest of Kanhaiya to inaction while the BJP lawyers thrashed the students and other activists follows a sinister pattern:  its contempt of the Supreme Court’s order to maintain law and order; its reluctance to arrest the culprits who were seen clearly by the entire world beating people; its ignorance of the threats issued by the BJP lawyers to kill Kanhaiya; its persistence in opposing bail to him. It all amounted to the police being briefed by none other than the Union home ministry. Irani did not speak a word on these issues. Instead, she brought in the issue of Mahishasura worship by Bahujan students in JNU, as though that also constitutes sedition. It is only her ignorance about such cultural contradictions in Indian society that goes against the grain of her imagining them as Hindus. With veterans of the infamous Gujarat Laboratory at the helm, they would like to apply their proven laws of polarising people in the entire country. But they forget that India is not Gujarat and the students are not as gullible as they would like them to be.

Doctored Tapes, and a Doctored Speech

Read more stories by Doctored Tapes, and a Doctored Speech 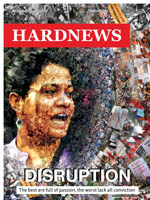