In David Lean’s classic, Lawrence of Arabia, which I saw last week for the first time ever, you can see the classic long distance, high altitude desert landscapes like horizontal paintings with balanced lines, the softness of colour and trajectories, unchanging, eternally changing, etched in the mind before another new, painted canvas on screen takes over the mind. In this epic, as a cinematic journey, you enter the ancient towns of Deraa and Aleppo, in Syria, and you cross the Sinai, where the uprisings still continue despite the blocked tunnels with blocked supplies to the Palestinians, and you enter the fabulous ancient city of Damascus where the Turks, the conquerors of Arabia, have been finally destroyed by the tribes, left wounded in a city without water, electricity and medicine, allowed to rot by the British. In the distance is Jerusalem and Egypt, and across vast deserts of infinite thirst and hunger, and whirlpools of death and dying in quicksand, nothing is distant and sacrosanct, despite the Turkish railways across the desert destroyed by the warring tribal guerillas on camels and horses, representing a mythical, united Arabia.

The tribes, never intrinsically united, die and fight against the Turks, and when they find victory, it is the French and the British who divide the land and the spoils with a unilateral ‘treaty’ in a new status quo of colonial exploitation, driven by artillery, guns, bombs, money and aircrafts. Before they were turned into allies against the Turks, they were bombing the Bedouin tribes in tents with nothing but horses, camels and swords challenging the bombs from the sky. You see this film, and you find that nothing has changed in ‘Aden Arabia’, where tribes are still fighting tribes, used and discarded by the western powers, with tens of thousands dead, ravaged, exiled, brutalised, trafficked, raped and turned into sex slaves and refugees in their own imagined homeland.

On TV news (not on Indian channels, surely), you can see Allepo now, turned into a metallic installation, like melted rubble, its buildings melting into each other under a scorching sun, fractured like ravaged sculptures, with  people trapped inside, without food, waiting to be captured, waiting to die. Yesterday, I saw Derra again on Al Jazeera and I remembered the film. Caught in a massive whirlpool of bloody war, Derra is back to its past, even as refugees, fleeing women and children crossing the river Euphrates, are killed in cold-blood by the ISIS, while Fallujah waits for yet another ‘liberation’ from the condemned mappings and trappings of history’s diabolical method in the madness.

Brave and victorious Lawrence, decorated and glorified, anti-war, who hated bloodshed, sacrificed his youth in the desert, becoming himself the soul of an Arab; truly, finally, he lost the war. He was defeated by his own masters. And, if he wanted a united Arabia, his western masters did not allow him to even taste his dream, not even in insomnia. That he almost became half-mad, only proved his final synthesis with a mad landscape, and the ravages of war and human suffering, which continues till this day, ceaseless.

From one carnage to another, how do we assemble the fragments of the human tragedy which stalks our contemporary consciousness, like Allepo becoming a melted art installation of a thousand terrible graveyards under a thousand terrible suns? The media in India is not interested, surely not the shouting matches on prime time TV; how many reporters are out there covering Palestine, or Syria, or Fallujah, even the thousands of ship-wrecked refugees on land and sea?

In our own country, we watch a film called Parzania yet again and we remember a heart-broken Parsi mother who searched for her little son for seven years and did not even find his body. The 69 massacred in Gulberg Society in Ahmedabad, on February 28, 2002, where she lived with her happy family along with other happy families -- will there ever be a ‘closure’ to their suffering? Will the masterminds in the police and in the government, who openly allowed the carnage as a public spectacle, ever be brought to justice?

Zakia Jaffery saw it all with her own eyes. You look at her mother’s face, and she becomes your own mother, like the mother in Parzania. You look at the faces of the killers and their masters, and you know so well that there is not one iota of repentance or pain. As if, genocide is so normal. 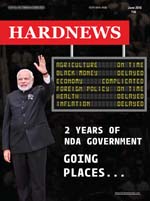