From the very early days of the digital startup story valuations have always been dodgy. Companies like Flipkart received valuations that defied their ballooning losses. The assumption behind these valuations was that the businesses of these companies would grow exponentially as more and more people shifted to the Internet to shop and do business. This made ample sense as this change could be tested. A mobile user could download an app and pretty much browse everything in the virtual marketplace, place an order and within no time get delivery. Life seemed to get so simple, efficient and orderly. There was no real need to go to the market for groceries, vegetables and furniture, or to buy mobile phones. For people living in big cities this constituted a big relief, as they did not have to travel to the market or look for a parking space in congested areas.

Driven by this simple but compelling logic – that people like to shop and do business from the comfort of their homes – more and more young startups began to sprout. Fuelled by funds from high net individuals (HNI), investment bankers and large companies that did not want to miss this opportunity to diversify and ride the gravy train, many  entrepreneurs began to play out their dreams to be part of an economy where there was the freedom to earn without being encumbered by government regulation. For these entrepreneurs the challenge was the competition, not the inexorable growth of the market. The new NDA government that rose to power in 2014 by promising jobs realised that only the digital economy had the potential to create employment.

Expectedly, PM Narendra Modi announced programmes like Digital India and Startup India to create an ecosystem in which entrepreneurs could incubate their ventures. Banks and financial institutions were encouraged to provide funding to the deserving, and a corpus was even created to support them. Aggressive advertising and reporting about the transformative character of the digital economy did not just raise hopes, but also diverted funds to this sector. It seems the mirror is cracking. The valuation-based economy is being hobbled by what is called ground reality. Despite the fact that the economy is reportedly growing at 7.5 percent, most sectors of the economy are still in pretty bad shape. Before the present good monsoon, the country experienced four dry seasons that shrivelled the rural economy. This led to a collapse of demand in society.

The real estate sector was the worst hit. In big cities there were no takers for big housing projects. Some figures suggested that 65–70 percent of new apartments remained unsold in cities like Delhi and Gurgaon. When real estate locks up so much of fluidity in the market, other sectors suffer. Banks struggling with toxic assets or non-performing assets (NPAs) do not have the stomach to support startups or experiment with their funds even when the government wants them to! In a certain way the diminishing demand hurt this sector in a manner that had not been anticipated. Besides, there are other reasons: for example, the inability of companies like MakeMyTrip and others to deal with the tax authorities. Due to immaturity or poor interpretation of the law on the part of entrepreneurs, these digital companies seem to be on wrong side of the taxmen.

Last but not the least, the digital economy found to its chagrin that traditional brick-and-mortar companies were not going to go away without a fight in a democracy where every vote counts. So digital taxi hailers like Uber and Ola have been faced with resistance from old taxi services. Similarly, online retail has been slapped with taxes by state governments in order to make neighbourhood shops viable. The recent passing of the Goods and Services Tax (GST) Bill in the Rajya Sabha is unlikely to clear the air any time soon, and no one is quite sure how exactly it will impact this sector. Though digital is here to stay, it cannot have secular growth when the rest of the economy is breathing asphyxiating.

Read more stories by Where does Digital go from here? 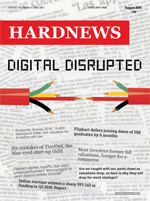