That is the unhappy progression of the Bihar Liquor Policy, with the new provisions being sought to be added by the zealous Mahagathbandhan
Shibu Kumar Tripathi Delhi

As the liquor from broken bottles seeped into the concrete of the roads of Bihar and alcoholics shifted their gaze to the neighbouring states of Uttar Pradesh, West Bengal and Jharkhand, the Bihar Excise (Amendment) Act, 2016, a.k.a. the Bihar Liquor Policy, ended up being declared a success by all, save one person. Nitish Kumar, the five-time chief minister of Bihar, has swiftly manoeuvred a new move to sweep away both alcohol and its consumers. Being termed draconian by critics, the new provisions of the Bihar Liquor Policy seem to be intended to punish people for even smelling liquor in what was once the Magadh Empire.

The Bihar Assembly passed the new provisions of the Bihar Excise (Amendment) Act, 2016, in the last week of July. The new rules, which are harsher than before, hold the entire family criminally liable for a non-bailable offence if any family member—husband, wife, adult children—is found in possession of alcohol. The Bill presumes that the family members will have prior information about the stock of illegal alcohol in the house and prescribes rigorous imprisonment of 10 years. Meanwhile, if tenants are found consuming or storing alcohol in a building, the owner of the building will also face legal proceedings.

These provisions give full powers to the police to conduct arrests at a scene where utensils are found with a mix of sugar or jaggery and grapes, assuming it to be a brewing site for country liquor. The District Collector has been vested with the power to impose a collective fine on a group or even an entire village if they are frequent offenders. The administration has been bestowed with the power to confiscate the movable and immovable property of such offenders and auction it. Previously, the administration had the power to seize property only in cases of corruption or financial offences.

The Bihar Assembly passed the new provisions of the Bihar Excise (Amendment) Act, 2016, in the last week of July. The new rules, which are harsher than before, hold the entire family criminally liable for a non-bailable offence if any family member—husband, wife, adult children—is found in possession of alcohol

The BJP termed it a black law in the making, describing it as ‘Talibani’ in nature as it sets out to curb some of the basic fundamental rights of citizens. The BJP opposed the inclusion of these provisions when the Act was tabled in the Assembly, but the Mahagathbandhan got it cleared with ease in the House. The Leader of the Opposition, Nand Kishore Yadav, said, “We are in support of total prohibition but these new provisions mark a black day in Bihar’s history and people are keenly observing this government now. It is unfair to punish an entire family for the offences of one.”  However, BJP officials have declined to challenge the provisions in the High Court.

The coalition government of the Janata Dal (United), the Rashtriya Janata Dal (RJD) and the Congress has supported the additions to the law. Earlier, there were reports of conflicts between the RJD’s Lalu Prasad Yadav and CM Nitish Kumar over the extent of the provisions, but the latter received unanimous support in the Assembly. RJD officials refrained from commenting on the episode and said that the decision to introduce these rules was taken by the Mahagathbandhan and only National President Lalu Yadav could speak on it. 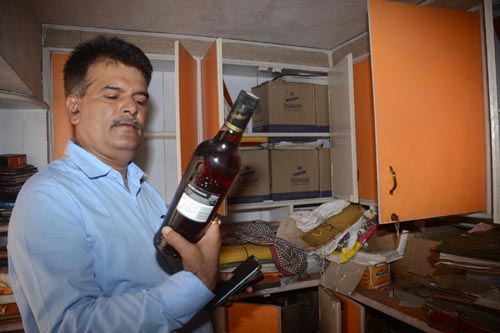 In an opinion piece written for NDTV.com, Nitish Kumar tried to explain the rationale. Justifying his move, he said, “The Bill sets out to protect the women of the household from a male adult who wishes to pin the blame away from him to any other member of the family. Those criticizing this may care to advise as to the person to be arrested if, in a house, bottles of liquor are recovered, and no member of the family owns up to it. They should also enlighten us who should be arrested in a case if the house is in the name of the wife.”

On the legal front, Nitish’s protective effort is regarded as a direct assault on the fundamental rights of the individual. The power given to the police and district collector to search a house on mere suspicion that liquor might be stored in it is a violation of the right to privacy, argue constitutional experts. The provisions also violate the right to life, as the entire family will face consequences on account of one person. Additional Solicitor General (ASG) of Bihar SD Sanjay opined that the law had initially been enacted with a positive objective, but has become repressive with time. He said, “The new provisions infringe on the right to privacy as they give immense power to the police and district administration to search houses on the basis of suspicion. The harshness of these provisions is to such an extent that they breach the Right to Life vested by the Indian constitution. I do not oppose the original law as it set out to prohibit alcohol from the state, which is a laudable initiative, but these new provisions are worrisome.”

The law has left army cantonments out of bounds; the army can supply liquor to its men in uniform only. However, if an officer is found consuming or moving alcohol outside the precincts of the cantonment he  can be detained by the police. The ASG said that “a number of such armymen have already been detained by the police since April 1.”

Having been hailed as a pioneer of prohibition in the state, Nitish faced opposition and media rage after his own party’s MLA was found consuming liquor and hurling abuses at the CM in an MMS that went viral. Lallan Ram, MLA from Kutumba constituency in Aurangabad district, was purportedly seen consuming liquor in the video and was quoted as saying “no one will follow him [Nitish]”; he was arrested and a case lodged against him by the State Excise Department for violation of the prohibition law.

There was a major uproar against the government when 14 people died after consuming illicit liquor in Gopalganj district in August. The post-mortems confirmed the consumption of country liquor as the cause of death. The district administration formed seven teams to look into the matter and the people complained of regular manufacture of spurious liquor in the area, a phenomenon to which the police paid no heed. Following the tragedy, 25 police officials were suspended for dereliction of duty after over 1,000 litres of country liquor were recovered from underground storage in the district.

The police has conducted multiple raids throughout the state and arrested thousands for storing and consuming country or foreign liquor. The ADG, Law & Order, Alok Raj, said, “We have been regularly conducting raids throughout the state, and with time the violations are being curbed.” He added, however, that “the chunk of liquor is being recovered from bordering regions of Bihar following prohibition.”

Bihar has raised a demand for recognition as a special state from the Centre on multiple occasions. The state is now facing heavy annual revenue loss, courtesy of prohibition. Official figures suggest a projected annual loss of over Rs 3,300 crore from the state’s treasury. Meanwhile, the recommendations of the Seventh Pay Commission have inflicted an additional burden of Rs 3,000 crore, which is going to make things even more challenging for the state’s finance department. Bihar is already facing problems in paying salaries to government teachers; officials of the department said that teachers have not been paid for the past six months while the amount payable to farmers for the kharif season yield is also pending.

Bihar has seen two major tax increments since it went dry in April this year. In the first week of August the state cabinet gave its nod to withdrawal of the 2 percent concession on diesel, which led to an additional 2 percent VAT on diesel, hiking prices and irking consumers. 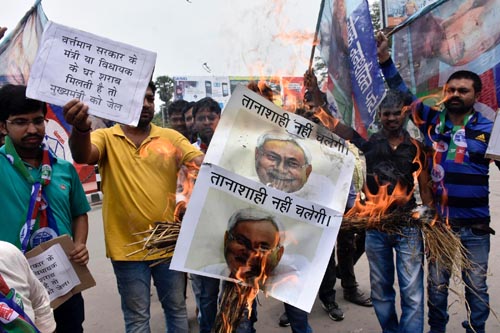 Officials in the finance department justified the move and said that it will add over Rs 22-25 crore to the state’s treasury every month. BJP State President Mangal Pandey said, “This is just another way of exploiting people’s pockets, which are already getting shorter now.” He added, “The lead-up to this situation has been the decision of prohibition, which in a way is good and we support it completely but on the other hand it has surely caused revenue burdens for the state.”

Tussle between state and police department

While the finance department suffers, the government now seems to be at loggerheads with the police department as well. Eleven SHOs were suspended on grounds that they failed to check and curb the manufacture of liquor in the areas under their jurisdiction. The suspension triggered a state-wide protest from the police department with the Bihar Police Association (BPA) issuing an ultimatum to the Police Headquarters to withdraw the suspensions or risk a major agitation. The tussle ended with the chief minister’s stern message, “Leave the post or even resign from the service but the law will remain to enforce the liquor ban.”

Bihar has seen two major tax increments since it went dry in April this year. In the first week of August the state cabinet gave its nod to withdrawal of the 2 percent concession on diesel, which led to an additional 2 percent VAT on diesel, hiking prices and irking consumers

The National RJD President and former Chief Minister, Lalu Prasad Yadav, expressed support for Nitish on the matter. He said, “New people will be recruited. Liquor has been banned, it is their duty, they should look after it. Arrest them and take them into custody. Why will anyone drink this poison?”

The parent legislation was passed in the Assembly on April 1, which initially banned country liquor. It was then upgraded to an umbrella ban, bringing foreign liquor within its ambit as well, making Bihar the fourth Indian state to declare itself dry. The decision to introduce prohibition came as part of Nitish’s 2015 electoral promises, which included an assurance to the women of Bihar on complete banning of liquor. Prohibition has made women voters happy but the new provisions have started creating new challenges at all levels for the government. The amendment awaits Governor Ram Nath Kovind’s formal assent to become law. The Governor is still in consultations with his legal team over the new rules.

That is the unhappy progression of the Bihar Liquor Policy, with the new provisions being sought to be added by the zealous Mahagathbandhan
Shibu Kumar Tripathi Delhi