The Azadi Kooch that culminated in Una on August 15 was an event of immense proportions, but, in an act of omission characteristic of the Indian media, got no mileage from our news channels

Celebrity tweets often drive news agenda. Brand ambassador for Gujarat Amitabh Bachchan may not have found the gathering of thousands in the little known village of Una contributing very much to the image of the state, but despite his indifference, news about the mass confluence of August 15 went ricocheting across social media, stirring up deep resonances in various corners where the nationalist freedom rituals of that day were perceived to lack a substantive core.

Una was the location of an infamous act of vigilantism on July 11, when four Dalit workers found skinning a dead cow were set upon by self-styled guardians of bovine honour, thrashed brutally and paraded in ignominy. The event drew a flurry of agitated reporting in the country’s media, where it was seen as part of a pattern of crimes committed in the name of the holy cow, now enshrined as a cultural symbol that the entire nation is compelled to genuflect before.

The bovine dignity movement has identified two potential recalcitrants that may require the stern administration of the new discipline. The Dalit is seen to be averse to the veneration for the bovine species, since it also comes with an assertion of older privileges and hierarchies he or she is committed to overturning. And the Muslim is believed to have ingrained dietary habits and an involvement in trades that threaten bovine longevity. 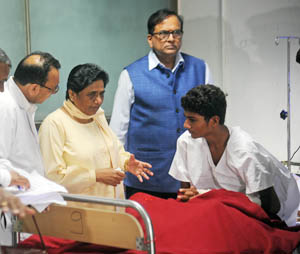 There is a common thread that connects the Una atrocity with the brutal lynching of Mohammad Akhlaque in Dadri in western Uttar Pradesh on the suspicion of storing and consuming beef. The murky aftermath of the lynching brought about the absurd probability that the family of the dead man may face prosecution, after a forensic examination of the meat recovered in the vicinity of his home first inferred that it was mutton and then beef.

Institutions of the law and civic life are tottering and may well collapse under the pressure of vigilantism. Promises of equal treatment under the law, shaky at the best of times, are at risk of being explicitly compromised, even abandoned in the case of citizens who decline to partake of the hegemonic identity that these revived nationalist doctrines impose.

That was the unintended sub-plot of the remarks rendered by Prime Minister Narendra Modi to a conclave of the party’s most senior leaders on August 25. ‘Nationalist’ forces, he said, had gravitated towards the Bharatiya Janata Party and found firm moorings within its ambience. There was a need now to consolidate the party’s appeal to Dalit and backward class populations. By implication, the Dalit and backward classes were not yet imbued with a sufficiency of the nationalist spirit. As for the religious minorities, they did not, by any account, even earn a mention. Perhaps they are unlikely ever to figure in BJP calculations, except as a possible constituency that could be captured through the politics of fear.

The Azadi Kooch or freedom march from Ahmedabad to Una took 10 days and gathered momentum as it neared its destination. Teams joined from other states prior to the culmination on August 15. Its progress was impeded at numerous points by hostile gatherings of the BJP and its allies. Participants were threatened and their vehicles attacked and, on occasion, stopped. But the climactic event was a rousing affair, deliberately kept free of the usual cast of political players.

With a significant number of Assembly elections scheduled for 2017, the Dalit mobilisation is a clear effort to create an alternative to the BJP’s majoritarian agenda. Gujarat itself is not a state with a significant numerical strength of Dalits, but in a context where the BJP’s core constituencies among the Patidars are restive, the Dalit mobilisation could have a substantial political impact. Punjab and Uttar Pradesh, both vital to keeping the BJP’s authority intact and Modi retaining his aura within, have significant Dalit populations which could exert decisive influence.

If these are the potential implications of the new Dalit mobilisation, the virtual blanking out of the Azadi Kooch from mainstream media reporting should occasion some surprise. The reason partly lies in the arena where it was staged. Gujarat has been hostile terrain for critical reporting for quite a while and despite the recent Patidar disgruntlement, there are powerful forces working against a negative portrayal of the government of the day, still strongly associated with Modi and his principal political lieutenant, BJP President Amit Shah.

There is a rich vein of sociological inquiry originating in the famous characterisation of the nation as an ‘imagined community’, which looks at how media messages construct a world of ideological affinities that its consumers live in. A justly famous theory going back three decades holds that ‘print capitalism’, with its normalising tendency and its creation of a mass vocabulary, was very crucial to the constitution of a sense of national solidarity. From a variety of mutually unintelligible modes of thought and speech, nationalism created a unified language of communication and other bonds that were stable, durable and could be the foundation of a number of individual acts of commitment to the wider network, called ‘patriotism’. As the primary mode of interaction between individuals, language was where this manufacture of unity and mutual solidarity really began. 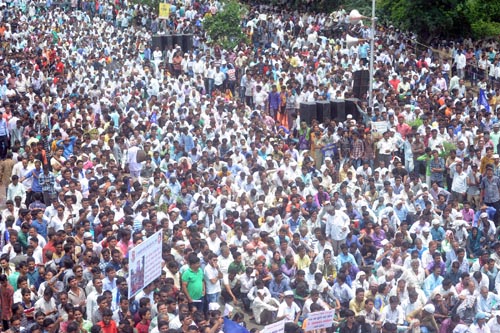 The spread of a standardised vernacular for use in daily social intercourse – even by communities otherwise isolated from one another – contributed to the growth of a very basic nationalist consciousness. With the burgeoning ambitions of a capitalist class intent on turning every opportunity into profit, the media in turn spread into unexplored geographical nooks, inviting far-flung communities to participate in what was beginning to be defined as the spirit of the nation.

These insights from recent research need to be updated with an assessment of the influence wielded by the broadcast media in strengthening bonds of identity and nationhood. Few would doubt that the burgeoning electronic media has contributed in the last two decades of the 20th century and well after towards the waning of traditional allegiances and the creation of new bonds, different but still as imperfect as the old.

In his 1994 study on Communications and Power: Propaganda and the Press in the Indian Nationalist Struggle, Milton Israel pointed out that “in significant measure, the ideal of an all-India nation state that emerged out of the Indian nationalist struggle was imagined in English print”. This was not really a unique situation since in most colonies, the early nationalist stirrings were articulated in the language of the imperial power in a borrowed vocabulary of rights. Pragmatic considerations also played a role, since English was the only language that “reached beyond regional borders – especially those that separated the north and the south”.

English language media continues to play a role in the imagination of the nation as a burgeoning economy with ambitions of emerging as a heavy hitter in world affairs. The confluence of the globalisation dynamic articulated in the English language and the various regional discourses which bring in the many local flavours of India frames the overall political dialogue.

Linguistic idioms and vocabularies as they developed through the years of modernisation privileged a particular social strata’s perceptions and discourse. This created schisms along two axes – two modes of exclusion – of the principal religious minority and of those disadvantaged within the traditional Indian caste system. Early journalism reflected these schisms and in the case of Marathi at least, they have been well documented in the frequent collisions between viewpoints exemplified by Bal Gangadhar Tilak, Gopal Ganesh Agarkar and Jyotirao Phule. These have all been papered over in contemporary historical accounts, since all three are now regarded as icons within the nationalist pantheon. But the schisms from that time remain and influence the tone of the contemporary discourse.

A survey prompted by the 2006 decision to expand the scope of affirmative action for backward classes found that in a sample of 315 journalists in the national capital with the authority to determine media agendas, not one belonged to either a Scheduled Caste or Tribe. No fewer than 49 percent of the sample was drawn from the Brahminical strata. And if all caste-Hindu groups were to be considered in addition to the so-called dwija or twice-born, their share in the total was no less than 88 percent. 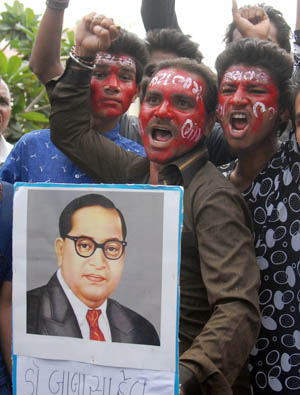 In 2000, Robin Jeffrey, a noted scholar on the Indian media, wrote, following the 19th century French ideologue, Ernest Renan, that if “nationalism is a daily referendum” then purchasing a newspaper constitutes a vote of affirmation. Clearly, also inherent in this daily ritual are multiple layers of meaning of who constitutes the nation and who are its ‘minorities’. But from his observation of Dalit representation in the newsroom through the 1990s, he was led to less happy conclusions. There was some evidence, he observed, that the missing Dalit had begun making an appearance in the newsroom. But they remained too vulnerable to proclaim their “Dalitness”. The handful that there was needed to “pass” and to “write the sorts of stories their superiors expect(ed)”. This meant that readers would continue to receive newspapers “which (were) the outcome of the Dalits not being there and which reinforce ideologically the material weaknesses from which Dalits suffer”. Newspapers, Jeffrey observed, would “tell readers that Dalits are poor, naïve, ignorant; victims, and sometimes perpetrators, of violence; in short, people who almost never travel, eat, or get married”.

The well-known Hindi news anchor, Ravish Kumar, returned to this theme in 2015. Despite the growing presence of the Dalit in social and political life, he found there were none in the newsroom. It was the elephant in the room that nobody wanted to talk about. If merit and chance were the determinants, then “surely some Dalits should also have made it” into the newsrooms.

Kumar found, when he set out to create a documentary on the observances of B.R. Ambedkar’s birth anniversary, that there was some active hostility and questioning of his motives. He found that even before he began speaking to his respondents on the programme, he would have to deal with hostile questions about why the event was neglected by the news channels. These were all, in Kumar’s view, well-deserved reproaches: “By ignoring certain questions and issues, the media helps create such restlessness – ask any Dalit middle-class person and the anger is immediately palpable. The middle class cultural hegemony of the media has meant that various fasts such as Karva Chauth, Lohri and even Dhan Laxmi are written and talked about, but there is a deafening silence around Ambedkar Jayanti, Valmiki Jayanti or Ravidas Jayanti.”

The issue was not merely of the media getting its priorities wrong, but of a fundamental disconnect with society and politics. Long after exclusions were legislated out of the social realm, they remain a persistent feature of the Indian media universe.

The Azadi Kooch that culminated in Una on August 15 was an event of immense proportions, but, in an act of omission characteristic of the Indian media, got no mileage from our news channels
Sukumar Muralidharan Delhi

Read more stories by The case of the missing Dalit