AAP continues to demand a repeal of Demonetisation

The Aam Aadmi Party (AAP) is fighting a battle on two fronts: it is protesting against demonetisation on one hand and simultaneously attempting to divert public attention towards the alleged exposé of Prime Minister Narendra Modi made by Chief Minister Arvind Kejriwal. AAP has been rallying against the denomination drive initiated by the National Democratic Alliance ruled centre for a while now. Chief Minister Arvind Kejriwal and his West Bengal counterpart Mamta Banerjee had earlier demanded a rollback of demonetisation, while coming together at the Azadpur Mandi rally last week. He had followed this up with a speech uploaded on youtube against the demerits of demonetisation. The passionately argued rant quickly became a viral sensation garnering close to 5 million views on social media. Prior to this Kejriwal had asked pointed questions about how BJP leader Sanjay Kamboj was in possession of a 2000 rupee note much before the demonetisation announcement was made.

Continuing their so-called crusade in support of the aam aadmi Deputy Chief Minister Manish Sisodia was detained yesterday along with his cabinet ministers Kapil Mishra, Satyendra Jain, Delhi AAP convenor Dilip Pandey and 50 other party workers. The minister was detained while leading a Parliament gherao march from Jantar Mantar. After enjoying some samosas, biscuits and tea while at the station Sisodia and his ministers were later released. The hospitality extended by the police was perhaps a reward for their exertions in the morning.

The gherao was initiated by the Aam Aadmi Party to protest against the government's decision to demonetise currency notes of 500 and 1000 rupees. Calling it a chaotic decision the Deputy CM said, “Modi ji has been saying that this is being done to end corruption and black money, but black money is still widely prevalent. Black money hoarders are still in business, terrorists have already managed to get their hands on the new Rs 2000 notes, now black money is being stacked in higher denominations of Rs 2000. People are not sleeping peacefully as Modi ji is falsely claiming, they are dying instead.” Sisodia's claim is a factually correct one. Ever since the announcement was made 55 people have lost their lives. While most deaths are of the elderly waiting in long bank queues, there are quite a few suicides, especially of housewives. It is also possible that a large number of deaths may have gone unreported. 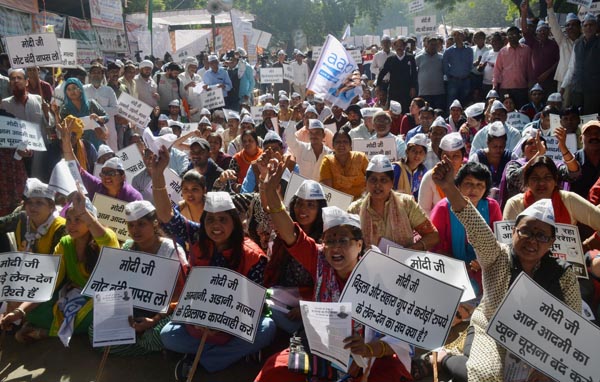 Earlier Sisodia had addressed party workers, volunteers and lawmakers at Jantar Mantar saying that “Narendra Modi has been shedding crocodile tears while people are crying tears of anguish, meanwhile new notes have come up in the black market within 10 days.” AAP leaders said that alleged black money hoarders like Sahara, Birla are profiting. If the narrative of the party is to be believed these are people who have bribed the government and got a tip-off before the move was made. They went on to say that the mood of the country is changing and when the time comes it will give its verdict against Modi. Party MLA Somnath Bharti pointed out the inefficiency of Congress in dealing with the revelations made by the Income Tax Department back in 2013. He said, “Congress should tell what did it do in 2013 following the investigation by the IT department, Congress and BJP are hand in glove where BJP forgets the indiscretion of Vadra and Congress forgives Modi.”

Several parties have responded to the clarion call of AAP. Trinamool Congress (TMC) organised a protest at Jantar Mantar which was attended by politicians like Sharad Yadav and Jaya Bachchan. Opposition party members also gathered at the Gandhi statue in Parliament to vociferously protest against the refusal of Prime Minister Narendra Modi to attend the Rajya Sabha. This is a precursor to a nationwide ‘Aakrosh Diwas’ that opposition parties are planning to hold on November 28. It seems that opposition parties are set to exploit this opportunity to the hilt and build much needed political capital among the masses.