The demonetisation drive has brought together unlikely political allies

Nisar Ahmad who hails from Pulwama district of Kashmir is in Delhi for the last four months for the eye treatment of his 10-year-old son Mahran. On Thursday, Mahran accompanied his father to Azadpur Mandi to hear Arvind Kejriwal address the growing unrest among traders and common people over the demonetisation initiated by the centre. Eager to see West Bengal Chief Minister Mamta Banejee and get a glimpse of Kejriwal, Mahran asked his father to pick him up and show him the stage where they were speaking. 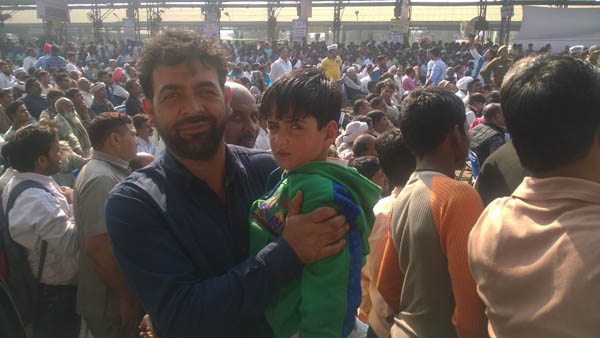 Nisar expressed his anguish over the demonetisation, “I have Rs 2,000 with me but they are of no value, as they have been declared illegal by our government. I don't know where to go as I am from Kashmir. They are not accepting Rs 1000 note in the hospital, by doing this Modi ji has done a grave injustice to us. My son and I have been starving for last two days, wherever we go we are asked to exchange Rs 1000 for Rs 800 and Rs 500 note for Rs 400.”

Like Nisar, thousands had gathered at the Azadpur Mandi to be part of the rally organised by the Aam Aadmi Party (AAP) which received support from West Bengal CM Mamata Banerjee. Speaking at the rally both Kejriwal and his Bengali counterpart gave a three-day ultimatum to the centre to roll back the decision of demonetisation or face a spur of agitations and unrest. AAP announced a workers welfare fund for the traders who are facing a crunch in their business due to demonetisation.

Banerjee addressing the rally said that the decision to terminate larger denominations of Rs 1000 and Rs 500 has pushed the country backwards by at least 100 years. Affirming her ties with Delhi CM against the centre’s plans she added, “It is not a fight of our egos, but a fight for the country, and I am with Arvind on this.” On her twitter handle she announced that the government should allow the usage of 500 and 1000 rupee notes till December 30.

Referring to the recent restructuring of loans by the SBI which included a write-off of the debts of Vijay Mallya’s Kingfisher worth over Rs 1,200 crore, Kejriwal claimed, “People will deposit Rs 10 lakh crore by standing in long queues of the banks and Modiji will waive off loans amounting to Rs 8 lakh crore given to his corporate friends.” Hurling accusations of corruption against Prime Minister Narendra Modi during his term as the Chief Minister of Gujarat he added, “I was shocked to read through the reports of Income Tax Department about the raid on Aditya Birla’s office in which they recovered documents pertaining to paying up of over Rs 25 crore to Modiji, while documents recovered from another raid at Sahara’s office indicated a sum of Rs 40 crore paid to him.” 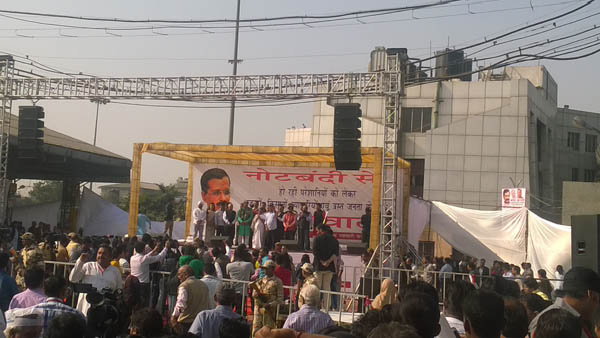 Following the rally both Mamta Banerjee and Arvind Kejriwal, headed to the Reserve Bank of India (RBI) office where they met with the officials and enquired about the status of the current flow of the currency denominations in the bank. Kejriwal tweeted “How much currency needed? How much printed? What is capacity? How many more days will it take? Myself n Mamtadi at RBI to get this info.”

Mamta Banerjee and Arvind Kejriwal, two unlikely allies, have come together at a time when the BJP-led National Democratic Alliance is coming under fire from a united opposition, which has called the decision to demonetise anti-poor and unplanned. While the alliance between the two looks strong at the moment, differences had appeared on November 15. When, despite an invitation to join the march upto Rashtrapati Bhawan, Kejriwal did not join the protest march to Rashtrapati Bhawan led by the West Bengal CM against demonetization. Bhagwant Maan was the lone AAP MP who came out to and joined the march. While, mixed reactions to the decision to demonetise have also appeared amongst political parties with Nitish Kumar lauding the government for the move; however, the only people who are suffering are people like Nisar, and the thousands others like him who find it difficult to move from one day to the next.