Changing the Demonetisation Narrative like a Chameleon changes Colours

No matter what the spin around the note ban, it is clear the move was a politically expedient decision rather than a principled policy move

The black swan theory or theory of black swan events is a metaphor that describes an event that comes as a surprise, has a major effect, and is often inappropriately rationalised after the fact with the benefit of hindsight. The term is based on an ancient saying which presumed black swans did not exist, but the saying was rewritten after black swans were discovered in the wild. After more than 50 harrowing days of demonetisation that has seen crores of Indians struggling to access their own money from banks, questions remain as to why the government chose to take a “black swan” decision. The outcome of this decision is that businesses are floundering, breadwinners in impoverished families are losing jobs and there is an all-encompassing unwelcome intrusion of the Income Tax (IT) department in people’s lives. As independent economists and even the Reserve Bank of India (RBI) seemed unsure about the implications of exterminating high-denomination currency notes that constituted a whopping 86 percent of the money in circulation, the decision to demonetise was primarily a political one. The political expediency of the move is the sole reason that Prime Minister Narendra Modi has become like a chameleon changing colours, trying to constantly tailor the narrative around demonetisation to suit the mood of the public.

From fighting black money to eliminating terror financing to stopping fake currency, to defanging the BJP’s political opponents, especially the Congress, by rendering their war chests depleted before the crucial elections in UP and Punjab and now, finally, to digitising the economy – the narrative on why the high-value currency was demonetised has changed faster than Usain Bolt runs. Now, there are rumours that digitisation was prompted by USAID to help some digital companies gain control over the Indian economy. More about that later.

Gullible minds have never wondered aloud why there is so much anxiety and hyperbole over such a minuscule presence of counterfeit currency in the economy. According to an Indian Statistical Institute study, only Rs.70 crore worth of fake currency enters the country’s monetary system. At any given time, the study reveals, Rs. 400 crore worth of counterfeit notes is floating in the market.

The fact that 97 percent of the currency notes have been deposited with the RBI clearly indicates that the government had overestimated the amount of black money in the form of currency notes. What about fake currency or FICN, as it is called? Here again, it was less than what was being projected. Most government estimates suggest it could be about Rs.400 crore out of the RS.15 lakh crore worth of currency in circulation. It is a minuscule percentage, but so much anecdotal evidence has been disseminated incessantly by social media and WhatsApp that it seemed like a threat to the nation’s existence. The issue of counterfeit currency serves tactical interests too for our country as it helps in building a case against Pakistan as a rogue state that not just foments terror, but also funds it through fake Indian currency that its security presses roll out all the time. A few days ago some newspapers even said that after the new currency with enhanced security features was introduced in India post-demonetisation it became difficult for Pakistan’s terror machinery to print them any longer, compelling them to shut these presses. There is no proof for such claims as they are attributed to unknown intelligence sources. Instead, such reports serve the interests of the security and intelligence establishment that needs them to appease the political leadership which in turn uses it to pep up the morale of the faithful who display an orgiastic joy at the successful diminution and tarring of the enemy. This is not a newfangled tactic. Whatever the Congress government had done in the past is being aggravated beyond acceptable limits – mostly through social media. Gullible minds have never wondered aloud why there is so much anxiety and hyperbole over such a minuscule presence of counterfeit currency in the economy. According to an Indian Statistical Institute study, only Rs.70 crore worth of fake currency enters the country’s monetary system. At any given time, the study reveals, Rs. 400 crore worth of counterfeit notes is floating in the market. What does fake currency do to the worth of the real authentic money? Practically nothing! Authentic money does not lose any value due to the presence of counterfeit notes in the system. What is also worth noting is that most counterfeit money is eventually netted by the banks. So, in some ways, it does not get circulated so extensively as to undermine people’s faith in genuine currency.

Counterfeiters make money like any other business outfit. They sell a product which costs X amount for X+Y amount. It’s another matter altogether that counterfeiters make a killing by selling clone currency at a significant markup. According to government estimates, those in the fake note printing business spend Rs. 39 to print a high-denomination note, which the government prints at Rs. 29. Earlier, counterfeiters used to sell fake Rs. 1,000 notes for Rs. 350 and earn a decent profit. By a rough estimate the counterfeiters, who allegedly include Pakistan’s Inter-Services Intelligence, used to make some Rs.400 crore profit from Rs. 1,000 crore worth of counterfeiting. It’s a good business whose economics is uniform the world over. At the same time countries do not demonetise their currency as the burden of this exercise on the economy and people is very heavy and painful. There are better ways to fight this menace.

The US Federal Reserve, despite the dollar being the preferred currency for counterfeiting, never seriously entertained the idea of scrapping high- or low-denomination cash. In turn, it resorted to use of technology to pull out fake notes. The net result is that barely 0.01 percent or around $60 million of dollars in circulation are considered to be fake. Just one $20 bill out of 10,000 such bills is dodgy. Counterfeiters of the dollar consider themselves artists and claim that about 12 people are needed to create one fake note. Even then the US government tries to deny them by introducing new features in high-denomination notes all the time. The last new 100-dollar bill that was introduced by the US took nearly 10 years to put together.

Quite evidently, fake currency was not really the issue – much though the government or the RBI may talk about it. 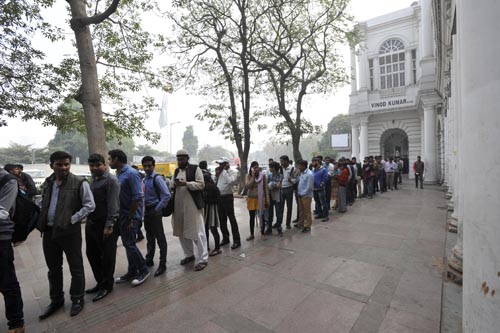 There have been some reports that USAID has been responsible for this brutal currency reform to make India cashless. There has been plenty of circumstantial evidence to show that the US government and its agencies were deeply engaged in empowering a cashless alliance that included many digital payment companies. Nandan Nilekani was quite prescient about what was expected in the coming months. In a foreword to a Credit Suisse report titled “The US$600 billion opportunity” he says that the “gale winds of disruption and innovation brought upon by technology, regulations and government action, will fundamentally alter the banking industry.” According to him biometric identification through Aadhaar which has reached a billion Indians along with the growing penetration of smartphones and Jan Dhan accounts provides what he calls the “whatsapp” moment for the Indian economy, where billions of banking transactions go cashless. Since demonetisation, e-wallet companies like Paytm are having billions of transactions and cash is no longer being used.

The elimination of cash is really hurting many industries which conduct all their business in hard currency. In a country where a 40 percent cash-based economy employs 80 percent of the population, this decision has left a veritable blood trail. Millions of people have lost their jobs. Many of them have retreated to their villages, hoping to return when the economy stabilises. But the date when cash returns to the banks along with the freedom to withdraw it is not coming any nearer.

The real reason behind demonetisation, besides all that has been stated above, still remains the disempowerment of political opponents before the crucial UP elections. Prime Minister Modi openly calls those who are resisting and criticising his move to ban big currency notes defenders of black money. In one stroke he has branded the opposition to demonetisation from Rahul Gandhi, Mamata Banerjee and the left parties “defending black money”.  The net outcome of his decision is that, at least in Uttar Pradesh the Samajwadi Party, the Bahujan Samaj Party and the Congress have not been able to hold a big rally since November 8. Only the BJP seems flush with funds, as evident from the big rally it organised in Lucknow recently. Questions were raised about the BJP’s easy access to poll funds when other parties were struggling to get money out of the banks. Questions are also being asked about how they will manage to mount a serious challenge to the BJP without much cash. Surely, much of the work that takes place during elections cannot be paid through cheques or Paytm.

From this standpoint it will be interesting to see whether demonetisation, which has brought about a feeling of schadenfreude amongst the people, will help the BJP annihilate the opposition in the states going to the polls or if the party will be stung by those who have been reduced to penury by this decision. 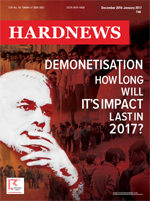