As Punjab goes to polls on February 4, a factor that is set to play a much bigger role this time around will be the increased participation of the Punjabi diaspora. While almost all political parties are dependent on contributions from the NRI community, the Aam Aadmi Party (AAP) seems to be miles ahead, at least in terms of coffers filled and getting on-ground assistance for its day to day campaigning. With the third contingent of over 150 such foreign volunteers from the United Kingdom landing in Amritsar last Tuesday their support base keeps on growing.

AAP which has a huge base in UK, US and Canada has successfully managed to rally hundreds of thousands of NRIs through a series of targeted events and campaigns. AAP launched its ambitious ‘Kick Nasha’ campaign as early as June 2016 to persuade youth living in the state to let go of drugs. It was later transformed into a global campaign under the leadership of Kumar Vishwas. Trying to connect with the people at an emotional level on one of the most rampant issues in Punjab, the campaign did wonders for the party. Initiated at almost a dozen overseas chapters in countries of USA, UK, Canada, Australia, New Zealand, Germany, Qatar, UAE and Singapore the messaging urged people to take up this socially relevant cause. Shail Gautam, organisational leader for the party’s Canada, New Zealand and Australia chapter said, “Punjabi people living outside India are extremely emotional and concerned about the uncontrolled menace of drug abuse in the state, though they live away from Punjab, they are still worried about the problems in their homeland which we witnessed during the ‘Kick Nasha’ campaign when people in large number participated in spreading the message.”

Following the success of the campaign, AAP upped the ante with the ‘Flame of Hope’ campaign which was initiated by its foreign chapters where people from the Sikh community travelled across the UK to mobilise people for the election. Numerous contingents have been coming to Punjab under the aegis of the Flame of Hope.

Surendra Mavi has come from Toronto, Canada to cast his vote and campaign for AAP. Mavi who had to leave Punjab after increasing cases of drug-related violence in the region is excited to be back. He said, “I did a bachelor’s degree in IT, and my worried parents sent me away due to growing drug usage among youth and scarcity of jobs in 2008, now that I am well off and settled in Canada I wanted to help my community in curbing the problems of rapid drug abuse.” 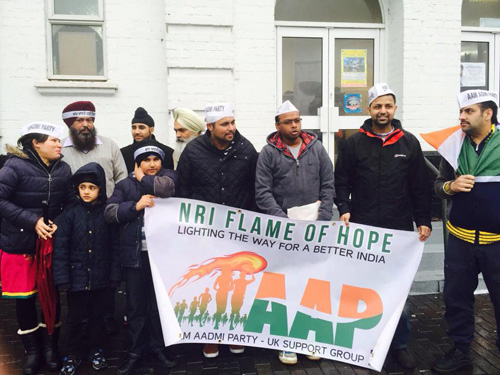 Impressed by AAP’s Delhi model which has been trying to put in place a corruption free government, a large section of the NRI community wants it to be replicated in Punjab. Frustrated by the ‘unkept promises’ of the previous governments, the NRI community now aspires for a government that creates avenues to provide better education, healthcare facilities and greater accessibility. Surendra further said, “The quality of educational institutions have declined over the years in the state where there is more focus on just completing the curriculum rather than imparting quality knowledge to the students.”

While education suffers, falling health standards is also a prime concern in the state. A survey in eight districts of Punjab by the Ministry of Health and Family Welfare and Centre for Research in Rural and Industrial Development (CRRID) in 2016 pointed acute shortcomings in healthcare facilities. The reports mentioned that there was shortage of doctors at several levels including specialists at the district hospitals, community health centres as well as medical officers at primary care centres. The district hospitals were running without essential specialists like paediatricians, and dermatologists in many districts. Healthcare has emerged as a major issue in elections across the globe. Lancet, a leading medical journal in its recent editorial criticised India’s continuous undermining of health issues and clinical research. The editorial said, “AAP has given health in India a political voice. On Jan 4, the government announced state election dates for 2017, beginning with Goa and Punjab on Feb 4. The state campaigns offer an opportunity for health officials in India to lead change. Given the popular uptick of universal health coverage reforms elsewhere in Asia, the Feb 4 elections may be a tipping point for health in India.”

Many believe that AAP might have a political edge in the elections due to its avowed commitment to bring in fair and transparent governance. The government machinery which is inaccessible to the people in the state is mired in allegations of corruptions that has distanced voters from their traditional leaders.

Mehtab Singh Khalon who has returned from the US on a sabbatical said, “We have seen the rule of both Captain Amarinder Singh and now Badal. This shift in support has been building up for the past ten years even when we had no option other than these traditional parties. Now that AAP is in the game we are ready to take our chances with a new establishment.”

AAP received extensive support among Indian nationals in foreign lands in its debut during the 2013 Delhi elections. ‘Adopt a constituency,’ a successfully run campaign called for such foreign nationals of indian origin —desperate for a change— to support the party in its crusade against corruption. Acknowledging the involvement and assistance of NRIs Shail Gautam said, “We received huge support from them in 2013 Delhi elections where they helped our candidates in most of the constituencies through funding or campaigning through phone calls. There were at least 45 such odd seats where we received assistance, all they wanted from us was to give a clean candidate, which we ensured.” 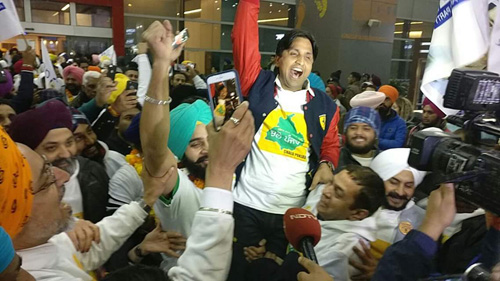 The involvement of NRIs in Punjab elections has been a constant affair: they sided with BJP in the 2014 Parliamentary elections. The e-ballot option provided to NRIs in 2014 for voting without even coming to India gave political parties opportunity to tap into a massive vote base beyond Indian shores. These parties then deployed a large chunk of manpower and capital in promoting their manifestos outside India with BJP launching its cell by the name of  Overseas Friends of BJP. During the Parliamentary elections numerous campaigns were replicated in UK and North America including the immensely popular ‘Chai Pe Charcha’ by the BJP while AAP tried its hand on Obama’s ‘yes we can’ slogan, replacing it with ‘together, we can.’

Congress is also working in tandem with NRIs in its campaign process but with very little success. Around 150 volunteers had earlier met Congress VP Rahul Gandhi before heading to Punjab. Congress in the past year has had a tough time communicating with the Punjabi community settled in US and Canada. The falling faith in the current Badal government is also evident among the Sikh community which boycotted the SAD sponsored World Kabaddi Cup protesting against the failure of the government in acting upon numerous cases of desecration of the holy Guru Granth Sahib, unchecked drug abuse among the youth and the growing crime in the state.

The Punjabi diaspora stands at over 2 million with more than 80 percent settled in Europe and Canada. The political turmoil in 1980s made many flee their home state and strive for better opportunities on foreign soil. Emerging as one of the most prosperous communities across the globe-both financially and politically-Punjabis now wish to come back and catalyse the change in their homeland. The February 4 elections might just be the epiphany that they were waiting for.