Reporting in a post-truth world

Ever since Narendra Modi came to power in 2014, those aligned with his ideology have been openly derisive of journalists they say oppose the BJP. All kinds of invectives have been hurled at journalists, including the coinage of “presstitutes”. Journalists’ credibility was damaged methodically by alleging lack of objectivity in their writing. This has been done by first pointing out to the writer that they had not come to a similar conclusion when, for instance, an indiscretion had been committed by a Congress member: What about X Congress leader saying the same thing, but not eliciting a similar response from you? This demand for fairness and balance by resorting to what is being called “whataboutry” has put the professional media on the defensive. The gameplan is to sow the seed of doubt in a journalist’s mind about sources and facts.

Ruling party supporters have been quick to condemn as “fake news” everything that is contrary to their idea of reality. By showing up the credibility of journalists’ sources as “biased” or “fake” they have tried to prove to reporters that the days of access-based journalism are over. And, to accord harsh meaning to this assertion, journalists have been denied entry to the Prime Minister’s Office (PMO). Other members of government are discouraged to interact with journalists. This denial of access for journalists is held up as a triumph for Modi’s PMO, with suggestions that the media misuses it for influence peddling and corruption.

They point to the infamous Niira Radia case in which some journalists were caught on tape talking with the head of a PR company about politics, cabinet formation and financial deals. These conversations were also heard by members of the lay public, many with little understanding of the business of news gathering and the hard work and patience needed to build trust with people in government. Some conversations may suggest moral transgression, if viewed out of context, but the case was used to tar Indian journalism and past reportage – including of events in Gujarat. This aggressive campaign, unleashed on social and traditional platforms, made news outlets go on the back foot.

Most media owners live off government largesse in the form of advertising, credit lines and, in some cases, support in other businesses. Due to its dodgy funding, the Indian media becomes an easy target for those who resent its influence in society. Expectedly, when a government hostile to the idea of a liberal media comes to power, media proprietors who are either over-leveraged or cash-strapped are the first to crawl before it. It happened during the Emergency, when it was imposed by Indira Gandhi to prevent the takeover of the country by fascists. This time around, no formal emergency has been imposed but many news companies have been targetted for disciplining. NDTV has been one of them. From the early days of this government, reports were published about how the company had juggled its finances. Allegations of money laundering were also levelled. There is little clarity about what the enforcement agencies found in their investigation of NDTV’s finances, but what is apparent is that the channel is visibly fighting suggestions that it is anti-BJP. Recently, it spiked an interview of former Finance Minister P Chidambaram, saying it couldn’t telecast anyone’s drivel. A noisy channel like Times Now that has progressively positioned itself as protector of nationalism – even when it’s twisting facts – is seen as the gold standard of Indian journalism.

Many newspapers have laid down their arms and are writing tamely. The front pages of ‘national’ newspapers are losing their bite. The Kolkata-based The Telegraph, which has hived off 40 percent of staff, showed courage by criticising Modi for his utterances and policies. But after Aveek Sarkar was overthrown in a family coup by his brother, the paper has become more circumspect. Were outside forces involved in the removal? Nothing will be known, but The Telegraph’s decision to downsize, taken by the new dispensation, sent shockwaves through the ranks and files of the press. Across the news industry, thousands of reporters have lost their jobs after demonetisation. As the working journalist movement has become toothless, there is no protest or outrage. Those who view the fourth estate as an opposition party would not be unhappy with the devaluation of reporters, whose quest for truth is seen as a subversive act. The world is waking up to the threat to journalism after the election of a post-truth US president, Donald Trump. The US media fraternity, which has been resisting Trump’s attack on it, embodies hope for preserving a free press here and elsewhere. 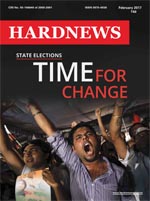