Why are the Ola and Uber drivers on a strike?

The confrontation between the striking drivers and the tech-based startups - Ola and Uber - is not as straightforward as it seems. Propelled forward as it is by demonetisation and a demand for rights

Manpreet an Uber driver, who didn’t want his real name published, cautiously approached us as we broke away from the crowd, at Jantar Mantar where under the banner of the Sarvodaya Drivers Association Delhi(SDAD), thousands of drivers are striking against the app-based taxi hailing services — Uber and Ola. “The misery that we go through has only compounded over a period of time. I don’t know what to do or where to go,” he says. Prior to being an Ola driver, Manpreet worked as a mechanic at an electrical appliances repair workshop – he could repair anything a fridge, air conditioner, tv, you name it – which afforded him a comfortable life. After seeing advertisements of Uber and Ola, he pawned his mother’s jewellery to buy a car. He says that if he could only foresee the government’s decision to demonetise higher denomination notes, he could have escaped his miserable fate. “I haven’t paid the loan that I took to buy the car. My daughter’s school fees has been pending for the last four months and I don’t have the money to take care of my pregnant wife’s medical expenses. I have lost everything,” he says in an anguished tone and breaks into a sob.

Many like Manpreet crowd the pandal at Jantar Mantar hoping that their voices and demands will be heard by both Uber and Ola, companies they joined to better their fortunes. That decision has meant that most of them are close to living out on the streets. Arvind, Manoj, Vir Singh and hundreds of others drivers have only one question, “A cycle-rickshaw driver charges rupees 20 for two kilometres (km), a kaali-peeli taxi charges Rs. 14 per km, then why does the Uber or Ola driver have to drive for Rs. 6 per km?” Ravi Rathore, vice president of the SDAD, believes that the low fares are a way to push the older drivers out and make way for ‘fleet’ drivers, “Uber and Ola, in the past two years, with our efforts consolidated the market and now that they have it, by forcing us to drive at Rs. 6 per kilometer, they’re leaving us with no option but to find other employment.” In the past few months, with the low fares the profit margins of the drivers have dramatically fallen. Even during ‘peak’ hours where fares are pushed upwards by 1.5 percent (surge pricing) – which is the most profitable hours for drivers – the 25 percent commission that both firms charge feels like a burden to them.  Ravi Agarwal, another member of the union, says, “The commission eats into whatever little we earn now. Even if we earn higher amounts during the peak hours, the commission at the end of the day hurts us. As more and more drivers ply on the roads, we don’t get as many rides.”

There are two reasons that have acted as catalysts for the the drivers to come out and protest: the first is their demand for rights and the other, which they admit albeit reluctantly, is the impact demonetisation has had on their business

In the past few months, both Uber and Ola have got into deals with car companies such as Mahindra, Nissan and Datsun, that are looking to both sell and lease cars to the hundreds of drivers who apply for a commercial license with the apps. According to the drivers, these tie-ups have led both firms to introduce nearly 50,000 new cars on the roads. They say that the companies entice young drivers to become their own bosses by either buying these cars under their names with letters from the tech-companies or leasing them out at Rs. 21,000 per month. What they say is that when a customer uses the app to book a cab, the first preference is given to the cars that are leased by the companies. The drivers who had joined in between 2013 and 2015, and had earned large profits are now suffering, they say, “They told us that we would earn 1-1.5 lakhs rupees a month, and now if we earn even 10-15 thousand it is a big deal.”

Those who privately own their cars feel that the entire system: the app, ratings, incentives and even getting passengers is now rigged against them. “We don’t get sawaris, and if we do we have to fulfill a steep target of rides per day. On top of this our app stops working. Even incentives work differently for different people and the system is completely opaque,” said Manoj Kumar. Ashwini Kumar, another driver, had another grouse, “The rating system is biased. If a customer rates us down, we end up paying Rs. 500 as penalty to the company. There is no transparency in the system for imposing penalties.” Another issue related to ratings is that most of the times, the customer has the last word and the driver does not get a say in the matter, “There is no way to redress these grievances. When we visit the offices of the companies we are roughed up by bouncers,” continued Kumar. 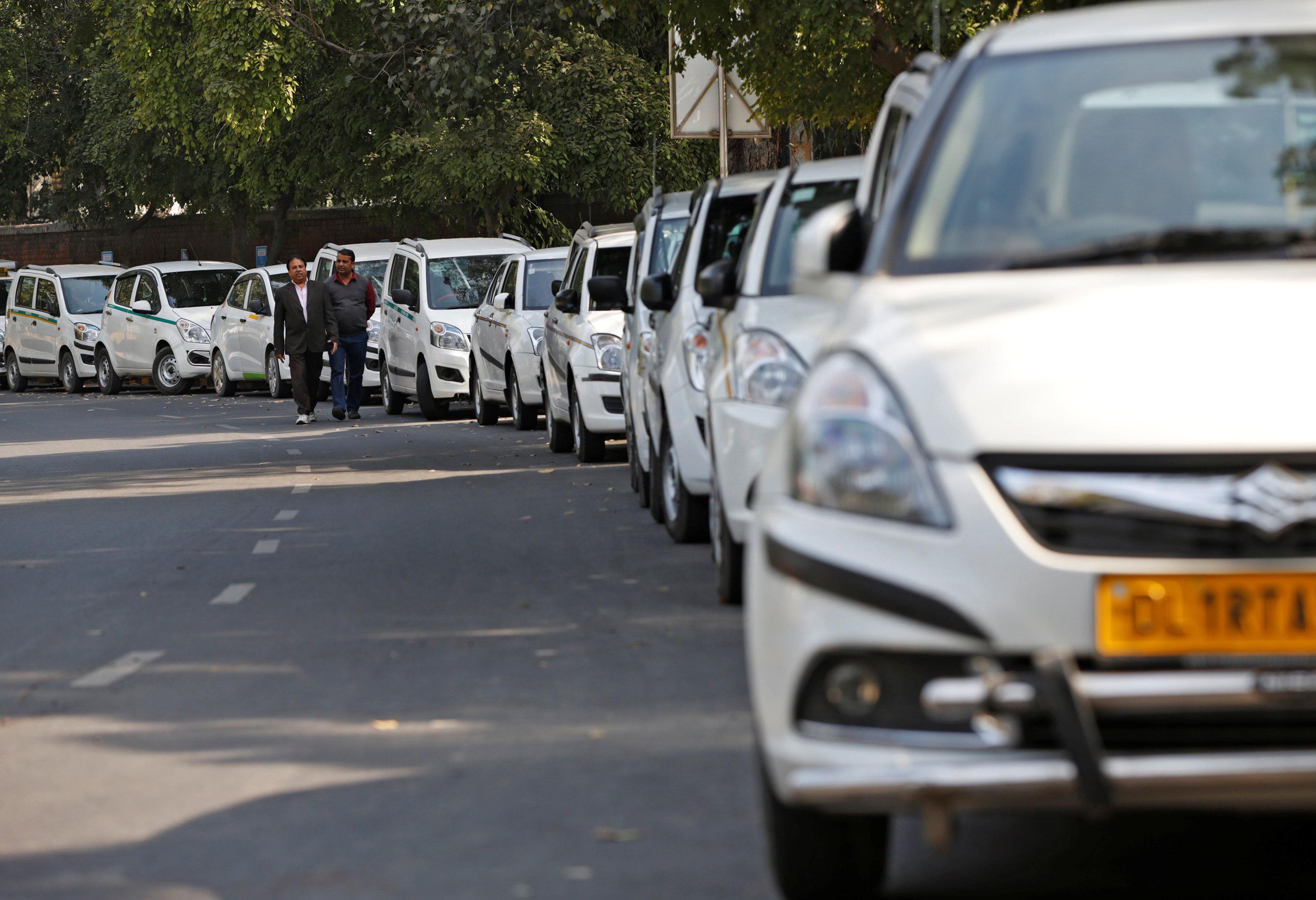 There are two reasons that have acted as catalysts for the the drivers to come out and protest: the first is their demand for rights and the other, which they admit albeit reluctantly, is the impact demonetisation has had on their business.

Post demonetisation, the ride-sharing schemes devised by both companies, has become one of the most popular choices for customers, but has been spurned by the drivers. “Our cash to paytm ratio used to be 60:40. After the note-ban the customers who were using cash were standing in line, and those who didn’t want to spend as much shifted to ‘pool’,” said a driver shouting over the others, as many heckled him, saying that demonetisation had left no impact on the business. When he began to talk reluctantly about the sharp rise in the number of pooled rides, they resigned themselves and concurred, “Ever since demonetisation, shared rides have increased, and they have destroyed our profits. We have to drive more for lesser pay, and one of our biggest demands is that this policy be done away with. Drivers loop endlessly to drop many customers, and end up paying more out of their pockets than earning. In the pool scheme they get fares as low as Rs 3 per km.”

Uber on the whole does not regard the drivers as employees, but as ‘partners’ who use the app. This means that despite spending 18-20 hours on the road, kept awake by caffeine pills, and contributing to the companies’ revenues, the drivers cannot avail medical insurance or other employment benefits.  “Recently, a driver was killed in an accident on Rao Tula Ram Marg while he was going to pick up a customer. We went to the office of the company and asked the authorities to deduct 20 rupees from our salaries and give to the wife of the deceased, the company said that this was not a part of their policy. However, when the earthquake hit Nepal the company deducted Rs. 100 from us. When it comes to supporting us they say there is no policy, they tell us that this is how it happens in the United States of America. When convenient they use us, and when we want something they snub us,” says Joginder Singh, as he held up the small pills he takes to keep awake.