In order to increase connectivity between Delhi and north eastern states, tax on air turbine fuel has been lowered from 25 percent to 1 percent

For the first time in the Delhi Assembly, the AAP-led state government presented an outcome budget on Tuesday which will focus on affixing accountability on the part of departments in the implementation of the budget allocations. Deputy Chief Minister and Minister for Finance Manish Sisodia said, “Outcome budget will be a contractual agreement between the government and different departments.” Delhi, which is among the fastest growing states in the country, is estimated to grow at 12.76 per cent in 2016-17 over 2015-16. The state government has once again given top priority to education and health in its budget, allocating a total of Rs 17,036 crore in FY 2017-18. The budget estimate for FY 2017-18 is Rs 48,000 crore.

Despite the failure of the state government to achieve its budgetary goal of Rs 24,000 crore in 2016-17, the finance minister did not levy any new tax in the budget. Calling it a tax-free budget, Sisodia said, “This is not just a tax-free budget but we have also reversed the taxes for the third consecutive time.” Meanwhile, in order to increase connectivity between Delhi and north eastern states, tax on air turbine fuel has been lowered from 25 percent to 1 percent.

With the municipal elections in Delhi drawing close, the government also tried to woo voters through its third full-time budget by allocating Rs 7,531 crore to municipal corporations—nearly 15 percent of the budget—for development of civic amenities. It includes Rs 1,718 crore for improving the status of urban sector, health and education. In a bid to attract the purvanchali voter base in the city, the government also announced construction of chhath ghats and allocated Rs 20 crore for the task. The Delhi Commission for Women (DCW) received Rs 20 crore—an amount three times higher than what it received in the last budget.

During his budget speech, Sisodia without naming Prime Minister Narendra Modi took a jibe at his decision to demonetise higher value notes in November last year. The minister said, “The decision of notebandi was taken by tossing a coin in the air without any brainstorming over the matter, unlike us.”

While Chief Minister Arvind Kejriwal praised the budget, Delhi Congress president Ajay Maken took to twitter to ask a series of questions from the government. In one of his tweets, Maken said, “You wrongly claim to have done wonders in education-- tell us why 10th board exam result slipped from 98.40% to 91% (worst in recent times).” 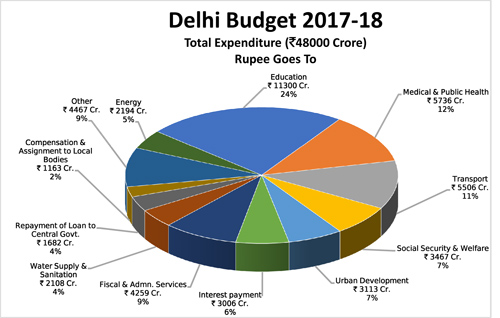