As debate over viability of EVMs soar, Delhi Government writes to LG for change in rules to conduct MCD polls on ballot paper

Raising questions about the validity of election results in Punjab, Delhi Chief Minister and Aam Aadmi Party (AAP) national Convenor Arvind Kejriwal blamed the Electronic Voting Machines (EVM) for their loss in Punjab claiming, “Due to EVM tampering 20 to 25 per cent vote share of AAP was transferred to the SAD-BJP alliance,” that led to their defeat in an election where they were touted as a probable winner. Kejriwal who is the second national leader to allege irregularities on part of the EVMs.

Perplexed over the outcome, the Delhi CM said, “Many experts, journalists and political pundits said there is an anger against Akalis and the AAP is sweeping polls. Still, AAP got only 25 per cent votes while SAD got 31 per cent, how is this possible?” Referring to his party’s post-poll booth-level analysis in Punjab Kejriwal said that they have come across such booths where they have received minimal to no votes despite intense campaigning by volunteers. Hinting at some irregularities Kejriwal said that on booth number 73 in Akhwana village the party received just three votes despite the fact that the seven volunteers had 17 family members who voted for AAP.

Kejriwal has now urged the Election Commission to recount the Voter-Verified Paper Audit Trail (VVPAT) generated from EVM and match them with the results so as to maintain faith in the validity of EVM and put to rest the rising debate over its usage in future polls. The VVPAT technology was put to use in 32 of the 117 constituencies in Punjab this election. Kejriwal said, “It is the responsibility of the Election Commission to keep people’s faith restored in EVMs.” 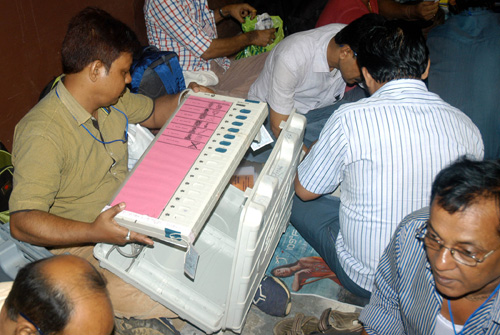 The Chief Minister levelled serious allegations on the BJP of tampering with the EVMs in Punjab and Uttar Pradesh in order to garner mandate. On questions that if BJP tempered the EVM how did Congress win in Punjab? Kejriwal said that it was a ploy to keep AAP at bay by the BJP and Akalis and to cover up their acts in UP by making their opposition, Congress, win in Punjab.

Earlier, Bahujan Samaj Party (BSP) chief Mayawati also alleged the BJP of manipulating EVMs, immediately after the UP election results started pouring in on March 12. The former UP CM whose demands for a probe into the tampering of EVMs has been dropped by the EC said that she will approach the top court in the matter so that fairness in results are ensured. Calling it a “failure of the democracy” the BSP Supremo said that if BJP comes to power in 2019 they will end reservations. Behenji went on to say that the success of the BJP is not a victory of honesty, but a mockery of the Indian democracy. The party will now hold a nationwide agitation and observe 'Black Day' on 11th of every month at its party headquarters in UP and Uttarakhand to protest against the BJP and its antics. 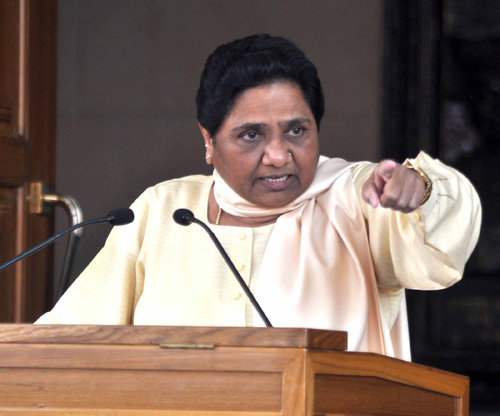 Kejriwal took responsibility of  AAP’s poor show in Goa elections where the party contested over 39 out of 40 seats but failed to open its account. More than three dozen of its candidates lost their deposit after the results were announced. Kejriwal had campaigned vigorously in Punjab as well addressing more than 90 rallies and sabhas.

Following the debacle of the party in Punjab and Goa, and amidst growing concern over the genuinity of EVMs, AAP had demanded that the MCD polls scheduled to be held in Delhi next month be conducted on paper ballots. Delhi Congress Committee President Ajay Maken had also joined in on the uproar and approached the commission over similar demands. The demands, however, has been rejected by the state Election Commissioner SK Shrivastava. The SEC expressing his faith in the EVM said that the EVMs are “completely safe" and the poll preparations are being done keeping in mind the use of EVMs.

Taking a jibe at the demands from the AAP and the Congress, Delhi BJP President Manoj Tiwari said that Kejriwal should first call for re-poll of Delhi election and Congress should ensure re-polls of Punjab election through ballot papers.

Citing the Supreme Court ruling which stated that the EVMs are vulnerable and prone to tampering the two-time Delhi CM said that if there is a possibility of tweaking the EVMs it will lead to the “end of the Indian democracy.”

Meanwhile, BJP leaders rubbished the claims of the Arvind Kejriwal and Mayawati saying that people should accept defeat with grace rather than make noises and complain about it.

It is worth noticing that challenging the validity of the EVMs by losing parties have become a trend in recent times. The BJP too expressed their anguish over the use of EVMs in the past with its senior leader LK Advani opposing its use before 2014 elections. In 2013 BJP leader Subramanian Swamy filed a PIL in the SC over the safety of EVMs after which the apex court ordered for the introduction of VVPAT technology in a phased manner. The use of EVM began in as early as 1980 after the commission found several resources and logistical problems in going ahead with ballot papers.

(With input from UNI)

As debate over viability of EVMs soar, Delhi Government writes to LG for change in rules to conduct MCD polls on ballot paper
Hardnews Bureau Delhi