“It’s not their love for cow, it's their hatred against Muslims”

Eighteen days after Pehlu Khan was attacked in Alwar while he was transporting cows for his dairy business, the family assembled at Delhi’s Jantar Mantar for a dharna under the aegis of the alliance of Left and civil rights organisations. They are yet to receive any word of assurance from the centre or the
state government

Protesting against the delay in providing justice to Pehlu Khan and nabbing the perpetrators, Hussain Khan, Pehlu’s uncle said, “The affinity that these alleged gau rakshaks show towards cow is not true, beneath it is their hatred for Muslims.” Threatening to commit self-immolation if the family is denied justice, Hussain was sitting on a dharna at the Jantar Mantar along with Pehlu’s mother Anguri Begum and his three daughters under the aegis of the alliance of Left and civil rights organisations--Bhoomi Adhikar Andolan (BAA). 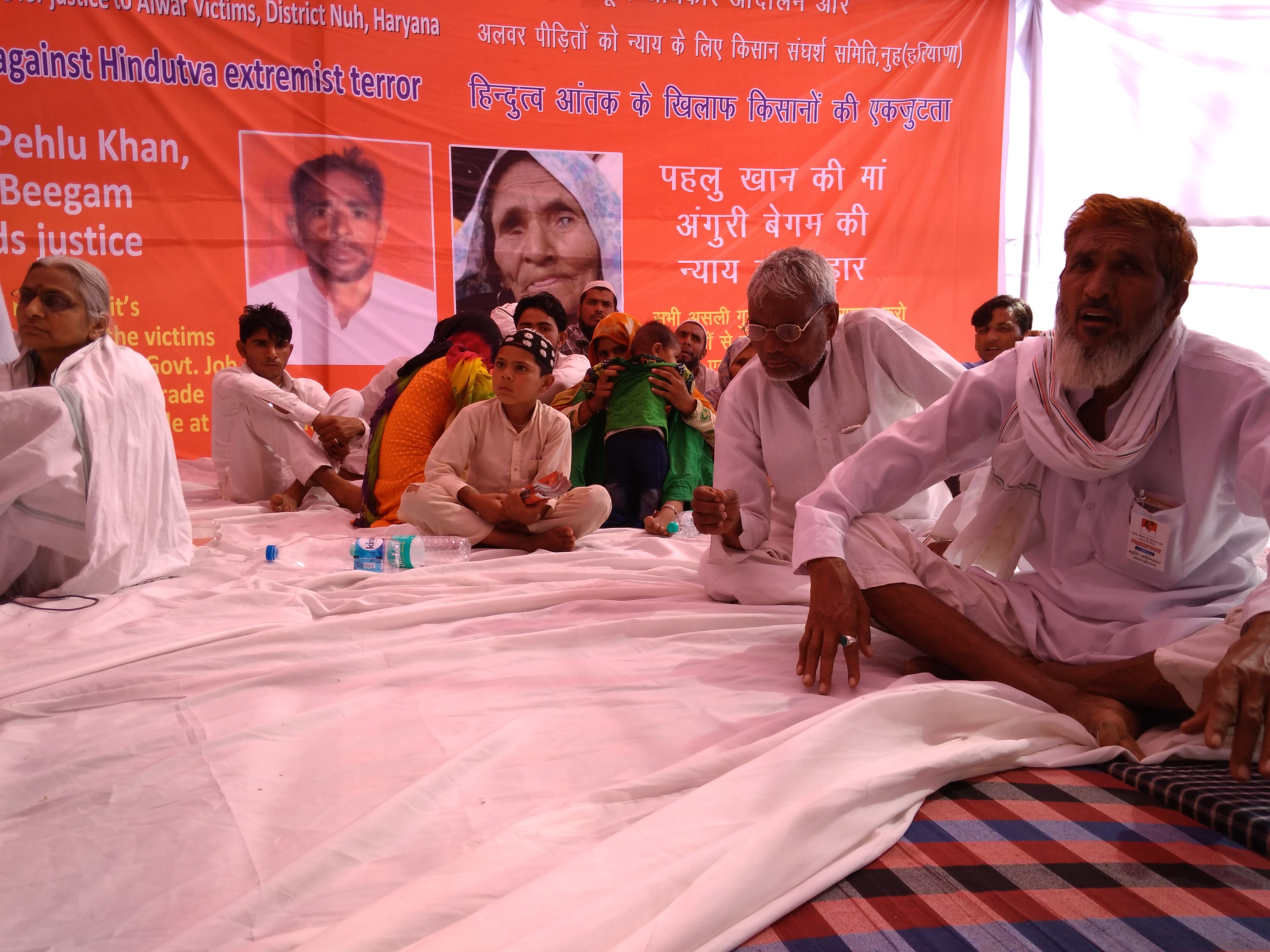 Talking to Hardnews, the family complained about the poor state of law and order in the regions of Mewat. Mohammad Yusuf, a brother of Azmat who was injured in the incident, said that none of the government representatives has tried to meet them or come to their aid after the killing. “We protested in Jaipur, Mewat before coming to Delhi, but no officials have tried to contact us or listen to our grievances,” said Yusuf.

“When a Prime Minister of a different country comes to India, Narendra Modi takes selfies with them in the metro. But when his own citizen is brutally murdered, none of the leaders even show up,” said leaders of the BAA.

Recounting the incident, Hussain said that the attackers allowed the driver of the auto to flee from the scene since he was a Hindu and beat Pehlu and four others, including Pehlu’s sons Aarif and Irshad who are still recovering. Pehlu had eight children and was the sole breadwinner of the family.  The attack took place on April 1 on the border of Rajasthan and Haryana.

The family is asking the government to set up a Special Investigation Team (SIT) under the direct supervision of the Supreme Court to probe the role of the police and the Sangh Parivar in the “conspiracy” against Muslims which led to the murder of Pehlu Khan in Alwar. 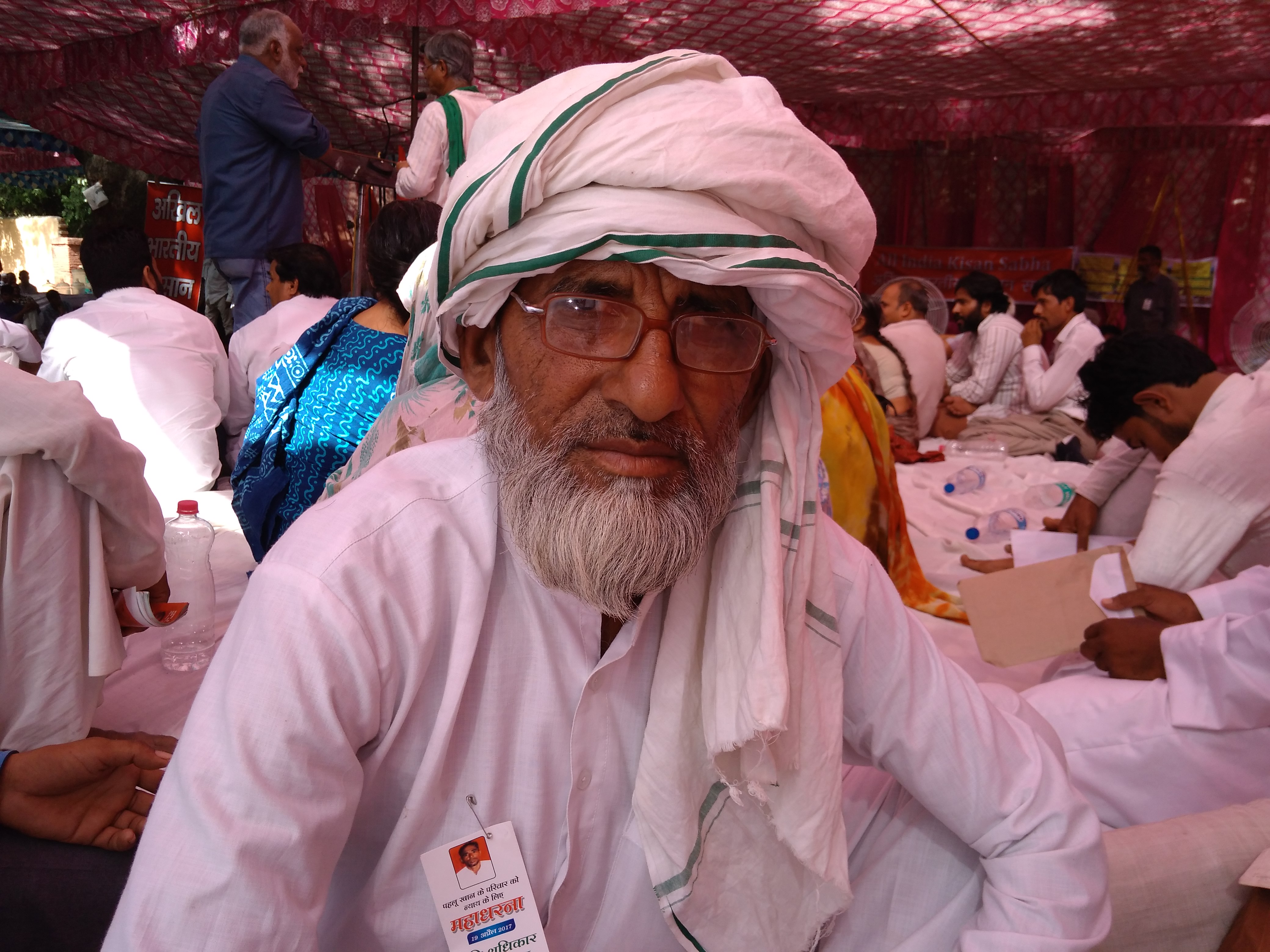 Exhibiting their anger against the sluggish attitude of the administration, the protestors raised slogans against Prime Minister Narendra Modi. “When a Prime Minister of a different country comes to India, Narendra Modi takes selfies with them in the metro. But when his own citizen is brutally murdered, none of the leaders even show up,” said leaders of the BAA.

The All India Kishan Sabha (AIKS), the peasants wing of the CPI(M), participated in the protest and wrote a letter to the Prime Minister, demanding Rs 1 crore as compensation for Pehlu Khan’s family and a government job for one of his family members, besides Rs 25 lakh each to other victims.

58-year-old Pehlu Khan, a dairy farmer from Mewat district, succumbed to his injuries three days after he was beaten up by gau rakshaks on the pretext of cow trafficking, despite having legal papers from the municipal corporation.

While the meat business and slaughterhouses had already closed down in the vicinity of Mewat, the dairy business operated by the community had also plummeted. Umar Mohammad, who had come from Nuh, said, “There is fear among the people in the area because the BJP has said that it will not allow consumption of eggs. The dairy business has also closed down since the incident.”

It is worth mentioning that India is the largest producer of milk and dairy products in the world and over 80 percent of the dairy industry is dependent on small and medium dairy farmers living in rural areas of the country. The business involves buying, selling, transporting and exchanging of cows and other cattle and if such vigilantism continues, it is likely to affect the trade.