JNU professor Abdul Nafey, who was recently in Caracas as part of an international gathering of intellectuals, denies that the ongoing crisis in Venezuela is a humanitarian crisis

A series of protests that began in March after Venezuela’s  Supreme Court dissolved the Parliament and transferred all the legislative powers to itself have been continuing unabated in the country which is suffering from deep recession and hyperinflation. Oil reserves had once put the Latin American nation of Venezuela on the pinnacle of success under its charismatic leader Hugo Chavez but its mismanagement by the authorities have now forced the nation to the brinks of a major economic collapse under the current regime led by President Nicolás Maduro. In order to placate the protesting masses, the government has although announced its intention to redraft a new constitution and form a constituent assembly that will help the country regain its lost peace. However, it has done little to keep people from occupying the streets. Professor Abdul Nafey of Jawaharlal Nehru University (JNU), who was recently in Caracas as part of an international gathering of intellectual, academics and journalists and received first-hand information from President Maduro about his decisions to convene the National Constituent Assembly (NCA) in the oil-rich country, denied that the ongoing crisis in Venezuela is a humanitarian crisis.

Talking to the media, Professor Nafey said, “Though the protests are going on for over seven weeks, most of them are scattered and isolated in nature, taking place in middle class and upper middle class areas.” The protests have witnessed the death of over 50 people since April. However, Professor Nafey said, “None of these deaths has taken place at the hands of the police force or the military. The military has not been engaged by the President, and the police only resorts to the use of water cannons and tear gas to break the crowd. The shots are being fired by snipers placed by the opposition which is funded by foreign powers to escalate the conditions.”

Calling it a propaganda and an intensified campaign by the United States against their country, the Venezuelan embassy in a statement said, “President Trump has personally encouraged the violent protestors, giving them hope of an imminent intervention. US and European countries have been trying to blackmail Caribbean countries to change their stance in support for Venezuela, aiming for a majority in the group of Organisation of American States (OAS) against Venezuela in order to justify their planned intervention.” 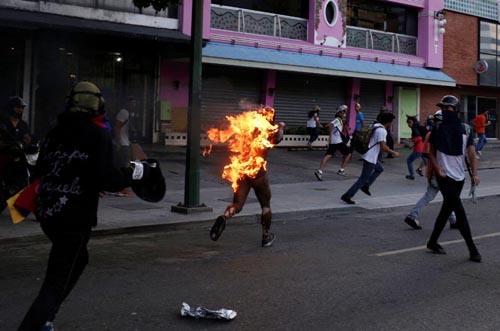 Reports suggest that the country which is facing acute shortage of food items, medicare and services, accompanied by lowered purchasing power, has forced lakhs of Venezuelans to migrate to Colombia which has lighter border regulations. Professor Nafey, however, claimed, “Most of the people migrating to Colombia were initially immigrants from Latin America and European nations who settled in Venezuela during the reign of Chavez. The country has extremely porous borders with Colombia and that has facilitated a free movement for decades.” Professor Nafey went on to add, “The shortage of food items and medicare is largely accounted to hoarding by black marketeers who are smuggling it to Colombia using the same borders. The government has been unable to curb this illegal movement of products out of Venezuela.”

Venezuela has been reeling under economic crisis for the last couple of years due to growing inflation rate and the depreciation of its currency Bolivar because of falling crude oil prices in the international market. The country has faced a series of anti-government protests for over seven weeks in which more than 45 people have lost their lives. Nearly 2,000 people have been detained and one protester was set on fire on the streets of Caracas a few days ago. Professor Nafey remarks, “The first thing that President Maduro needs to do is check the inflation rates in Venezuela. The country is one of the poorest in the region, despite being one of the largest producers of oil in the world which is a cause of concern.”

On asking why isn’t the President taking a tough stance to end the protests if they are channelled by external powers, embassy officials said, “That’s what the US wants, a reason to enter into Venezuela and openly intervene in the government. The military, if brought in by the President, will provide an opportunity to the west to cast the presidency in a bad light. The western media has so far projected the nation to be in a state of turmoil, and President Donald Trump has already cleared his intentions regarding Venezuela.” The embassy also indicated that there have been “acts of provocation” along its southern border where Colombia has moved its tanks following the meeting between Colombian President Juan Manuel Santos and US President Trump.