The Chinese are working relentlessly to undermine the authority of the Dalai Lama. Their intransigent campaign could mean that Beijing appoints his spiritual successor

When the Tibetan Buddhist leader, His Holiness the Dalai Lama, visited Tawang in Arunachal Pradesh, the Chinese media saw red. It promptly announced that India would be punished for allowing the Dalai Lama to visit a disputed region, claimed by China. The promised reprisal is unveiling slowly. If the government is not wise to the Chinese threat, then India could face serious aggravation on its border.

The question that many would ask is why is the Chinese government under President Xi Jinping so prickly about the Dalai Lama and the importance accorded to him in India and elsewhere? There are no simple answers, but China’s muscular response to the Dalai Lama and India suggests an intense power struggle in Beijing before the Standing Committee to the Politburo is reconstituted later this year. What is also visible is that the Chinese government wants to control the Tibetan Buddhist leadership succession after this Dalai Lama. One key step to this was already accomplished long ago when the Chinese installed a pro-China Panchen Lama in Lhasa. Obedient to the party and loyal to the Chinese State, the ‘Chinese Panchen Lama’ is being pushed forward as an alternative to the Dalai Lama, a man widely loved by Tibetans as their supreme religious leader.

President Xi, whose power and influence are no less than those of the late Mao Xedong or Deng Xiaoping, would not like to be seen as a weak leader unable to defend the territorial integrity of China by not making an example of the Dalai Lama, who wants greater autonomy for the Tibet region, and his supporters. China’s response has understandably progressed from being perfunctory to threatening. Countries that do business with China have learnt to their discomfort how badly it reacts to any nation extending hospitality to the Dalai Lama. They made an example of Mongolia that tried to assert its independence from China’s arc of influence when it agreed to a visit by the Dalai Lama. Mongolia initially believed in the fiction that India could compensate for China’s expected estrangement, but it did not turn out that way. Cash-strapped Mongolia that had needed China’s munificence all these years sought a grant from India for sorting its economic troubles, but New Delhi, despite promising a credit line, could not cough up the money when Ulaanbaatar needed it the most. Mongolia had to bend low in front of China for a bailout and also commit that it would not host the Dalai Lama ever again. 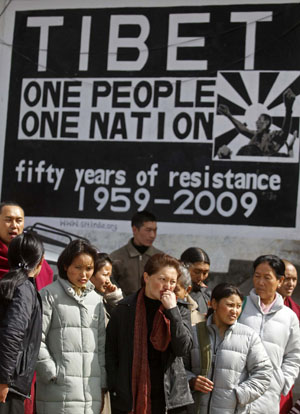 Indian government officials have been expressing helplessness over how the events connected with the Dalai Lama have panned out. “We do not really have much to do,” they say. “If the Dalai Lama decides to travel to Mongolia or meet the President of India as part of a delegation of Nobel Prize winners then what does the Indian government have to do?”

China’s foreign policy hawks remain unimpressed by these explanations and there are plenty of reactions emanating from their publications that claim that India has hosted a Kalachakra event in Bodhgaya where Buddhist scholars had come from different parts of the world. The Chinese did not allow visas for Tibetan Buddhists to travel to India. There are other issues that rankle the Chinese – for instance, the remark of the Arunachal Pradesh Chief Minister that his state borders Tibet and not China.

The Chinese want to teach India and the Dalai Lama a lesson. With this explicit purpose, they have been working towards deepening the cleavages that exist in the Tibetan school of Buddhism. Ever since the Dalai Lama excommunicated a tantric spirit, Dorje Shugden, which was also presented as a protector of his Gelug School, Tibetan Buddhism is in turmoil. The controversy has attracted attention in the West following demonstrations by Dorje Shugden practitioners, especially Kelsang Gyatso’s Britain-based New Kadampa Tradition which broke away from the Gelug school in 1991. Other factions supporting Dorje Shugden are Serpom Monastic University and Shar Ganden monastery, both of which separated from the Gelug mainstream in 2008. The Dalai Lama had called Dorje Shugden a “dark force” that undermines the practices of the Gelugpas. As the Dalai Lama wants to foster a harmonious community, he shunned a force whose practices were considered aggressively divisive.
The shunning of the 17th-century spirit has seen a backlash from many members of this faith who have been protesting all over the world. They claim that the Dalai Lama is dictatorial and does not allow the freedom of religious practices within the faith. On the other hand, the Dalai Lama and his millions of followers see the hand of the Chinese in the spread of resistance by the followers of Dorje Shugden. Their endeavour is to hurt the credibility of the Dalai Lama and show him up as a divisive leader who cannot be trusted to lead the Tibetan Buddhist community within Tibet and outside.

On February 4, 1997, the bizarre murder took place of the principal teacher of Buddhist dialectics, Lobsang Gyatso, and his two students in Dharamsala. The police investigation linked the murder to Dorje Shugden followers in the community of exiles. A further probe revealed that the perpetrators of the crime escaped to China. Later, there was reportedly an attempt to kill a close associate of the Dalai Lama and blame it on the Tibetan exile establishment in India. The conspiracy was discovered in time and nipped in the bud.

News agency Reuters conducted an investigation into the Chinese involvement in building the Dorje Shugden resistance to the Dalai Lama. The report showed that the Chinese communist party and some of its frontal organisations were involved in promoting Shugden followers as opposed to those of the Dalai Lama. The probe revealed that the Shugden followers were financed to rebuild monasteries and placed in important positions. To reiterate, the purpose was to diminish the authority of the Dalai Lama and then ensure that his word does not really carry much weight when he prophesies his successor.

Indian government sources claim that China has worked hard to control the narrative on Tibetan Buddhism especially when it comes to undermining the authority of the Dalai Lama and the Tibetan exile establishment and the sway it has in religious matters.

China has ensured that the number of Tibetans in the community of exiles who provided leadership is falling dramatically. The Karmapa Lama has brought out this fact in an exclusive interview to Hardnews. He said that the growing influence of China has resulted in many Tibetans leaving India. Some have returned to China and many others have left for a destination in Europe or the US due to the problems they face relating to identity papers and travel documents provided by India. The Karmapa says that 4,000-5,000 Tibetans are leaving India every year without being replaced by fresh refugees from Tibet. Many, who went a few years ago from India to Tibet, find it difficult to return. This reporter met some of these Hindi-speaking Tibetans in Lhasa. They had crossed over from India at a time when border surveillance was lackadaisical. Subsequently, they found it difficult to return to India – a country they missed due to the freedom of expression, prevalence of English, and its multi-culturalism.

Ever since the Chinese tightened the squeeze on the movement of Tibetan monks who earlier routinely walked through the forbidding heights of the Himalaya to reach Dharamsala, the desperation in the Tibetan exile establishment has been growing. They also worry over the increasing influence of China globally and how other countries are kowtowing to it. As stated earlier, many countries just do not want to entertain the Dalai Lama anymore lest it antagonise Beijing. Countries that are recipient of Chinese investments are particularly cautious.

In these circumstances, the Chinese are growing more confident that they will be able to question the authority of the Dalai Lama. Their advantage is that they control the second most important leader, the Panchen Lama, and several other senior Lamas who populate the many monasteries in Tibet. Rather cleverly, they are funding many of the Tibetan monks from the East Tibetan region, where the Dalai Lama does not have much sway, and bringing them to the area around Lhasa. These monks are followers of the Dorje Shugden school of thought and driven by the desire to retrieve Tibetan Buddhism from the control of the Dalai Lama.

Bolstering Chinese hold over the Tibetan Buddhist narrative is that it will not recognise any of the reincarnations until Rule 5, as laid down by the Chinese government, is followed. Though the Chinese government would say it is “secular” and would not like to interfere in the process of selection of the Dalai Lama’s successor, it is actually preparing the ground for it to be decider on who will really lead the Tibetan Buddhists. Insiders say Beijing is in a position to reject the Dalai Lama’s nominee.
His detractors even claim that he is not keen on announcing his successor as he wants to destroy his own sect. It is a vicious no-holds-barred campaign with the Chinese government displaying a tenacity to not just control the region but its religion too. Its phenomenal economic rise in the past 20 years has given the Chinese government an opportunity to neuter the only threat it has to its integrity.

India, which has provided refuge to lakhs of Tibetan Buddhist refugees, is a bit diffident about its Tibet strategy. While it is monitoring what kind of punishment it will be dealt for allowing the Dalai Lama to visit Arunachal Pradesh, it is not actually setting out to provoke Beijing. It is China that interprets Indian actions harshly.

There is a view that President Xi could use the threat to punish India as an opportunity to firmly establish the balance of power in Beijing’s favour. The manner in which China has colonised Pakistan through the China-Pakistan Economic Corridor (CPEC) and the way it has made Russia do its bidding in the region leaves little space for India to manoeuvre. What compounds New Delhi’s worries is that its Tibet policy and the fact that it has agreed to host so many refugees since the 1960s was largely supported by the United States. Now the US under President Donald Trump has a different view of the world. Unexpectedly, he sent a delegation to the Belt and Road forum hosted by China. India did not attend, hoping to find takers for its opposition to Beijing’s policy to ‘colonise’ countries in Africa and Asia by masking its real intentions under the garb of this communication initiative.

This is a setback for India. It is, in many ways, left with a policy that has few takers in a transformed world. Now, the question is: how will India deal with Tibetan Buddhists in the future? Leverage their presence to put the Chinese on the defensive or get real with the fact that the numbers of the refugees will diminish further unless they are given Indian citizenship? This would also involve realignment of the way Tibet is perceived by Indian strategists.