When the Dalai Lama turns 82 in July, the world will again be reminded of the succession crisis that looms because of the abduction of the 11th Panchen Lama, Gedhun Nyima, by the Chinese

For many people, the image of a Buddhist monk is a placid, shaven-headed, perennially smiling man. On closer examination, though, that image comes apart. If history is anything to go by then Buddhism has as much blood on its hands as the Catholic Church did during the Inquisition. Tibetan Buddhism has a particularly long and chequered history of monks self-immolating, prominent teachers being murdered by a sub-school which many consider a dangerous cult, and a spiritual head being kidnapped as soon as he was anointed. At the heart of this lies a historical annexation that set in motion a chain of bloody events which remains in motion even today. For at least 1,000-odd years, Tibet has had a complex history with its neighbour to the east, China. The first known interaction between the two states came in 640 when the Tibetan king, Songtsan Gampo, married Princess Wencheng, a niece of the Tang Emperor, Taizong. He also married a Nepalese princess. Both wives were Buddhists, and this may have been the origin of Tibetan Buddhism. When the Mongols’ Yuan Empire fell in 1368 to the ethnic Han Chinese Ming, Tibet reasserted its independence and refused to pay tribute to the new Emperor. In 1474, the abbot of an important Tibetan Buddhist monastery, Gendun Drup, passed away. A child born two years later was found to be a reincarnation of the abbot and was raised to be the next leader of that sect, Gendun Gyatso. After their lifetimes, the two men were called the First and Second Dalai Lamas. Their sect, the Gelug or ‘Yellow Hats’, became the dominant form of Tibetan Buddhism. The Potala palace in Lhasa was constructed as a symbol of this new synthesis of power. The Dalai Lama made a state visit to the Qing Dynasty’s second Emperor, Shunzhi, in 1653. The two leaders greeted one another as equals. For a long period after that Tibet was more or less an autonomous region. The Simla Convention granted China secular control over ‘Inner Tibet’ (also known as Qinghai Province) while recognising the autonomy of ‘Outer Tibet’ under the Dalai Lama’s rule. Both China and Britain promised to “respect the territorial integrity of [Tibet], and abstain from interference in the administration of Outer Tibet”. Tenzin Gyatso, the current Dalai Lama, was taken to Lhasa in 1937 to begin training for his duties as the leader of Tibet. He would remain there until 1959, when he fled into exile in India. In 1950, the People’s Liberation Army (PLA) of the newly-formed People’s Republic of China invaded Tibet. With stability reestablished in Beijing for the first time in decades, Mao Zedong sought to assert China’s right to rule over Tibet as well. The PLA inflicted a swift and total defeat on Tibet’s small army, and China drafted the Seventeen Point Agreement incorporating Tibet as an autonomous region of the People’s Republic of China. This was followed by decades of brutal suppression.

The Panchen Lama is the second-highest leader in the hierarchical rung of Tibetan Buddhism. Like the Dalai Lama, the Panchen Lama too belongs to the Gelug school of Buddhism. The title ‘Panchen’ derives from the Sanskrit word pandita, which means ‘scholar’, and the Tibetan term chen po, which means ‘great’. In 1447, the first Dalai Lama built a great monastery, Tashi Lhunpo, in the city of Shigatse, 250 km west of the country’s capital, Lhasa. The abbots of Tashi Lhunpo came to be known as ‘Panchen’, because of their scholarly reputation. In the 17th century, the fifth Dalai Lama gave the title of ‘Panchen Lama’ to his teacher, the abbot of Tashi Lhunpo, and declared that he would continue to be reborn in an unbroken lineage of successors. Thus the line of Panchen Lamas was begun. This is not to say that the two Lamas have always been on amicable terms. A falling out between the 13th Dalai Lama and the ninth Panchen Lama led to the Panchen Lama leaving Tibet for China in 1923. When Choeki Nyima, the ninth Panchen Lama, passed away, Choeki Gyaltsen was anointed as his reincarnation. Unlike his predecessor, Gyaltsen was not content with being a Chinese puppet. In 1962 he presented to the government a petition detailing the brutal suppression of the Tibetan people during the invasion. For his trouble, the 24-year-old lama was dismissed from his government positions, publicly humiliated, and imprisoned. He was released to house arrest in Beijing in 1977. The Panchen Lama relinquished his role as a monk (although he was still the Panchen Lama), and in 1979 he married a Han Chinese woman named Li Jie. In 1983 the couple had a daughter named Yabshi Pan Rinzinwangmo. By 1982 Beijing considered Lobsang Gyaltsen to be rehabilitated and restored him to some positions of authority. At one point he was vice-chairman of the National People’s Congress. However, in 1989 Gyaltsen returned to Tibet, and during his visit, he gave a speech mildly critical of China. Five days later he died, officially of a heart attack. He was 51 years old. Many allege that he was poisoned. 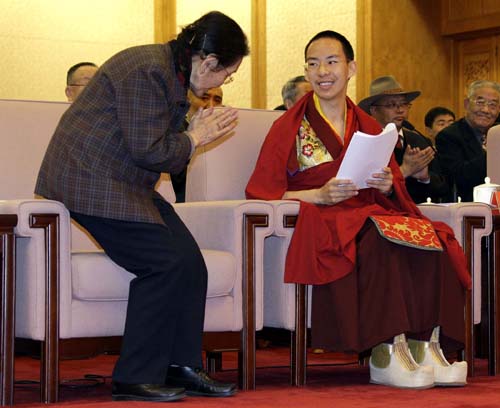 It is his premature death that lies at the heart of the current succession crisis in the Gelugpa school of Buddhism. Upon the death of Choeki Gyaltsen, the Gelug school was thrown into deep turmoil. For one, the deceased Panchen Lama had a daughter. She is the only known offspring in the 620-year history of either the Panchen Lama or Dalai Lama reincarnation lineages. Did this mean that she could be anointed? The quest for the 11th Panchen Lama was complicated by the animosity between the Chinese rulers of Tibet and the Dalai Lama in exile in India. In May 1995, after consulting the state oracles and performing various traditional divination rituals, the Dalai Lama announced the selection of six-year-old Gedhun Choekyi Nyima as the 11th Panchen Lama.

Two days later Gedhun Nyima was taken into Chinese custody. He has not been heard from ever since. The Chinese say that Gedhun Nyima is alive, hale and hearty. In all likelihood he is dead. In his place Beijing has enthroned a pretender, Gyaltsen Norbu, who serves as a conduit for Chinese propaganda about Tibet. Unless something changes, an epic stand-off is quite likely once the Dalai Lama dies. The Chinese-appointed Panchen Lama might anoint a Dalai Lama who will be brought up to be sympathetic to the Chinese annexation. The main worrisome consequence with the Dalai Lama gone is the further radicalisation of the Tibetan movement. The Dalai Lama has been long proposing the “middle way”, which means accepting Tibet being part of China, and asking for enhanced autonomy. There are groups within the Tibetan community in exile that support a more radical movement, called Rangzen, which aims at seeking independence from China. The Dalai Lama’s death could empower this group further and set off a series of violent conflicts similar to that witnessed during the Avignon papacy. To avoid this scenario, the Dalai Lama might select his own reincarnation while he is still alive—a theological twist known as madhey tulku—which would give him the chance to train a successor and avoid the gap in leadership that has always been a time of instability for Tibetans. This would be a workaround which would rouse much controversy but would ensure that the line of succession remained intact. All said and done, the fate of Tibetan Buddhism would still hang in the balance.