The Monarchy of Virat Kohli

Hardcore cricket fans remember the sight clearly. A slouching Anil Kumble emerging from the pavilion in the Antigua cricket ground with his jaw bandaged in the manner that Sikh men use a strip of cloth to keep their beards in place. In Kumble's case, it was to keep his broken jaw intact. Shortly after that Kumble dismissed Brian Lara with a broken jaw no less. When asked about his heroics, this is what Kumble had to say, "At least I can now go home with the thought that I tried my best." Perhaps a similar sentiment can be easily applied to Kumble's coaching stint of one year. He goes home knowing that he did his best. Kumble was a dedicated coach who left no stone unturned in his quest to help the Indian team reach greater heights. One anecdote that came out about this in the media was how he even went to the extent of bowling left-arm spin to help Cheteshwar Pujara overcome the challenges posed by Steve O’Keefe in the Test series against Australia. Kumble coached the way he played. By giving his hundred percent.

The only regret he will have is that unlike the Antigua test, his efforts as a coach were rarely appreciated. Instrumental in his unceremonious eviction from the post of the coach was the Indian cricket captain Virat Kohli. Long rumoured to be a petulant brat, there had been some talk about how Kohli had finally matured as a captain and a player. Critics cited his magnanimous behaviour after the Champions Trophy final as evidence. Yet, it was two days after this supposed show of sportsmanship that Kumble abruptly resigned. His words were telling in this regard. One key excerpt from his resignation letter reads, "I was informed for the first time yesterday by the BCCI that the Captain had reservations with my ‘style’ and about my continuing as the Head Coach. I was surprised since I had always respected the boundaries between Captain and Coach. Though the BCCI attempted to resolve the misunderstandings between the Captain and me, it was apparent that the partnership was untenable, and I, therefore, believe it is best for me to move on.Professionalism, discipline, commitment, honesty, complementary skills and diverse views are the key traits I bring to the table. These need to be valued for the partnership to be effective. I see the Coach’s role akin to ‘holding a mirror’ to drive self-improvement in the team’s interest."

The lines about holding a mirror are key here. Kumble's only fault was that he held up his end of the bargain: try and analyse the weaknesses of his team and help them correct said weaknesses by offering analysis and corrective measures. This was probably a counterproductive measure in a team which was beset with the problem of superstar culture as Ramachandra Guha had so precisely put it in his letter to the committee headed by ex-Comptroller and Auditor General Vinod Rai. Offering suggestions for improvements would be useful if the team concerned is interested in improving. It's a well-nigh impossible task if the team concerned has players with humongous egos like that of Kohli and Co. 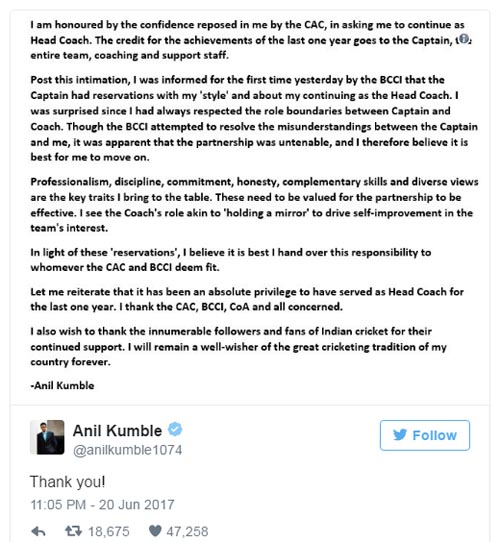 The role of Head Coach of the Indian cricket team is difficult precisely because of this reason. It is in stark contrast to the role of coaches at the junior level. Unlike a Tarak Sinha or Ramakant Achrekar who moulded young impressionable cricketers into the legends they are, coaches at the senior level have an entirely different set of tasks at hand. Man-management is the unsaid but most important part of the job description. Most players who make it to the Indian cricket team nowadays are already stars from the get go. When a Hardik Pandya plays his first one-day international, he does so know that he is already a star in IPL and followed by millions of die-hard cricket fans. In such a situation, the task of coaching instead transforms into soothsaying. The singular reason that John Wright succeeded in his tenure as head coach and Gary Chappell did not is that of their approach to handling egos the size of the Titanic. This is also probably the reason why Ravi Shastri was Kohli’s preferred choice for team coach. Shastri is known to wax eloquent about the Indian cricket team in dulcet tones even when the team is losing. He gave his interview for the post of head coach sipping beer in a swimming pool and teleconferencing at the same time. What Kohli wants effectively is not a head coach per se but a cheerleader who will routinely massage his ego while offering words of comfort whenever he does something foolish and immature.

Kumble did not help his cause by trying to involve himself in the central contracts issue. Kumble had given a presentation to the COA that proposed a 150 percent hike in the remuneration for Grade A players and a commensurate hike for the support staff as well. Given that the BCCI are known to be notoriously stingy paymasters such a proposal did not go down well. Two weeks after Kumble made his presentation, reports emerged in the media of the rift between Kohli and Kumble. The timing was suspicious, to say the least.

Indian cricket has had powerful captains before. Sourav Ganguly, Tiger Pataudi, Sunil Gavaskar and MS Dhoni come to mind. All of them had considerable sway over the scheme of things but none of them ruled with the absolute authority that Kohli does now. Compared to them, Kohli is an absolute monarch. The old guard of BCCI is currently in disarray, the court-appointed committee of administrators is reeling under the resignation of Ramachandra Guha and in the absence of a coach to rein him in, Kohli has complete and unchecked power.

In a similar coach-captain fight in England in 2008-09, the England and Wales Cricket Board (ECB) sacked both coach Peter Moores and captain Kevin Pietersen. In India, we just bowed to the wishes of the reigning captain. Perhaps that is the difference between an amateur honorary set up with pretensions of greatness and a bonafide professional set up. In this instance, it is only Kumble whose head will roll.

Kohli has now won the right to be anointed as the undisputed and unchecked monarch of Indian cricket. Yet it is only now that his mettle and temperament will be truly tested. There will be no more home tours to play and win easily and comprehensively. In the absence of a stable and cerebral coach like Kumble, it is upon him that the leadership burden falls entirely. The next few years will make or break Kohli as a cricketer and a captain. The upcoming tours are all on foreign shores. India tours Sri Lanka (July-August), South Africa (December-February) and England (June-September 2018). Every single one of these tours will be against tough, determined opposition and on pitches that the Indian team might find difficult to master. England and South-Africa are known to produce pitches that swing viciously and everyone knows that swing is not something that Kohli handles well. Evidence of that was on display in the Champions Trophy final when Mohammed Amir bamboozled Kohli completely on what was a flat pitch with no grass. As Kohli will soon find out on these gruelling away tours, the systemic problems that plague Indian cricket are beyond the power of a single individual to fix. Today Kohli might claim victory in his turf war against Kumble, tomorrow it could well be his turn.