‘Brazil is back in the Game’

As Brazil reels under a political crisis, Ambassador Tovar da Silva Nunes speaks to Hardnews about the current situation in the country and the scope and depth of the relationship it shares with India 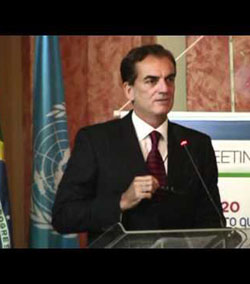 It is stated that political instability has hurt Brazil’s economy. Don’t you think the reverse is truer?
I would rephrase your question from a different perspective. From a historical viewpoint, political and economic institutions are interdependent in each and every country. When the two are stable, there is a positive correlation: a strong democratic political system favours economic growth, which, in turn, translates into political advances and the expansion of citizenship.

In times of crises, however, the lack of balance in either one or both the dimensions will call for adjustments and reforms. If these are well conducted, the virtuous cycle will resume. Every crisis, therefore, contains in itself the seeds of progress. It can represent an inflexion point from which a given country can restart its trajectory at an even higher level.

In judging countries like Brazil and India, questions asked in the light of their history can provide more solid answers: how have these nations addressed their political and economic crises? Facing them responsibly or by hiding behind them? The answer is clear: throughout the 20th century, Brazil and India were confronted by serious institutional problems and displayed the necessary strength and wisdom to use them as opportunities to reinvent themselves and emerge stronger. I have no doubts that the current crisis that Brazil is facing will be overcome and conquered in the same way.

What in your reckoning are the growth areas between India and Brazil?
In 2018, Brazil and India will celebrate 70 years of the establishment of their diplomatic relations. If we look at the initial steps taken by the two countries in 1948 towards building a joint platform, we would conclude that we have evolved into a multifaceted and strategic partnership. Brazil and India cooperate closely at bilateral level as well as on multilateral fora, on the basis of a common global vision, shared democratic values and a commitment to foster economic growth with social inclusion for the welfare of the people of both the countries.

At the bilateral level, it’s possible to identify several promising areas of mutual interest, such as food processing and agribusiness; energy security; health, pharmaceuticals and access to medicinal products; information technologies; culture and sports; science and innovation; cyber security, space, defence; civil aviation and infrastructure. Some of these fields are already the subject of well-established cooperation programmes. Others still offer opportunities for being better explored. But they all have the potential to further deepen our relationship.

In the economic arena, Brazil and India have achievements to celebrate and challenges to overcome. Among the former, I would recall the conclusion of the negotiations of the India-Brazil Investment Cooperation and Facilitation Treaty, an extremely innovative bilateral framework devised to stimulate mutual direct investments. I have no doubt that this treaty—to be signed soon by both parties—can indeed constitute a model for other bilateral and multilateral investment schemes around the world.

In terms of challenges, the two sides urgently need to diversify their trade basket, currently focused on low value-added commodities. In order to attain this goal, a good initial opportunity would be the expansion of the India-MERCOSUR Preferential Trade Agreement (PTA). If concluded successfully, these negotiations would allow greater trade flows and improved market access.

India and Brazil intersect each other through many multilateral engagements. They are in IBSA, BRICS, BASIC besides UN bodies. What is the major learning from this intense engagement that has taken place past 15 odd years?
We have learned that Brazil and India have common interests, values and an important contribution to offer in the reform of global governance. Both are major developing countries, with a key role in the political stability and prosperity of their respective regions, and they should be actively involved in redefining political institutions, such as the UN Security Council and the international financial system. Interestingly, India and Brazil’s engagement on multilateral forums was not reflected with equal intensity on bilateral platforms. There is huge potential in areas such as agriculture, trade, energy, defence, space cooperation, education and sustainable development. It has been said that Latin America is the last frontier of Indian foreign policy, and the long history of their bilateral relations recommends Brazil as India’s preferred partner in the region.

Post-2008, Brazil and India were seen as drivers of world growth. BRICS was conceived as a group to explain how these countries located in different geographies would revive recession-wracked economies. Out of this group, only China seems to have fulfilled expectations, while other countries are faltering. What has gone wrong?
There are different reasons for the difficulties that each country has faced in the recent years. In the case of Brazil, the adverse situation resulted from a combination of falling commodity prices—which in turn was partly a consequence of the slowdown in China’s demand—and an imbalance in public accounts. We faced rising unemployment, falling tax revenues and declining investment. Nevertheless, for Brazil, the crisis did not mean paralysis. Changes in economic policy and the adoption of a broad reform programme, in areas such as labour relations and the social security system, have allowed us to foresee a strong recovery in the near future. Signs of recovery are already visible: in the first quarter of the year, the economy has started to grow again, and the inflation rate in the last 12 months has dipped to only 3 percent. In the words of our Minister of Foreign Affairs, Mr Aloysio Nunes, Brazil is back in the game.

With much fanfare, India, Brazil and South Africa (IBSA)—all democracies—were created. Over the past few years, it has lost its way. What's your view? Why has it been devalued and do you think it still has any purpose?
The creation of the IBSA Dialogue Forum was one of the greatest innovations in international politics in the early 21st century. The trilateral forum played a key role in demonstrating the relevance and viability of South-South cooperation and helped reshape the understanding of the role that emerging countries can play and how they can act together effectively to advance a principled, common vision. In this manner, IBSA paved the way for other inter-regional initiatives connecting Asia, Africa and South America. But although it now shares the spotlight with other mechanisms, the trilateral forum retains its unique identity and can import unique contributions, in areas such as sustainable development, peace and security, the promotion of inclusive growth, among other key topics of the international agenda. In addition, IBSA provides a valuable, multifaceted framework for strengthening the ties between three vibrant and diverse democracies of the developing world, and continues to disseminate the developmental experience of its members for inclusive and sustainable growth, especially through the IBSA Fund for Alleviation of Poverty and Hunger.

Post US President Donald Trump's withdrawal from Paris climate deal, what is Brazil's stand?
Brazil remains fully committed to the implementation of the Paris Agreement and to the global effort against climate change. We consider that the fight against climate change is an irreversible process that cannot be postponed. It provides opportunities to promote sustainable development and foster sectors of cutting-edge technology. The Brazilian Government will continue to work with all the countries that are parties to the agreement in the promotion of sustainable development, with low emissions of greenhouse gases and resilience to the adverse effects of climate change.

Culturally, India and Brazil have so much in common, but the growth in the relationship has not kept its pace with initial expectations. Are you satisfied?
Brazil and India are multicultural, multireligious and democratic nations with a long-standing and fruitful friendship that encompasses several modalities of interaction and cooperation. Our relationship has never failed to show its strength and vigour, not only within important multilateral negotiations (climate change, BRICS, etc) but also bilaterally as the continuous dialogue and exchange of visits demonstrate. As in all relationships, there is always room for enhancement as the years pass by. One common goal is to reduce the inherent geographic distance between Brazil and India through the expansion of real people-to-people contact. I believe we should and will have more Indians visiting Brazil, more Brazilians visiting India in the near future either for business or for pleasure. Yoga, music, cinema, dance, football, and many other cultural expressions for which we share enthusiasm are central to this aspiration.

Has your country offered to improve India's football standards?
The warm reception granted by Indians to Brazilian football is one of my dearest memories from when I first got to New Delhi. Different people in different contexts and places have shown their passion and knowledge about our “Seleção Canarinho,” even naming some of our athletes from the past. We appreciate all the efforts in place in India to promote football as a national sport and also for hosting FIFA Under-17 Tournament in October 2017. Brazil will be playing in Kochi for the Group D classificatory turns and I hope we will have a final India vs Brazil in Kolkata on the 28th. Brazilian coaches and players have been visiting India for many years now and have trained alongside Goan, Delhites, Maharashtrian and other athletes, with the common aim of improving football standards. Such shared goal presents many opportunities to further cooperation which shall also be pursued through workshops, missions and outreach campaigns in schools.