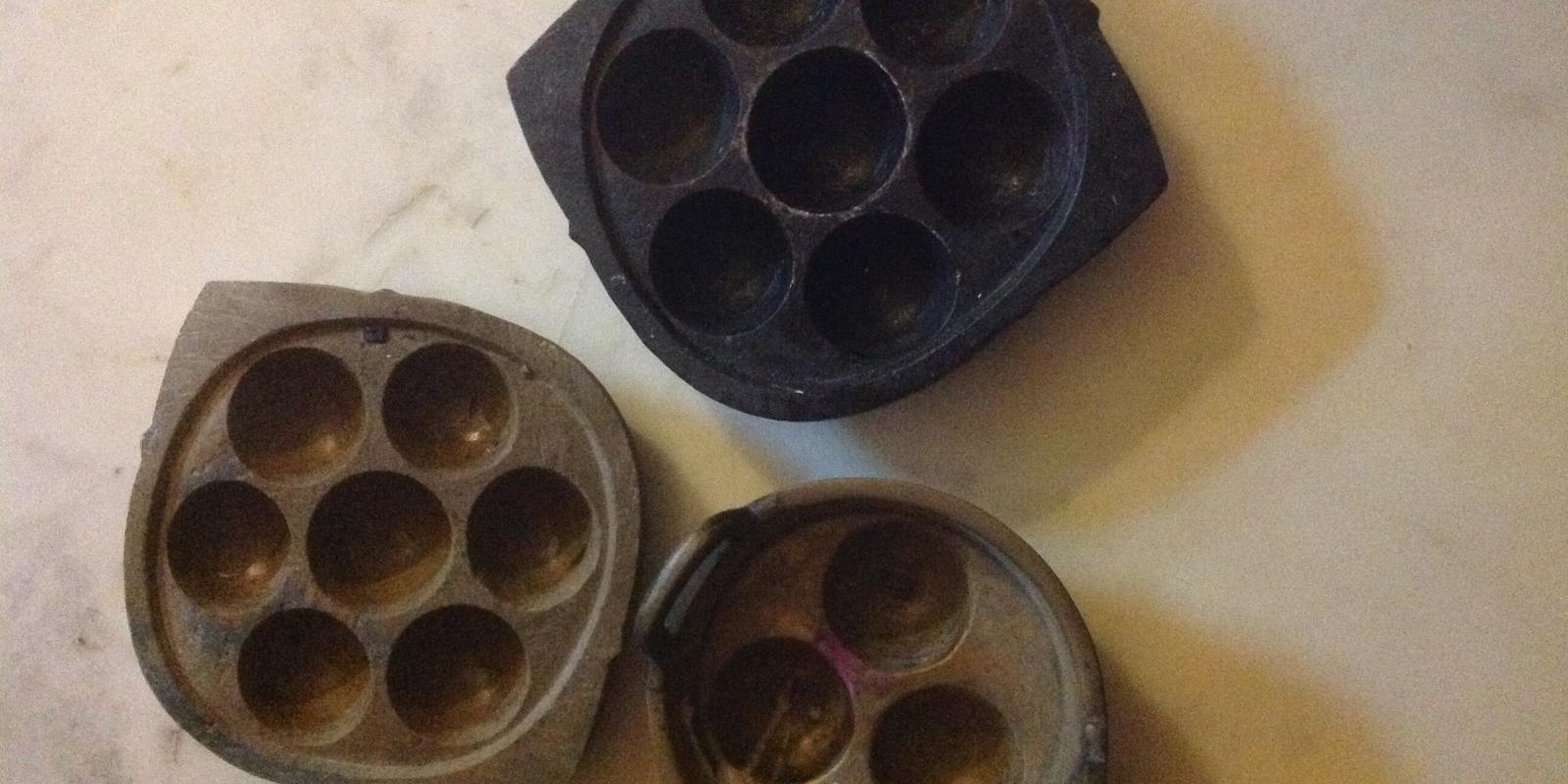 We followed our parents around the main shrines. In the heart of dark temples, lit by lamps and framed against granite walls, stone idols dressed in silks reigned over small inner sanctums. After the archanai (offering) was done, the deeparadanai, a flaming plate of fire–orange incense, was proffered. Kumkum, vibhuti and the occasional snippet of woven flowers would be distributed while the faithful were guaranteed benefactions by officiating priests, who speedily capped bowed heads with hallowed silver crowns, before moving on to other duties.

Eventually, our circumambulations, from the sanctum enclosing the main shrine, led in the direction of the prasadam at the far end. Someone in charge of the special kitchen wherein food was cooked for the gods, sat before the large bowl of prasadam that could take any shape. There would be crisp, flattened ulundu vadai, strung into a garland through hollowed out centres that were preferred by the monkey god, or tamarind rice, curd rice or the fragrant sakarapongal (rice and jaggery pudding).

Food historians mention that paniyarams, made of millet flour and jaggery were popular foods, greatly relished by kings in the Sangam period.

On special days we received warm, spherical appams that were dropped into our outstretched, cupped palms. Childhood memories are replete with the fragrance of soft, plump appams made of jaggery and rice flour, kneaded with bananas and laced with ghee, coconut slivers and crushed cardamom that were ceremonially handed out and received with joy. We headed homewards, clutching these treasures while nibbling slowly on them. 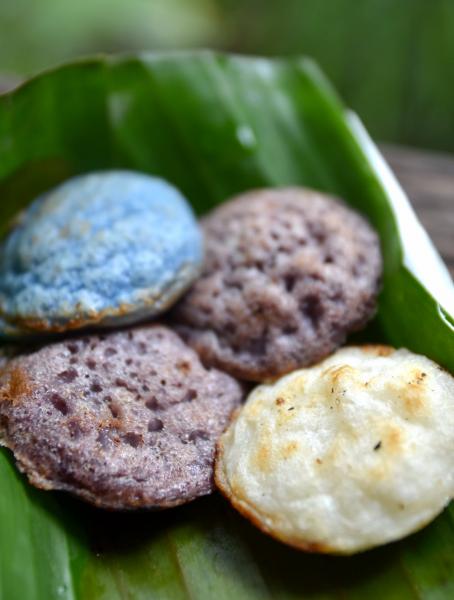 Appams were made in special vessels as ceremonial offerings to patriarchal deities ruling sundry households, although they were actually consumed in their entirety by the inmates of the house. On the festive occasions of Janamashtami, Kartikai and whenever the annual thread ceremony ritual day of Avani-Ayittam arrived, every household made appams (not to be confused with the rice aappams, which are lacy crepes with thick succulent centres, distinguished by the stretched double “a’ syllable).

Long before we heard of banana bread, we loved uniappams or naiappams, sweet dumplings deep fried in ghee, moist, succulent and special foods, infused with flavour and promising comfort. My mother, married off at eighteen, shifted shortly after to New Delhi and made naiappams on a special stone vessel called the kuzhi appakaral, an unusual frying pan. The “kuzhi-appakaaral” qualifies without exception as the most remarkable kitchen utensil ever made in the history of implements in the East and put to the most salubrious of uses. It is a circular mould inset with half -spherical cups. Possibly, the kaarals chiselled in stone date back to the Stone Age.

Food historians mention that paniyarams, made of millet flour and jaggery were popular foods, greatly relished by kings in the Sangam period. However, the appakaarals that I encountered were made of bell metal and iron, part of dowries handed over on the occasion of the daughter’s marriage, along with the family appam recipe and would have been made approximately eighty years ago. Possibly, the crafters of this gorgeous ‘appam ware’ in bell metal and iron belonged to Kerala and Tamil Nadu.

My mother–in-law, whose natal home was at Palashena in the Palakkad district of Kerala owned appakarals made of bell metal and iron, which she too brought all the way to New Delhi. She made delicious sweet appams and also introduced me to the joy of savoury dumplings -- these were called uppu-appams and were often made for breakfast or at teatime without any ritual or religious promptings whatsoever. In fact, in rainy and cold weather, these dumplings, made from fermented dosa batter mixed with a little wheat flour, pepper grounds, asafoetida, chopped green chillies and ginger were perennial favourites.

The primary requirement -- dosa batter -- is manufactured in South Indian kitchens at least once a week. Over the years, I have compiled my own repertoire of garnishes such as grated carrot, minced onion, cabbage, drumstick leaves, chopped peanut and spinach. Meanwhile I also discovered that paniyarams as they are officially termed in Tamil were known as paddu in Kannada and gunta ponganalu in Telugu, and were extremely popular in different parts of South India.

Indonesia has a sweet dumpling version called piniyaram, which may have inspired the Tamil paniyaram during the trading maritime centuries.

There is also a range of dumplings sweet and savoury that can be found today in different Asian countries, that speak of connections and links forged in history. Indonesia has a sweet dumpling version called piniyaram, which may have inspired the Tamil paniyaram during the trading maritime centuries. Thailand’s khanom khrok is supposed to have been drawn from Indonesian traditions. Travelling friends sent me pictures of similar looking dumplings that they saw at wayside eateries in Cambodia. Salted fried dumplings, the Japanese takoyaki are made of wheat flour and have all kinds of fillings ranging from octopus to shredded ginger. In North and South Vietnam they make banhs, sweet fried versions using rice flour and different stuffing. 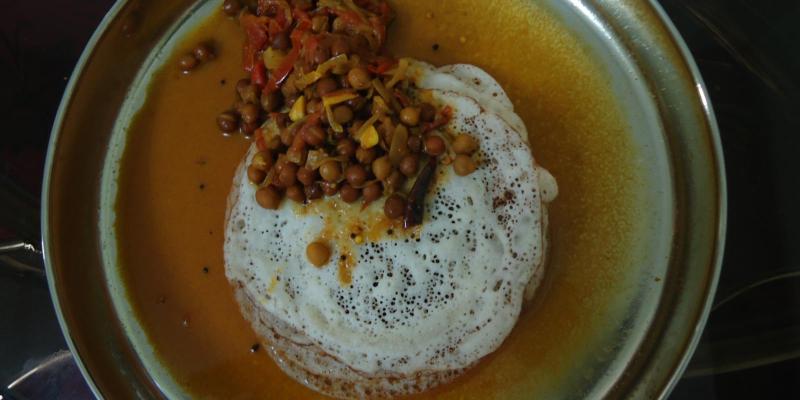 Why, a visiting friend mentioned being served snails or escargots cooked in butter in an indented pan at a restaurant in France. The Dutch poffertjes (doughnut) and the Danish AEbelskivers (sugar dusted pancakes) are made in indented iron pans, shaped quite like the Indian appakaarals or kuzhi-paniyaram pans. Possibly these pans found their way into the West as a result of colonial exchange and assimilation.

A recent trip to Tamil Nadu included a visit to Dakshin Chitra, a showcased heritage village, which houses wooden homes relocated in their entirety from Andhra, Tamil Nadu, Karnataka and Kerala. The shop at Dakshin Chitra houses appakaarals chiselled in soapstone, exotic cookware in these days of aluminium and non-stick kuzhi-appam pans. Dakshin Chitra’s stone kuzhi-appakaaral is a bluish green stone pan, which has hollowed out half sphere shapes on a single flat bottomed slab.

I brought one home and tempered it, greasing it with generous helpings of gingelly oil which the stone drank up over a few days. This was followed up by pouring in rounds of warm water drained from cooked rice. Eventually the stone was placed on a gas fire and the rice water was allowed to warm. In the next few rounds the starchy rice water is allowed to boil awhile. The stone is allowed to rest and when it cools, it is scrubbed with rice powder and rinsed. Once dry, it can be greased again with oil and is then ready to begin its journey as chef de mission for a range of delicious roasted foods.

Making paniyarams on a stone slab allows one to learn new things about the properties of oil, stone and flame. Fabulous appams, both sweet and savoury with flours of rice and wheat and all kinds of millets, including coarse corn, with additions of roasted lentils and grated vegetables can be made in the kuzhii appakaarals. The green blue soapstone browns and darkens with the oil and heat. A little greasing of the cups enables the making of delicious paniyarams for breakfast, lunch and dinner.

Koftas, aloo bondas, kadi pakoras can be made in this versatile vessel, with minimal oil. Par boiled potatoes with skin, fork pricked tomatoes and brinjal, lend themselves to grilling in the compact half-spheres. Eggs made in the kuzhis are light and flavourful, as the egg surface is aerated, once freed from the confines of the shell casing. Crack an egg and drop it into the open cup, keeping the yolk intact. Chopped coriander, green chilli and salt can be sprinkled atop. Egg white spill over, if any, can be folded back into the body of the egg. Turn the egg over with a small spoon allowing it to brown evenly on all sides. Serve hot with toast or without. If you want your yolk runny, scoop out gently out with a soup spoon.

Another delightful aspect of this slow-food making experience is that very little oil is consumed. No oil is left over at the end of cooking to be stored and recycled as is often the case when foods are fried. This is a minimalist form of frying, that segues effortlessly into new age cooking – all thanks to this wondrous twenty-first century akshaya-patra of ancient lineage.