‘Beefing’ up to counter food propaganda 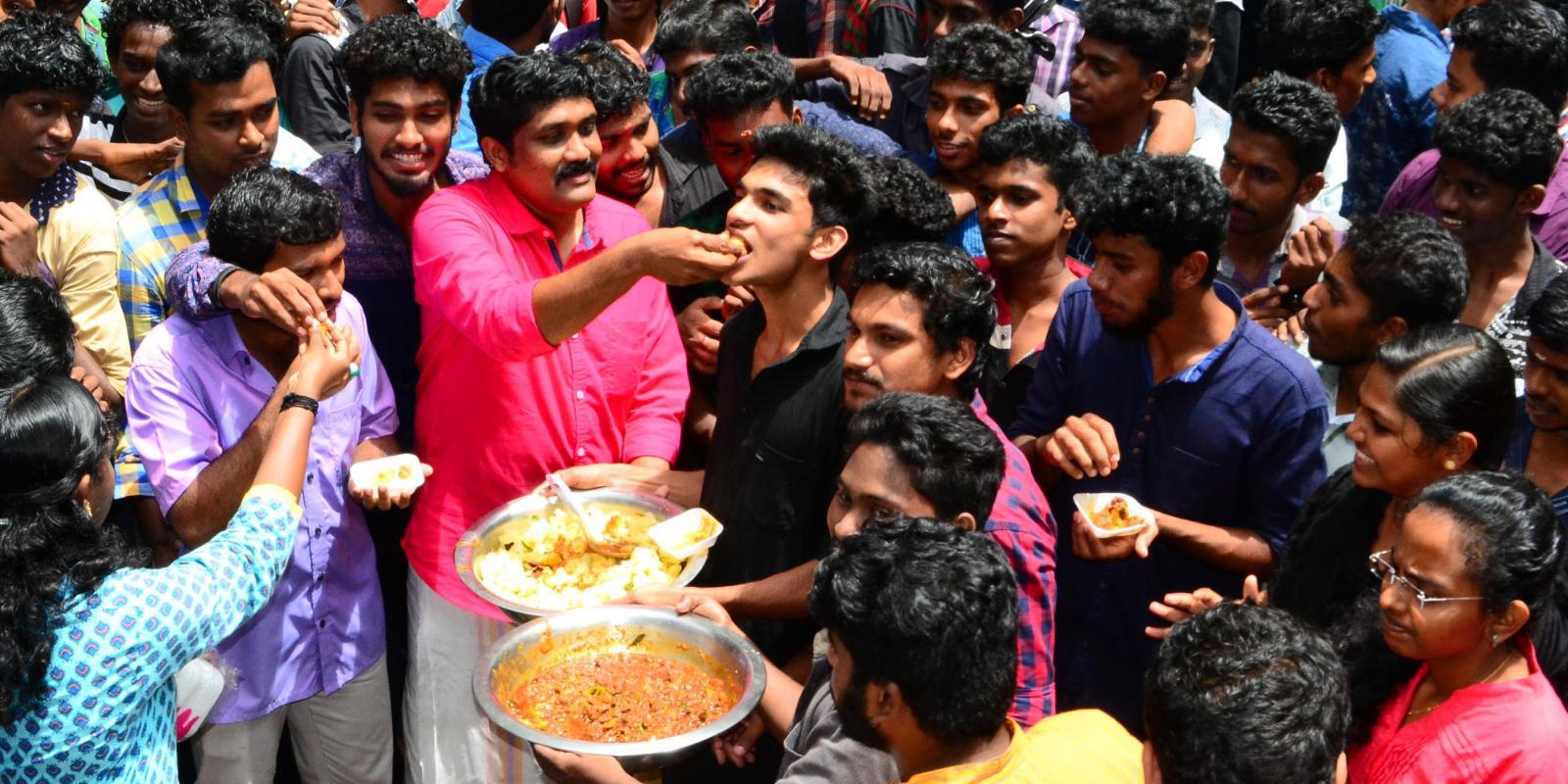 To stem a rising wave of vegetarianism sweeping north and west India, several individuals and organisations are working to develop a counter-narrative

Three years ago, Balakumar Somu, an activist, started a low-decibel campaign to promote meat eating in Coimbatore, which is about 500 km from Chennai. It’s an important border town just three hours from Kerala, thereby attracting a sizeable migrant, beef- and pork-eating population from the state. Somu doesn’t believe in holding meat-eating festivals, as “it leads to failure”. “Our campaign is more at the micro level, at schools, colleges and Lions Clubs and so on, where we tell participants the benefits of meat eating,” he says. Till date, his organisation (Activists for Righteous Harmony of Animals Movement) has conducted 40 gatherings attended by up to 200 people in Lions Clubs and up to 500 children in schools.

From organising photo exhibitions to symposiums and talk shows, Somu’s team illustrates the harmful effects of vegan and vegetarianism. They stress that India continues to battle protein deficiency (almost 73 percent of Indian diets are protein deficient). Now, they are upping the stakes, promoting public animal sacrifices of goats and country chicken. It appears there is a revival of this practice. “There is a get-together and the community partakes of the freshly cooked meat. This is not barbarism. We are going back to our roots. And in any case, it’s much better to have freshly-cooked meat than opt for processed cut meats from retail shelves,” justifies Somu.

Back in Chennai, Himakiran, joint secretary of the Senaapathy Kangayam Cattle Research Foundation, is in the process of curating a traditional meat food exposition of Tamil Nadu.  Among other things, the display will include live cooking counters and sampling, display and sale of cold cuts. “While Chettinad food (from Sivagangai) and Dindigul brown rice biryani are famous, we plan to showcase other local food like fish fry from Madurai and Suvarotti, a barbeque made from the goat’s spleen. The beauty of Madurai fish fry is that the fish comes from local tanks and ponds, and not rivers and the sea, so its taste is different,” says Himakiran.

Kerala’s protest against the nationwide attack on beef consumption got stronger this year, with beef fests being held across the region last year, including the public slaughter of a cow. Kerala has a reputation of being communally one of the most tolerant states in India. While a majority of Kerala’s population is Hindu (54.72 percent), Muslims and Christians constitute 45 percent.

Both these initiatives highlight moves to stem a rising wave of vegetarianism that is sweeping across north and west India. Actively encouraged by the ruling BJP, State-sponsored vegetarianism is gaining ground across the country. For instance, State-owned carrier Air India now offers only a vegetarian menu for its passengers in economy class. Similarly, meat was struck off the lunch and dinner menus on the first day of the IAS (Indian Administrative Service) week which was recently marked in Uttar Pradesh’s capital, Lucknow. What’s keeping the green brigade ticking is that figures from the sample registration system (SRS) baseline survey 2014 have revealed that meat eating has dropped from 75 percent to 71 percent between 2004 and 2014.

Obviously, the strongest reaction to all of this comes from those who have the most to lose – the southern states, large populations across India’s long coastal belt, and the North-east. Across these states, there is an assertion of the right to eat food of one’s choice. Over the past three years, the fiercest battle over food has been fought in key beef-eating states – Kerala, Goa, West Bengal, and the North-east. But after the Narendra Modi government’s notification last May to ban the sale and purchase of cattle from animal markets for slaughter – which it subsequently withdrew after massive protests and legal queries – the stakes have increased.

It’s clear that religion is driving the Modi government’s pro-vegetarian stance. “What we can surmise is that anti-Muslim sentiment is greater in the north and west than in the south. To the extent that Muslims are associated with beef consumption, we find a ready acceptance of the ban here,” says Deepak Mehta, professor and head of department, sociology, Shiv Nadar University.

Kerala’s protest against the nationwide attack on beef consumption got stronger this year, with beef fests being held across the region last year, including the public slaughter of a cow. Kerala has a reputation of being communally one of the most tolerant states in India. While a majority of Kerala’s population is Hindu (54.72 percent), Muslims and Christians constitute 45 percent. “Meat is a staple in Syrian Christian households. Meat cutlets (made of minced beef and chicken) and fried fish are consumed daily in many homes,” says Achu Kurian, author of Cakes, Desserts and more. Sociologists state that meat eating in public places should not be seen as a backlash to state-sponsored vegetarianism. “It should be seen positively as a mode of assertion, especially in public places like university canteens where till now meat was served but never beef,” says Amita Baviskar, professor, Institute of Economic Growth, New Delhi. Similarly, in Goa, the powerful restaurant lobby made its displeasure known to the ruling BJP government, forcing a public clarification by the chief minister that there would be no ban on beef consumption in the state. After New Year’s, news reports stated that the Goa Meat Traders Association, an umbrella body that supplies meat across tourist spots, hotels and households in Goa, will be on indefinite strike till the state intervenes to check vigilantism in the “name of beef.” But activists assert that state-sponsored vegetarianism will not work in Goa. “The Christian community is very vociferous in the region. Their vote share is around 27 percent and if they want the votes, the government will not embark on a state-sponsored vegetarianism drive.,” IT professional and activist from Goa, Samir Kelekar told Hardnews.

hotspots are West Bengal and the North-east, where there are reports of increased vigilantism against any form of imposed vegetarianism. Last year, the Assam government was forced to withdraw a meat sale ban at its Namami Brahmaputra festival in Guwahati. Political and social observer Navanil Baruah then told an online news website, “Assam has a large population of tribals and they are essentially meat eaters. Even the Brahmins of Assam are meat and fish eaters, unlike their counterparts in North India. In a revered place and pride of Assam like the Kamakhya temple, meat is allowed. Even buffaloes are sacrificed there.”

Take a look at the meat map of India — if numbers are any indication (see graphic), it’s a greener north and redder south. Over 95 percent of the population of the four large southern states eats meat. Karnataka is the only outlier, but even here the meat- and egg-eating population is a respectable 78 percent. That’s why experts say it’s dangerous to stereotype regions and communities across red and green lines (vegetarian and non-vegetarian). “Think Mylapore or Triplicane in Chennai and the imagery that comes to mind is Iyer and Iyengar Brahmins; filter coffee, pongal and Thayirsadam (curd rice). These are tiny areas, but they too have a sizeable Muslim population. During Ramzan, Triplicane becomes a meat eater’s paradise. Brahmins and Muslims have co-existed in this region for many years,” says Rakesh Raghunathan of Puliyogare Travels.

Moreover, unlike up north, the meat industry down south and in coastal India is far more organised. Pioneers include Sugana Chicken, a Rs 5,830-crore broiler company which started operations 25 years ago in Coimbatore. Today, it ranks among the top 10 poultry companies worldwide and has a network of 30,000 farmers across 8,000 villages in 18 Indian states. Rising incomes levels coupled with health consciousness are putting people on the lookout for a protein-based diet in place of one filled with carbs. According to Nishanth Chandran, founder and chief executive officer, TenderCuts, a two-year-old start-up that specialises in farm-fresh meats: “Young IT professionals who have travelled across the globe prefer the western diet of one piece of protein followed by a main course of rice or pasta.”

At the end of the day, the fact that this is a deeply political issue hasn’t been lost on observers. “Thanks to Periyar, we understand how the Brahmin hegemony works and how to counter it. These beef bans are a part of their larger agenda of Hindi Hindutva. Tamil Nadu, which has always countered this hegemony, will lead the protests,” says Puli Arasan, a fitness coach and advocate of beef and pork consumption. This call to arms reminds one of the anti-Hindi movements in Tamil Nadu in the 1950s and ’60s. Increasingly, more people are questioning the narrative that vegetarianism is a morally upright and superior alternative and asserting their right to local food diversity. This is going to get uglier.