Journalists defend the right to report 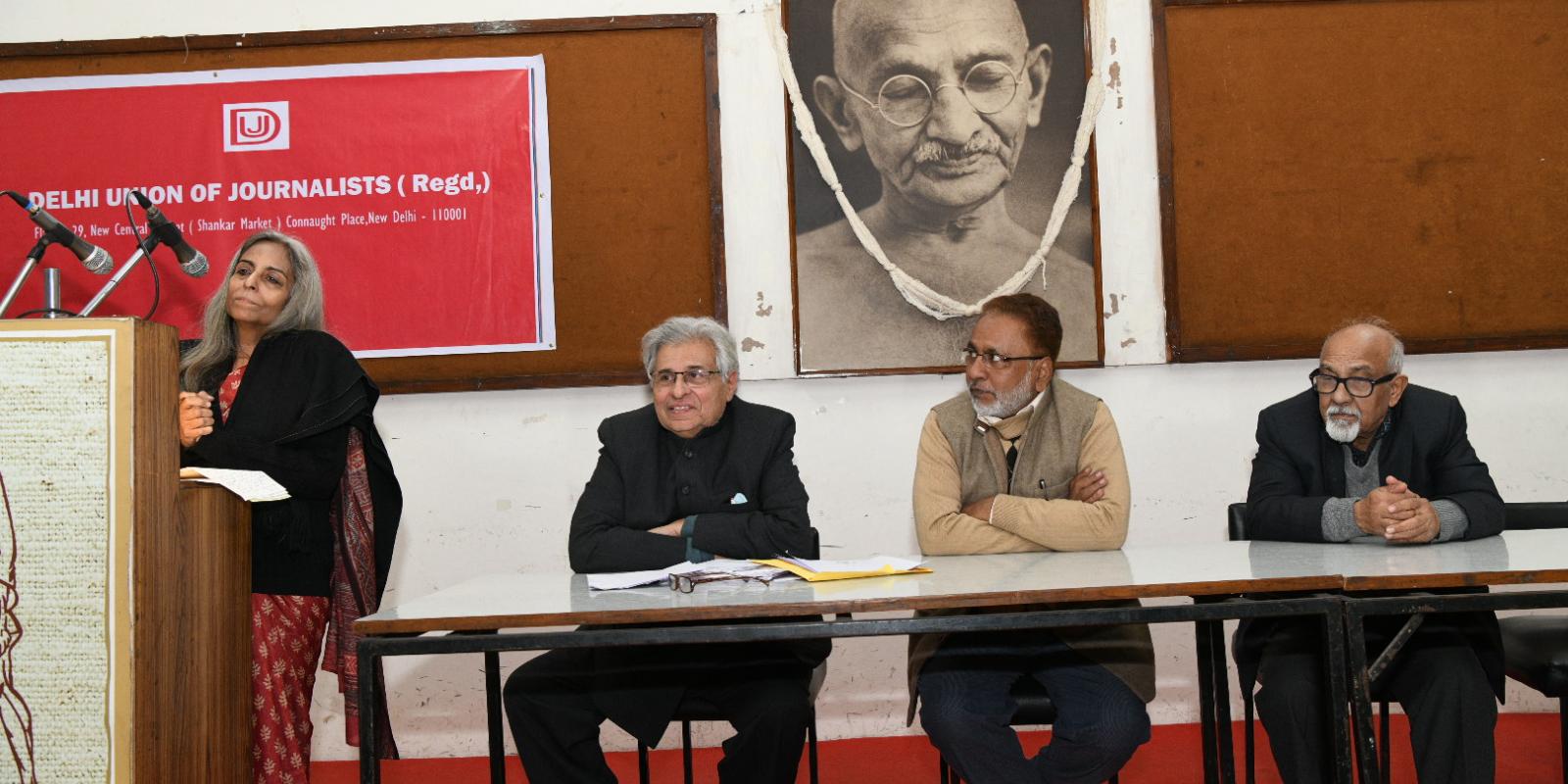 A remarkable speech defending the freedom of expression by Tribune editor Harish Khare kicked off Delhi Union of Journalists' meeting on “The Right to Investigate – UIDAI vs The Tribune” held on January 10 at the Gandhi Peace Foundation. The speech was in the context of the filing of an FIR by the UIDAI against the newspaper and its reporter Rachna Khaira for exposing leaks in the Aadhar system. Chandigarh-based Khare’s speech was read out by Delhi bureau chief Prasad to an appreciative audience.

Khare’s ironic address says that The Tribune was only doing “a spot of old, honest, legitimate investigative reporting,” “a bit of old-fashioned journalism.”  “We need to be thankful to the authorities for throwing the harsh provisions of the law at us because suddenly it was evident to one and all – from the most pro-government to the most professionally detached media outlets – that the sub-inspector can come calling on anyone of us, whatever be the colour of our partisanship,” he says (see the DUJ Facebook page for the entire speech).

Welcoming DUJ members and honoured guests, DUJ President S.K. Pande said the union had felt impelled to call a protest meeting at short notice on this urgent matter. He called upon all journalists to unite to defend themselves from such attacks on our right to investigate and report freely and fearlessly and to be on guard against increasing shadows of Emergency and unity busters. We demand the withdrawal of FIR against the investigative journalist and phased action on common issues.

Siddharth Varadarajan, editor of The Wire, observed that India is witnessing an all-out assault on the media freedom and the Constitution itself. He said as journalists, we are custodians of the citizens’ right to know; it is our responsibility to defend this right. He cited the many recent attacks on journalists like Gauri Lankesh and Santanu Bhowmik among others and the arrests and driving out of journalists from Chhattisgarh, particularly Dantewada. He said while governments are abusing various laws to target journalists, private corporations are misusing the civil defamation law to file frivolous cases. The use of SLAPP suits is becoming routine, e.g. the 500 crore defamation suit against Josy Joseph. He referred to the misuse of the CBI as in the raid on the home of Prannoy and Radhika Roy of NDTV. He said while the Supreme Court rightly struck down S. 66 A of the IT Act to prevent arrest for social media posts, others sections of the Act such as S. 67 are being widely misused by the police.

The numerous attacks on the media, starting with the use of an abusive term like ‘presstitute' by a minister, shows that the government wants to completely control the media and crumble all resistance to its policies. He urged all those present at the meeting to follow the example of Gandhi who, he pointed out, was an excellent reporter and journalist. “We must all stand collectively and resist wherever we can,” he urged.

Varadarajan called the action against The Tribune vindictive and asked why numerous leaks of Aadhaar data by government websites have gone unpunished. He pointed out that a vast array of business persons is using this data but none of them has been investigated.

Advocate Mehmood Pracha said The Tribune reporter has done a commendable job in reporting the leaks and the charges against her cannot be sustained in any court of law. He said the way the Aadhar scheme is being implemented is in direct contravention of the provisions of the Aadhaar Act itself. The preamble of the Aadhar Act makes it clear that it is meant only for government’s beneficial schemes, he pointed out. He cited sections of the Act including S.3 which says a citizen is ‘entitled to obtain’ an identity card but does not make it mandatory, as the government insists. He said the Aadhaar process is illegal and fraudulent, a money-spinning scheme with Rs 1 lakh crore of taxpayers’ money already milked through it and more money being made. He said that while today the government is insisting on biometric data, tomorrow it may demand more, even ask for our genome!  The entire Aadhaar Act must go, he declared. 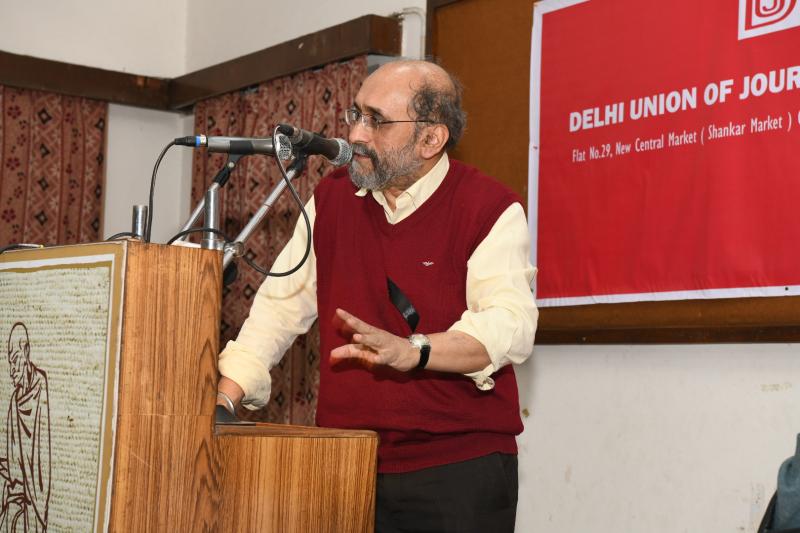 Paranjoy Guha Thakurta, a former editor of the Economic & Political Weekly, put the issue in the global context saying that Aadhar is a mass surveillance tool. Globally, technology is being misused for such purposes as there is today enough server space in the world to record details of every individual on the planet as well as their activities. Orwell’s Big Brother is real, he warned. He pointed out that drones flying overhead have the capacity to snoop on all activity even in closed rooms!  He said our dependence on technology is growing rapidly, with reports that soon Facebook alone may have 40 percent of the planet’s people on it! Civil society has to find ways to protect itself, methods to protect our children and their children from such surveillance, he observed.

Veteran journalist Sukumar Muralidharan said we are witnessing an enormous crackdown on the public’s right to know and on creative expression. He cited numerous examples of attacks on writers like M.M. Kalburgi, the censorship of many films including a documentary on Nobel Laureate Amartya Sen and a Gujarat ban on an Amir Khan film as examples of the policing of public dialogue and discourse.  He referred to a Supreme Court judgement in the Rangarajan vs Jagjivan Ram case which clearly says that there can only be reasonable restrictions on free speech and outlined what such reasonable restrictions could be. Despite these safeguards, he warned, we are rapidly going into a zone of darkness, he warned. The optimism about the democratising aspects of the social media may be unwarranted, he said, pointing out the rampant misuse of Whatsapp to incite lynchings in Jharkhand and ‘showcase’ the gruesome killing of a Muslim man in Rajasthan.

Commending The Tribune reporter’s story, the editor of Hardnews Sanjay Kapoor said it is amazing how much traction a district reporter’s story can get if it is a real expose. He said the sanctity of such reporting has to be protected, particularly as there is too much analysis and not enough reporting today. He regretted that in the current political climate every policy of the state has to be supported and those who question it are labelled anti-national. He called upon unions like the DUJ to rebuild solidarity among journalists and defend the right to write and report freely.

Veteran journalist Dr Satish Mishra said the FIR against The Tribune was one incident but there is a pattern to it. The numerous attacks on the media, starting with the use of an abusive term like ‘presstitute' by a minister, shows that the government wants to completely control the media and crumble all resistance to its policies. He urged all those present at the meeting to follow the example of Gandhi who, he pointed out, was an excellent reporter and journalist. “We must all stand collectively and resist wherever we can,” he urged. 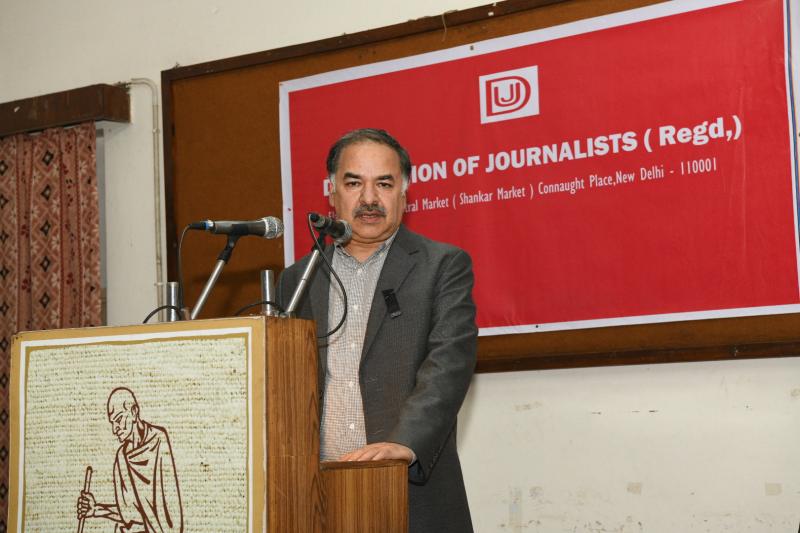 Masoom Moradabadi, a veteran Urdu journalist, echoing the need to dissent read out a poem by Faiz Ahmed Faiz on the citizen and the poet’s right to speak up against all oppression.

W. Chandrakant of the National Alliance of Journalists warned that there could be many more attacks on media in the future and said there is an urgent need to build solidarity among journalists. He said the NAJ has already organised several states and over 5000 journalists to come together and defend ourselves.

Sujata Madhok, General Secretary of the DUJ made the concluding remarks. She said that the ‘Swachh Bharat Abhiyan’ in its ‘clean up’ of the nation has included a crackdown on small newspapers and the withdrawal of government advertising to them, forcing many to close down.  This has rendered a large number of journalists unemployed. She warned that according to a recent speech by minister Rajyavardhan Rathore, the government’s next focus is persons carrying press IDs, as many people are misusing such cards. If this is done, she pointed out, many more journalists, particularly freelancers and stringers and those working for websites, will lose access to their sources and to their work. She called for solidarity to oppose such measures that will add to the growing pool of unemployed media workers.

The meeting received solidarity messages from the president of All India Newspaper Employees Federation (AINEF) SD Thakur and called for the withdrawal of FIR against The Tribune journalist. Solidarity action pledges were received from the National Alliance of Journalists units in Andhra, Telangana and Madhya Pradesh.

Even as the meeting was in progress, the Centre of Trade Union’s general secretary Tapan Sen sent a press release of solidarity. He denounced the vindictive action against the journalist for bravely exposing the systemic fault in Aadhar. Similar messages were received from the All India Lawyers Union and a brief condemnation of the vindictive action against The Tribune reporter by senior Supreme Court advocate Rajeev Dhavan.