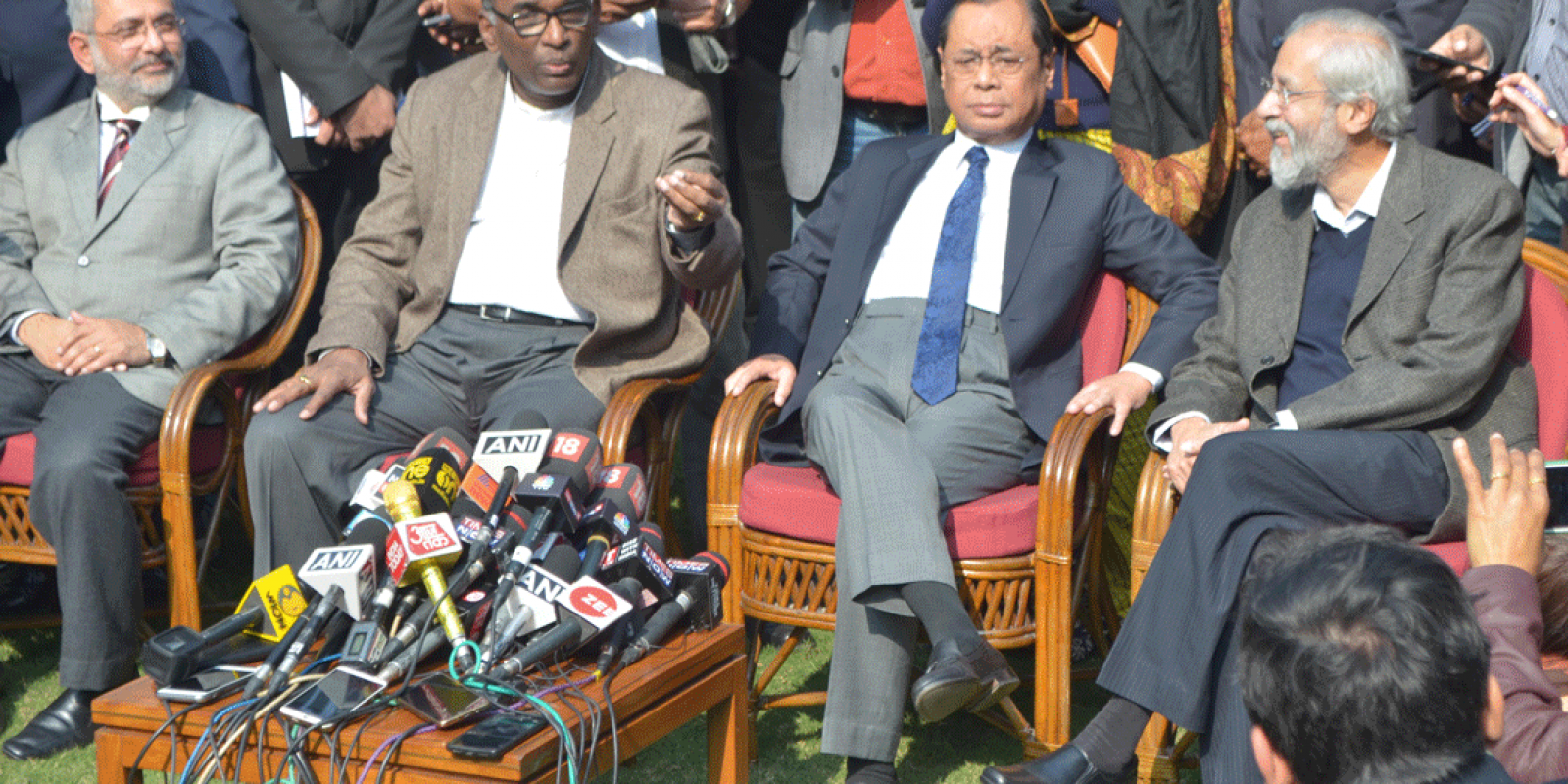 In an unprecedented move, four judges of the Supreme Court of India raised their grave concerns about the state of judiciary and through it democracy in India

Justice Kurian Joseph, J Chelameswar, Ranjan Gogoi and Madan B Lokur, all senior judges of the Supreme Court and members of the collegium of Chief Justice of India, Deepak Mishra, spoke to the media at a press conference in New Delhi on January 12. The press conference was called by the four judges of the Supreme Court, with the express purpose to voice their misgivings about the administration in the apex court and put across their side.

Addressing to the reporters, Justice J Chelameswar said, “We met the Chief Justice of India (CJI) with a specific request which unfortunately couldn't convince him that we were right. Therefore, we were left with no choice except to communicate it to the nation that please take care of the institution. We wanted a particular thing to be done in a particular manner. It was done in such a way that it raised further doubt about the integrity of the institution."

According to the four judges said they had met the CJI a few months ago with the same issue but to no avail. “In the future, twenty years on, we four judges, don't want to be accused as those who 'sold our souls,' we have a duty towards the people of the country. They maintained that it was their duty and debt to the nation to bring this to the citizens’ attention. They were clear about the fact they were neither running for, or engaging in politics.

They said that the SC administration was not in order, and they have taken the step in to preserve the democracy.

The judges also released a copy of the letter highlighting their demands. "We are not breaking lines. This is our duty to the nation," Gogoi said.

It is with great anguish and concern that we have thought it proper to address this letter to you so as to highlight certain judicial orders passed by this court which has adversely affected the overall functioning of the justice delivery system and the independence of the High Courts besides impacting the administrative functioning of the office of the Honourable Chief Justice of India.

From the date of establishment of three chartered High Courts of Calcutta, Bombay and Madras, certain traditions and conventions in the judicial administration have been well established. The traditions were embraced by this court which came into existence almost a century after the above mentioned chartered High Courts. These traditions have their roots in the anglo-saxion jurisprudence and practice.

One of the well settled principles is that the Chief Justice is the master of the roster with a privilege to determine the roster, necessity in multi-numbered courts for an orderly transactions of business and appropriate arrangements with respect to matter with which member/Bench of this court (as the case may be) is required to deal with which case or class of cases is to be made. The convention of recognising the privilege of the Chief Justice to form the roster and assign cases to different members/benches of the court is a convention devised for a disciplined and efficient transaction of business of the court but no a recognition of any superior authority, legal or factual of the Chief Justice over his colleagues. It is too well settled in the jurisprudence of this country that the Chief Justice is only the first amongst the equals — nothing more or nothing less. In the matter of the determination of the roster there are well settled and time honoured conventions guiding the Chief Justice, be the conventions dealing with the strength of the Bench which is required to deal with a particular case or the composition thereof.

A necessary corollary to the above-mentioned principle is the member of any multi-numbered judicial body including this court would not arrogate to themselves the authority to deal with and pronounce upon matter which ought to be heard by appropriate benches, both composition wise and strength wise with due regard to the roster fixed.

Any departure from the above two rules would not only lead to unpleasant and undesirable consequences of creating doubt in the body politic about the integrity of the institution. Not to talk about the chaos that would result from such departure.

We are sorry to say that off late the twin rules mentioned above have not been strictly adhered to. There have been instances where case has far-reaching consequences for the nation and the institution had been assigned by the Chief Justice of this court selectively to the benches ‘of their presence’ with any rationable basis for such assignment. This must be quarded against at all costs.

We are not mentioning details only to avoid embarrassing the institution but note that such departures have already damaged the image of this institution of some extent.

In the above context, we deem it proper to address you presently with regard the order dated 27th October, 2017, in R B Luthra vs. Union of India to the effect that there should be no further delay in finalising the Memorandum of Procedure in the larger public interest. When the Memorandum of Procedure was a subject matter of a decision of a Constitution Bench of this court in Supreme Court Advocates-on-Record Association and Anr. vs Union of India, [(2016) 5 SCC 1] it is difficult to understand as to how any other bench could have dealt with the matter.

On 4th July,. 2017, a bench of seven judges of this court decided In Re Honourable Shri Justice C S Karnan [(2017) 1 SCC 1]. In that decision (referred to in R P Luthra) two of us observed that there is a need to revisit the process of appointment of judges and to set up a mechanism for corrective measures other than impeachment. No observation was made by any of the seven learned judges with regard to the Memorandum of Procedure.

Any issue with regard to the Memorandum of Procedure should be discussed in the Chief Justices’ conference and by the Full Court. Such a matter of great importance, if at all required to be taken on the judicial side, should be dealt with by none other than a Constitution Bench.

The above development must be viewed with serious concern. The Honourable Chief Justice of India is duty bound to rectify the situation and take appropriate remedial measures after a full discussion with the other members of the collegium and at a later stage, if required, with other Honourable Judges of this court.

Once the issue arising from the order dates 27th October, 2017, in R P Luthra vs Union of India, mentioned above, is adequately addressed by you and if it becomes so necessary, we will apprise you specifically of the other judicial orders passed by this court which would require to be similarly dealt with.