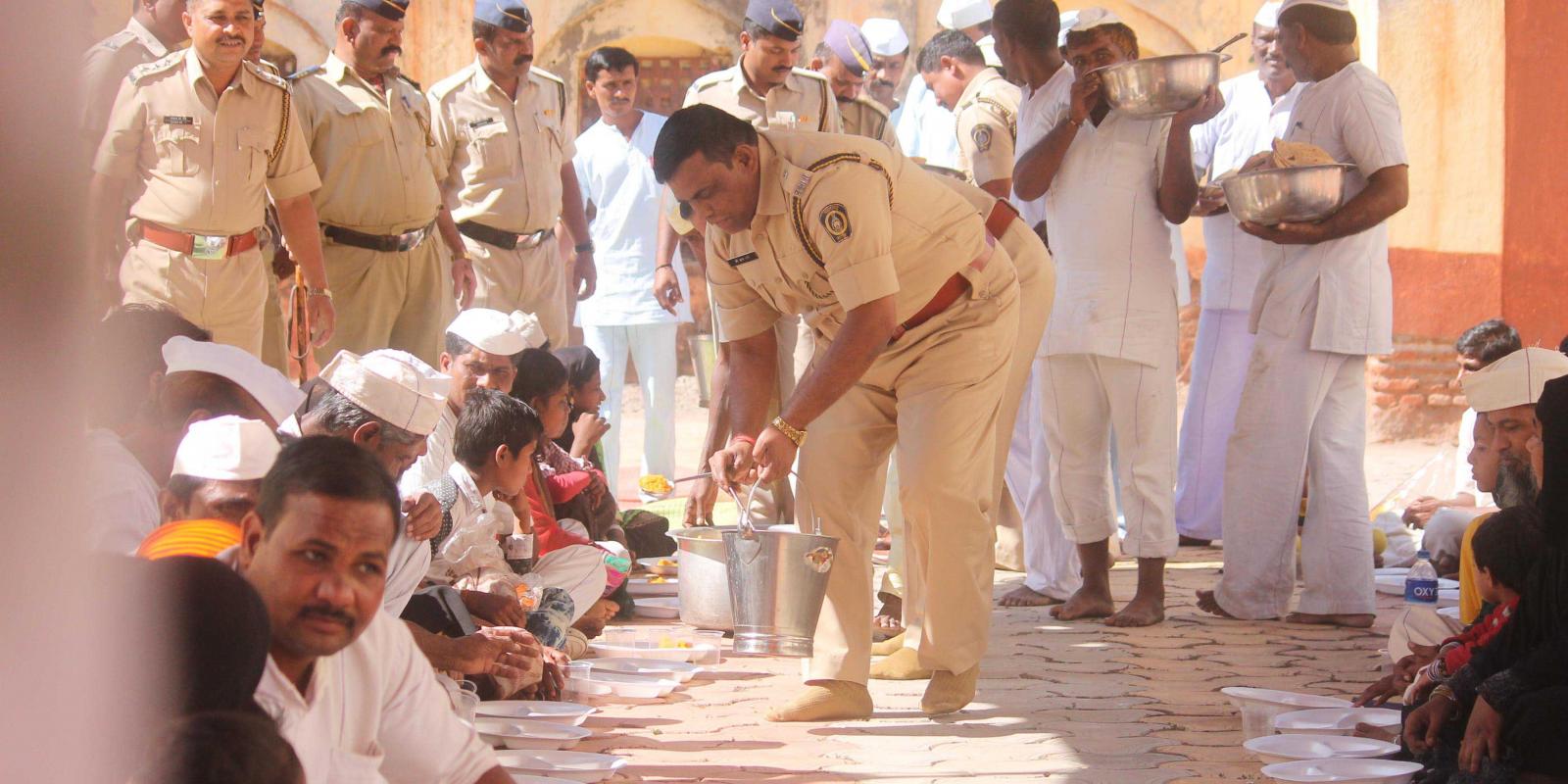 In the concluding part of this four-part series, Farooqui shows how in a cruel space like prison , theatre allowed its inhabitants to vent their feelings, sometimes find them and also sublimate their angst.

In the 14 months that I spent in Tihar after my conviction, I succeeded in doing four major plays and many minor ones, including some skits, apart from training some inmates in Dastangoi. None of this would have been possible without the support and active encouragement of the then Director General Sudhir Yadav. Yadav took a keen interest in the Drama Class and encouraged us at every step. After Court Martial, I also took up Habib Tanvir’s sadabahar hit Charandas Chor.

Tanvir had been a mentor of sorts to me and I had translated his autobiography into English before my incarceration. In emulation of the practice of his troupe, I had instituted Jai Shankar as the greeting for members of the Drama Class. The problem with Charandas Chor was that the two central characters are played by women. There were some talented women in the Ladies Jail No.6 at Tihar, as I had discovered when we performed there and later, during the course of the documentary that I made on Tihar while still an inmate. Yadav readily assented to the proposal to have some women participate in the play. However, in spite of his instructions, the superintendents of our jail and of the women’s jail were very reluctant. A few weeks before the play, a lady doctor, a rare psychiatrist, had been molested in our jail and to invite women inside meant incurring a risk. The ladies jail is, understandably, an object of great fascination for the male inmates.

After many hurdles and attempts, six women finally joined us just four days before the play. Their arrival created a stir in the entire jail. We had extra security deployed in the IGNOU ward and except for the drama class, the entire ward was evacuated. For the women, this was a short respite from the oppressive atmosphere of their jail. As you can imagine, their participation enhanced the glory of our production to no end. To rely on an Urdu phrase they added char chand to our play. There are many songs in Charandas Chor and I was delighted that our troupe acquitted itself honourably in both the acting and the singing departments. I had improvised a few scenes in the play which itself was borne out of improvisation by Chhattisgarhi Nacha performers. One of the scenes I added was a court scene where Charandas is given laughingly long court dates and forever denied bail. Naturally, this went down very well with inmates who had to spend their lives hoping for bail.

But the headache of getting women to perform was so severe that when I adapted one of Moliere’s plays, The Doctor Despite Himself, I had male actors, like Shakespeare and Parsi theatre style, play the female roles. It was fun to see male actors sizing up their ghaghra cholis, bras and makeup as if they had been doing it for years.

On Nelson Mandela’s birthday on 18th July, I put up a play on his life. For this, I had to collaborate with the Nigerians who are a regular in Tihar. They are mostly there for drug or passport fraud. The everyday racism they encounter is quite appalling and the sub-culture they have evolved in Tihar merits a long story to itself. Anyway, the Nigerians were a handful to deal with. They would turn up two hours late and unapologetically claim that this is Nigerian standard time. But when they understood that I was using Mandela to attack the racism that they experience in the present and to protest the negligence and the oppression of the prison regime, they became enthusiastic. I put up the entire play in a span of merely three days — an achievement I am very proud of. I also did several other short plays, including a Comedy Show on life inside Tihar and a few Dastangoi performances by inmates.

Our greatest reward came when after the festival’s successful conclusion, he allowed our families inside for a brief few hours. But the joy and memory of sharing a meal with one’s family in the relative quiet of a ward , in dignified surroundings, has enough intensity to last some inmates for longer than a year.

The culmination of our endeavours came in the form of a Tihar Kala Abhiyan in August 2016 when prison inmates presented their artistic endeavours, including painting, sculpture, music, dance and drama to the wider city at the three Dilli Haats of Janakpuri, Pitampura and Sarojini Nagar. There was much drama and much toil before this event took place. The jail staff was hugely reluctant to let the inmates out. The Delhi Armed Police 3rd Battalion which mandatorily escorts inmates every time they step out of jail had put its foot down. After many last minute negotiations, pleadings and bargaining, only 15 inmates were allowed out. The festival was a huge hit and momentarily played a significant role in altering the image of the imprisoned. After all, over 70 percent of prison inmates are first time offenders and a large number of them come from reasonably decent families. They are lawbreakers rather than criminals and to present their creative endeavour to the world outside is an important step in the rehabilitation of their image and of their life after prison.

Yadav faced much resistance from within and outside Tihar in undertaking this endeavour but the returns were great indeed. Our greatest reward came when after the festival’s successful conclusion, he allowed our families inside for a brief few hours. But the joy and memory of sharing a meal with one’s family in the relative quiet of a ward, in dignified surroundings, has enough intensity to last some inmates for longer than a year. For somebody like Vinod Kunwarpal, who had spent 14 years inside the jail after being imprisoned at the age of 22 before he was finally convicted, this was a moment of exceptional joy and relief. I could go on, but this singular act of generosity on the part of the administration ameliorated years of suffering for many of us.

For inmates who were poor in every sense of the term, the Drama Class allowed access to dignity and self-expression in a manner that few things can do in prison. Every time a dignitary, say a visiting judge or other guests, came to our jail, they were invariably brought to the IGNOU ward — Tihar’s showcase in terms of correctional measures. They would come to our drama class, witness the ongoing rehearsal, speak to our actors as equals, praise them and treat them as creative artists rather than merely as inmates. This brought us respect and enhanced our self-esteem in a milieu where insults and shouts are all one hears all day long. The administration was also supportive and encouraged us, which made us feel important in an atmosphere where everybody is treated like kira-makora (insects).

The performances themselves made the actors and the audiences alike forget their misery for a while and thus provided some catharsis. Using theatre, we were often able to critique both the prison administration as well as the judicial system and nobody minded it. On occasions, like on the Human Rights Day on December 10 or on Constitution Day on November 26, the administration succeeded in inviting High Court or even Supreme Court judges. The judges would watch performances, sometimes, by the very inmates whose cases they were judging, of course without knowing about it. To see such exalted figures watch our plays and then praise them was some compensation for a justice system where the ignorant and poor accused is a mute and uncomprehending witness to the manner and proceedings in which their fate is decided.

When you are cooped up inside for too long, you lose touch with yourself as well as your emotions. Prison debases like nothing else. As Wilde has said,

They scourge the weak and flog the fool

And jibe the old and grey

And some grow sad and all grow mad

And none a word may say

Prison desensitises, benumbs and degrades. It is a cruel space. Theatre allows you to vent your feelings, even sometimes find them and also to sublimate your angst. Hollywood actor Tim Robbins, who incidentally achieved much fame for his role in a prison escape film called The Shawshank Redemption, has been running a prison theatre repertory for decades. The project, theactorsgang.com/prison-project/, runs regular workshops in prisons in California and it has been documented that the prisoners he works with are less likely to be recidivists or repeat offenders than others. His work has been much lauded and supported. There are significant theatre activities in prisons in the UK and other parts of the world. Closer home, in Karnataka, the late BV Karanths’ troupe Rangayana, now run by his disciple Hulugappa Kattimani, has started an organisation called Sankalpa which has been working with prisoners for over 30 years now. Their work has now expanded to all the prisons in Karnataka and last year, the state government even made a budgetary allocation of over 30 lakhs to support their activities. They were also invited to the National School of Drama’s premiere theatre festival Bharat Rang Mahotsav or Bharangam.

Of course the work I did in Tihar was nowhere near as life-changing as the projects I have described above, but it is a start. Prison is called ‘doing time’ primarily because it is the lack of anything to do that kills your spirit. There is a great Ghalib sher that very aptly describes a prisoner’s dilemma:

Many prisoners, as I have said before, are first-time offenders and they need just about the same kind of reform in their character as free people do. They committed a mistake or an incident happened. To keep them vegetating inside prisons for years upon years is a tremendous waste of human resources. No doubt you are breaking their will, but to what end? As Wilde says again,

And never a human voice comes near

To speak a gentle word

And the eyes that stare through the gates

Are pitiless and hard

And by all forgot, we rot and rot

Our soul and body marred

And while we keep them inside, there are few activities better than theatre to keep them and their audience engaged. As I learnt during my work in Tihar, almost anybody can act. All we need is a fillip and a conducive atmosphere. As Sharan Shettigar, a Kannadiga who went to jail for a murder and was released after 14 years, says about his experience of doing theatre in jail: “Theatre has that power, even people who are mentally disturbed find balance and peace through it.”

There is a verse in the Quran that deserves mention:

It means if we start punishing everybody for their mistakes, there would be no moving creature left on earth. After all, to err is human.

Read the other parts of this series:

Part 2: Setting the stage in Tihar