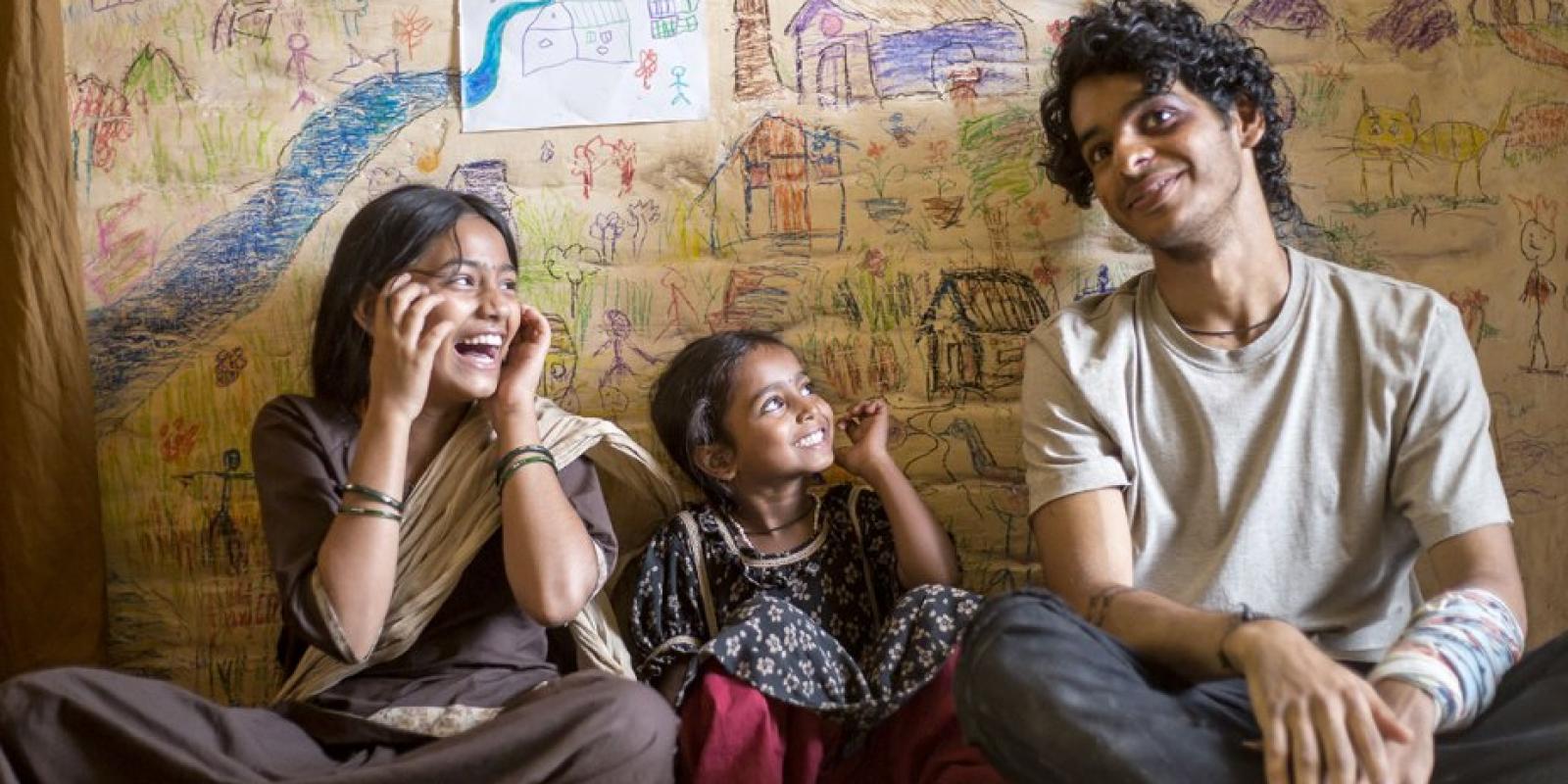 Eminent Iranian director, Majid Majidi, revisited India to redeem the failure of his USD 50 million film Muhammad: The Messenger of God, known as the most expensive film of Iranian cinema. Majidi and his international film crew did not get the nod from the Indian government to shoot in Rajasthan deserts due to some concerns about religious controversies that may arise from an Islamic historical film director's presence.

Having such an experience, Majidi came to India when he decided not only to go Beyond the Clouds but also beyond the borders, particularly the religious and the racial boundaries. Majidi’s recent film takes him back to the poetic and humanistic realms of his realism. Though the realism he has assumed in India is slightly different from the realism he had practised in Iran. In India, his realism is less conservative and more liberal, and close to the ground realities.

The only religious element in Majidi’s recent film is the Islamic names of the siblings: Tara and Amir Nishaan. The recent film not only shows Majidi’s obligations to Muslims but also his soft corner for women. Previously, he never addressed women's issues which were considered to be sensitive in Iran. But after almost three decades of filmmaking, he finally discovered women Beyond the Clouds.

As it always happens in Majidi’s realism, some facts are ignored in order to shed light on other facts. In an interview I had with Majidi in Tehran in 2013, he admitted that in a story like Children of Heaven (1997), the interference of the mother would have influenced the entire story.  He said that if the mother was to come to know about the problem of shoes, it would have been solved very soon. Majidi mulled over this matter as the obligation of storytelling. He supposed women as strong poles in Iranian families who can solve these kinds of problems immediately. That is why the mother in Children of Heaven is sick and hardly able to work at home. This manipulation in the story could be deliberated as the filmmaker’s failure to represent the non-passive roles of Iranian women in cinema. For this reason, his realism has been criticised for supporting so-called ‘expired traditional ideas.’

Whereas in India, Majidi narrates a different tale. He has brought out a thought-provoking story of the helplessness of women, whether a young widow or an elderly mother. The problems of women are only one of the many severe social issues of the Indian society raised by Majidi in his recent film. He takes his audiences to the vicious world of drug smuggling, crimes, rape, prostitution and, last but not the least, poverty.

I watched the recently released Beyond the Clouds on a Sunday evening in a PVR cinema in Delhi. There were not many people in the cinema hall, while no competitive Hindi film was on screen at the same time. The box office ticket sellers were wondering why the film tickets sold less than expectations.

The film started almost 30 minutes later than the time mentioned on the ticket. Too many advertisements targeted the audiences who had paid the price for watching the film. As a matter of interest, only a few of the advertisements were about the upcoming film.

Finally, Majidi’s film made a bang in the Indian cinema industry. The film opened to the Indian metropolis, Mumbai. In an abrupt movement, the camera swung from youngsters on a motorbike to homeless people under a bridge. Likewise, in the entire film, Majidi turned his camera to the overlooked aspects of the crimes happening in India as the unseen realities. He has the same humanistic approach towards the victim as to the criminal. The two characters might replace each other. The victim is charged with attempt to murder because she hazarded the life of the rapist, who was a single father. In the film, Majidi raises a collection of social pathologies regardless of the social divisions or hierarchical system in Indian society.

Despite the contrasts between India and Iran, the values and symbols Majidi has collected from Indian society gel with Iranian symbols of realism. The billowing washed white sheets, as a common motif in Indian cinema, is employed in Majidi’s recent film. Spatter of scarlet across the white sheets would turn the lives of many people even if a rapist’s blood is shed. This turning point happens in the very early moments of the film. In one of the later scenes, the sheets play the role of a curtain to bring security and reliability for the female members of the rapist family.

The Iranian filmmaker has tried to reduce the bitterness of his story by adding some masala to his recent film. Nevertheless, AR Rahman’s music has prevented the dance scenes from falling into the category of masala films of Bollywood cinema. Majidi had to cope with the fact that Indian audiences hardly watch movies in the absence of song and dance sequences.

Likewise, he has come to know that in India, the humanistic approach of a realistic film must adopt an Indian accent which sometimes gets a vernacular tone. He takes his camera to Mumbai’s red-light area to portray a modern slavery system in which women are sold by seeing the health of their teeth, a practice used to buy animals in rural Indian markets. The summit of this brutality is portrayed in the manner Amir treats the rapist, Akshi, in the hospital. At the same time, Amir buys him medicines to help him recover so that he is able to confess his crime in the court. Better than any of his past films, Majidi shows the contradictions of human and inhuman features that element human species.

In another effort to adapt to the Indian tone of humanism and realism, Majidi has been well adjusted with the Indian film crew. Most of his crew members are Indians. Though some of the members of his team have travelled with him from Iran. The screenwriter, Mehran Kashani, the editor, Hassan Hassandoost, and the sound supervising editor, Mohamad Reza Delpak, are some of the Iranian members of the team. For bridging the gap in the sensitivities of the two nations, they have diverse concepts to relay Majidi’s Indo-Iran message through symbolism. As a result of their accomplishments, the coughing sounds of a sick mother in the jail and a sick father at home are linked to express how poverty crosses borders even if the border constitutes thick walls of a jail. In another attempt to associate home and jail, the child characters draw a colourful painting on the house’s wall. Going into details, the vertical lines of the painting resemble the counting marks in the prisons. Though when the camera moves away from the details, a bright colourful place with houses and trees come to the forefront. The skill of the cinematographer is of great significance in fulfilling Majidi’s symbolic objectives in the film. The cinematography has come along with the clashing tone of the Indian realities. Owing to the cinematographic skills, the film characters cannot easily live with their guilt. Anil Mehta’s camera approaches the characters as if touching their conscience.

Despite the contrasts between India and Iran, the values and symbols Majidi has collected from Indian society gel with Iranian symbols of realism. The billowing washed white sheets, as a common motif in Indian cinema, is employed in Majidi’s recent film. Spatter of scarlet across the white sheets would turn the lives of many people even if a rapist’s blood is shed. This turning point happens in the very early moments of the film. In one of the later scenes, the sheets play the role of a curtain to bring security and reliability to the female members of the rapist's family.

To prove his identity in a foreign country, Majidi has his own credible films. The siblings could be an Indian version of Children of Heaven's brother and sister, some years later. Now they are grown up and support other children in any condition or clime. The director’s another endorsement is the love between two adolescents in spite of the adversaries. It is a reminiscence of the love between the characters of another film of Majidi, Rain. A scene in Beyond the Clouds in which the girl character combs her hair and the boy watches her shadow on a curtain is similar to his earlier film. Majidi has adapted many other elements of his earlier films, like the sky, the green light and the senses of discovering the nature (which are taken from The Color of Paradise) in the film under review.

Even though Majidi’s recent film has some unique aspects, some of the very ordinary Indian symbols have attracted his attention and found their way into the film. The Iranian director has tried to include the eye-catching sights of Mumbai in his film as much as possible. Places like the public laundry (Dhobi Ghat) and festivals like Holi are too repetitive for Indian audiences. In one of the closing scenes of the film, the grieving characters dissolve in a deceptive colourful festival. Squeezing Holi festival in a Hindi film is not what an Indian audience expects to watch in the cinema, however, meeting of grief and joy would be a new approach. These have come together in the film which is neither local, nor alien. Therefore, Majidi’s contribution to Indian cinema would be an Other’s Hindi Film.

This article first appeared on Irannewsdaily.com on May 8, 2018.

Maryam Papi is a guest faculty at University of Tehran and Islamic Azad University, Iran, concentrating on media and cultural studies. She has worked as a journalist for the last two decades, writing extensively on social and cultural subjects, and is the recipient of several journalistic awards. She has a PhD in Sociology/Media and Communication from Jawaharlal Nehru University in New Delhi, India and MA and BA in Mass Communication/Journalism from Islamic Azad University in Tehran, Iran.