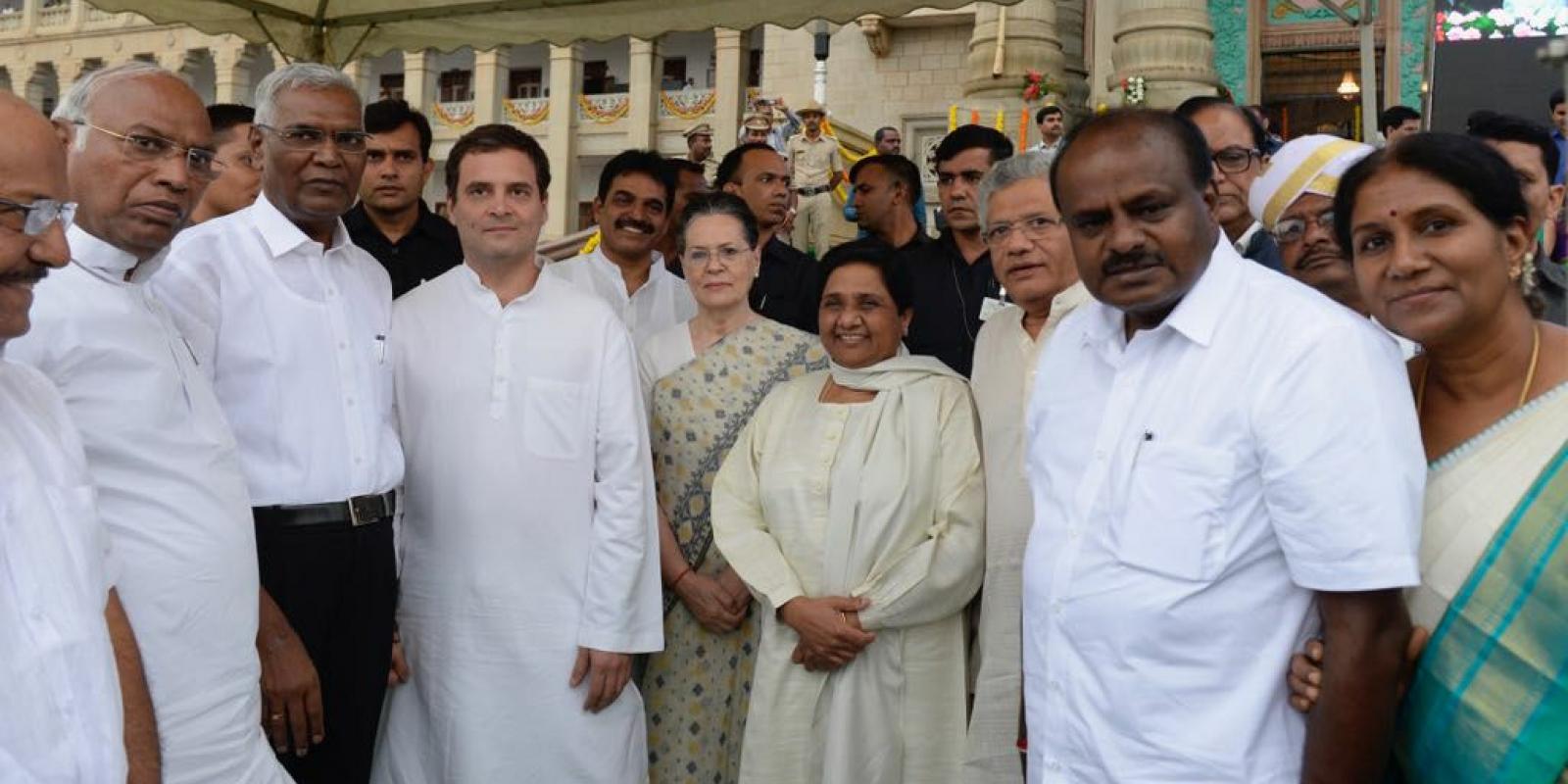 After a week of brazen political machinations and deft legal counter-ploys, HD Kumaraswamy of Janata Dal (Secular) was sworn in as the Chief Minister of Karnataka and subsequently won the vote of confidence in the Legislative Assembly on May 25. The trust vote hopefully ends the political uncertainty that prevailed over Karnataka, at least for a year, and we can now focus on the more difficult task of governance. However, what has transpired in Karnataka since the announcement of the election results raises perturbing questions on government formation that merits a closer analysis.

While the BJP’s attempt to form government with the help of a plaint governor has been characterised by the Congress as a “murder of democracy”, the BJP has dubbed the Congress-JD(S) coalition as an “unholy alliance” that betrays the election’s mandate. In an increasingly polarising political climate, it is important to resist falling into convenient political narratives and instead carefully examine the meaning of a political mandate and the morality of the actions of the key players in the wake of the elections.

Let’s first examine who had the political mandate to form the government. While no political party could hit the magic number of 112, the BJP emerged as the single largest party with 104 seats. Since the ruling Congress’ representation in the Assembly fell from 122 to 78 seats, the BJP justifiably argued that the election mandate was against the Congress.  Meanwhile, the Congress pointed out that its vote share of 38 percent is almost two percentage points higher than that of the BJP. However, in the first-past-the-post-system, what ultimately matters is getting enough seats to form a majority. Hence, there was no decisive mandate for any party, though the BJP comes closest to claiming a mandate.

The Congress-JD(S) alliance’s bid for power has been termed as unholy, immoral and opportunistic. This alliance, purportedly for protecting secularism, is far from sacred, especially because they fought a bitter election campaign against each other in which the Congress repeatedly claimed the existence of a “tacit understanding” between the JD(S) and BJP. Joining hands subsequently to keep the BJP out seems duplicitous. Since the electorate overwhelmingly voted against the incumbent government, the Congress could have taken the moral high ground by choosing to sit in the Opposition and allowed the BJP to form the government, perhaps with outside support from the JD(S). However, electoral politics has now become a merciless quest for power where winning is all that matters. As the seeming invincibility of the BJP have put the Opposition parties in an existential crisis, the Congress’ decision to support a JD(S)-led coalition government in Karnataka shouldn’t surprise us.

Does the flagrantly opportunistic nature of the Congress-JD(S) alliance mean that it betrays the people’s mandate? This requires us to explore the meaning of a political mandate more closely. In a multi-party democracy, political mandates do not always come in a neat and well-defined form. Even when there is a supposedly clear mandate with a single party getting a majority of seats, they rarely get a majority of the votes polled (Meanwhile, Congress-JD(S) has a combined vote share of 56 percent). However, the problem with a post-poll coalition (unlike a pre-poll alliance) is that it doesn’t give the electorate a direct say in deciding which political coalition forms the government. Some voters would justifiably feel cheated in such political formations.

Nevertheless, post-poll coalitions have become ubiquitous in India, sometimes bringing parties in ideological extremes together (The PDP-BJP coalition in Jammu and Kashmir, being a classic example). Even in mature multi-party democracies in Europe, post-poll coalitions are becoming more common. Earlier this year, the Conservatives (CDU/CSU) and Socialists (SPD) once again formed a post-poll coalition government in Germany. Unlike a Presidential system where elections are meant to be decisive, multi-party parliamentary democracies by nature seeks to represent diverse voices. Hence, a political mandate should not always be seen in the singular, but as a representation of multiple interests and aspirations of diverse regions and constituencies. In a fractured mandate, what is important is whether the coalition can keep these diverse interests and constituencies, with its own contradictions, together.

The Morality of “Horse-Trading”

Karnataka elections also brought to the fore concerns regarding the Governor’s role in government formation. While both the Kumaraswamy-led JD(S)-Congress alliance and BJP’s BS Yeddyurappa staked claim to form government, Karnataka Governor Vajubhai Vala extended the invitation to BJP’s Yeddyurappa and gave him 15 days to prove a majority in the Assembly. The Governor chose to invite Yeddyurappa even though he did not have letters of support to demonstrate that he enjoyed the support of the majority. Even if he was able to get the support of the independents, there was no way in which the BJP could have attained 112 seats without engineering defections from the Congress or JD(S). Hence, the decision of the Governor to invite Yeddyurappa to form the government was fundamentally flawed.

The resignation of Yeddyurappa even before holding the court-mandated floor test is a testament to the fact that the Governor’s decision was specious. By giving a generous 15 days to prove majority, Governor Vala effectively sought to facilitate defections from the Congress and JD(S) to the BJP. What is ominous for Indian democracy is not just the Governor’s partisan conduct, but also the justification of defection offered by constitutional functionaries. During the midnight hearing challenging the Governor’s decision, Attorney General KK Venugopal argued that the anti-defection law would apply only after the MLAs are sworn in, a claim which the 3-judge bench of the Supreme Court dismissed as being “preposterous”.

What was also troubling to see was the efforts made by sections of the media and the commentariat to justify poaching of MLAs by arguing that the Congress-JD(S) alliance is also immoral. Popular writer Chetan Bhagat tweeted: “In a hung Parliament, there’s no ethical way out. So let’s stop moralising either side please as it is a pointless exercise. Even horse trading is an art form. Another test for both BJP and Cong. Let’s see who’s better at it”. Such narratives attempt to paint both the post-poll coalition and horse-trading as equally morally culpable. However, a post-poll coalition is a legitimate, even if opportunistic, political formation while political “horse-trading” is a blatantly illegal and criminal activity. Drawing any moral equivalence between the two is morally reprehensible.

While the Supreme Court’s interim order to conduct the floor-test has prevented “horse-trading”, the larger question regarding the constitutionality of the Governor’s decision remains open. Even though a judgement on this question wouldn’t have any immediate political consequence in Karnataka anymore, it can become a binding precedent on the question of discretionary powers of the Governor to appoint a Chief Minister. Though the landmark SR Bommai judgment has been cited to justify the Governor’s decision in inviting the single largest party, it does not apply to the fact situation of post-poll coalitions. While the more recent Chandrakant Kavlekar case regarding government formation in Goa had a similar fact situation, it didn’t examine the question of Gubernatorial powers. Since the Governor’s office is susceptible to the Central government’s whims, it is important for the Supreme Court to lay down a reasoned judgment that clarifies the extent of Governor’s discretion in government formation.

Mathew is a research consultant at the Centre for Law & Policy Research, Bengaluru.