Are storms the new norm? 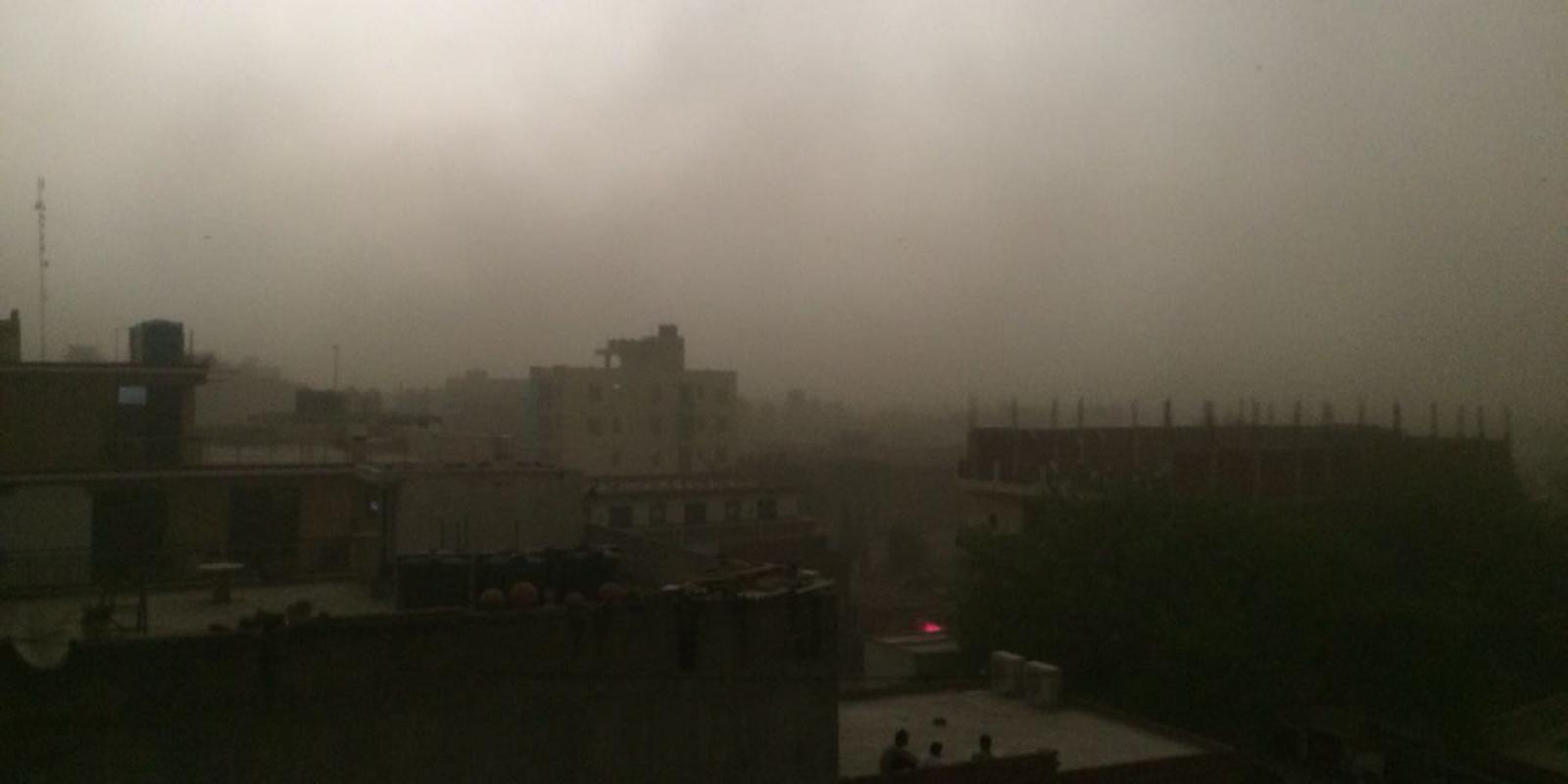 Since May 2, a large number of dust storms have swept north India, harbingering the beginning of a new trend that is being linked to climate change

On May 2, people in north India were caught unawares by a blinding, fierce sandstorm that had been brewing silently in the plains. In Uttar Pradesh’s Agra, which was one of the two worst-hit districts in the country, tourists were strolling the expanse of the majestic Taj Mahal at the time when the wind started swirling on the horizon along with sand and dust, forcing people to dash for cover. In Alwar (Rajasthan), which was the other town that registered widespread damage, people, who were out on the streets in their cars, recounted how they abandoned their vehicles and took shelter wherever possible because the wind speed seemed strong enough to topple a four-wheeler.

Such was the ferocity of the sandstorm that for days after it stirred the heart of India’s power centre Delhi along with other states in north India, people recounted how the wind howled outside closed doors and wrapped everything in the vicinity that would be visible to the eye in a thick, billowing blanket of dust. The loss was massive. A total of 124 people were reported to have died across five states, while over 200 others were injured. The worst affected areas were Rajasthan and UP, where massive destruction was caused to property, trees were uprooted and kuccha houses fell apart.

What caused uproar was the fact that thunderstorm activity is considered to be a normal occurrence in the pre-monsoon period — and yet preparedness was low and the damage widespread. Even though the Indian Meteorological Department (IMD) had on its part warned that thunderstorms and squall with a wind speed of 50-70 kmph would sweep at least 20 states across north India and the North-east, the actual intensity of the storm was far higher than what was speculated. Since then, a large number of thunderstorms/duststorms have swept the northern part of the country frequently, harbingering the beginning of a new trend that is being linked to climate change. While no such study has been carried out in India that establishes a correlation between the two, research work focussed on such occurrences in other parts of the world have concluded that increasing incidences of sandstorms can be attributed to rising surface temperatures.

A study published in Nature journal, titled Projection of American Dustiness in the late 21st century due to climate change, used a multi-model output under the Representative Concentration Pathways 8.5 scenario to show that climate change will increase dust activity in the southern Great Plains from spring to fall in the late half of the 21st century. Another paper published by the Princeton University said that the 2015 storm which blanketed large areas of seven Middle East nations and led to several deaths and respiratory ailments and injuries was caused by a combination of climatic factors and unusual weather. One of the researchers associated with the study, Elie Bou-Zeid, was quoted as saying, “The simulations showed that what was very unique about this storm is that first, it was preceded by a very hot period, and so the land that was not covered with vegetation would be drier and it would be easier to entrain sand grains from it.” Similar conditions seemed to have preceded the May 2 storm and the ones that have followed it. In fact, experts claim that both heatwave and thunderstorms are results of similar weather conditions.

With climate change setting new norms for every season every year, it becomes imperative to ask how prepared are we to face future calamities, especially in the backdrop of the May 2 incident. It is also important to evaluate what all went wrong.

Dr Mrutyunjay Mohapatra, a scientist responsible for monitoring heatwave and thunderstorm activity at the Met department, says that climate change has provided the necessary conditions for the formation of a storm, even if a direct link cannot be drawn between the two. “Thunderstorm, dust storm, squall, and lightning — all these belong to one family, which is the thunderstorm family. They require extreme temperatures and the surface air should be hot enough to rise up into the atmosphere. When hot air goes up, it comes in contact with cold air. If moisture is there, then condensation takes place and clouds are formed. However, in places like Rajasthan, which is a desert, sand particles get lifted by hot air into the atmosphere. If the atmosphere is unstable, it can lead to the formation of a storm,” explains Dr Mohapatra. While moisture is crucial for a thunderstorm, the absence of moisture along with extreme heat conditions and an unstable atmosphere can lead to a dust storm.

“What we witnessed this year on May 2 was however caused by Western Disturbances (WD) which acted as a trigger for the storm,” the Met expert says. Even though the destruction caused by the storm and the media coverage that followed made one think that it was a phenomenon that was one of its kind, Mohapatra digs into the records to show that Delhi has witnessed worse storms: “We have recorded thunder squall with a wind speed of 141.6 kmph, probably in 2006. In 2014, we had storms with a wind speed of 122 kmph. What we have witnessed this year is not a record-breaking windspeed or thunderstorm activity. But what sets this year’s trends apart from the previous ones is that the frequency and the intensity have been higher.”

With climate change setting new norms for every season every year, it becomes imperative to ask how prepared are we to face future calamities, especially in the backdrop of the May 2 incident. It is also important to evaluate what all went wrong. According to both the IMD and the National Disaster Management Authority (NDMA), the wide-scale devastation caused on May 2 was primarily because the intensity of the storm was very high and it struck in the middle of the night when people were asleep, as a result, roofs and trees collapsed, burying many under the debris. A report published on a national TV channel’s website pointed out how one of the Doppler weather radars in Rajasthan, which was one of the worst-hit states during the squall, had not been functioning for 10 days. Other reports talked of how the warning issued by the IMD was too vague and didn’t specify the districts that would be impacted.

At the IMD, studies are going to be undertaken to analyse the correlation between climate change and dust storms in India and more Doppler weather radars are to follow. As new norms take shape in the wake of global warming, India’s disaster preparedness is going to be put to test more often.

Responding to the charges, Dr Mohapatra says that the Doppler weather radar in Jaipur that was not functional made little difference to the ability to predict storms because the radars in Bharatpur (Rajasthan) and Mathura (UP) were functional. Each Doppler weather radar can be used to monitor a range of 230 km. He says that the real challenge in predicting the intensity of any storm is the lead time one gets. “A thunderstorm is a very small-scale phenomenon. It is the size of about 10 km and has a life-span of about half an hour to three hours. The numerical weather prediction model can only give a potential zone or a potential area which is prone to thunderstorm activity but it is difficult to pinpoint the districts that are going to be impacted by it well in advance,” he says. It means that as opposed to forecasts, thunderstorms can only be predicted via nowcasts that are valid for the next three hours. Therefore, there is a lead time of about 2-3 hours to prepare and alert people.

“Since it is time-sensitive, it is also important for the nowcast to reach the masses in time. Only then can action be taken. Also, the public must be aware of the do’s and don’ts,” says the IMD scientist.

Taking its lessons from what happened last month, efforts are underway to establish a more robust preparedness and response system in place. The NDMA’s Twitter handle can be seen tweeting the do’s and don’ts during thunderstorms and lightning. Elaborating on the lessons learnt from the May 2 storm, NDMA’s secretary RK Jain said in a written response to Hardnews, “These incidents (have) further emphasised the importance of accurate and timely early warning besides its swift dissemination to all concerned stakeholders. Other lessons include strengthening preparedness and mitigation before the onset of a particular disaster’s season. Moreover, the importance of generating greater awareness among the public and building local capacities to respond to an emergency situation cannot be stressed enough.”

At the IMD, studies are going to be undertaken to analyse the correlation between climate change and dust storms in India and more Doppler weather radars are to follow. As new norms take shape in the wake of global warming, India’s disaster preparedness is going to be put to test more often.