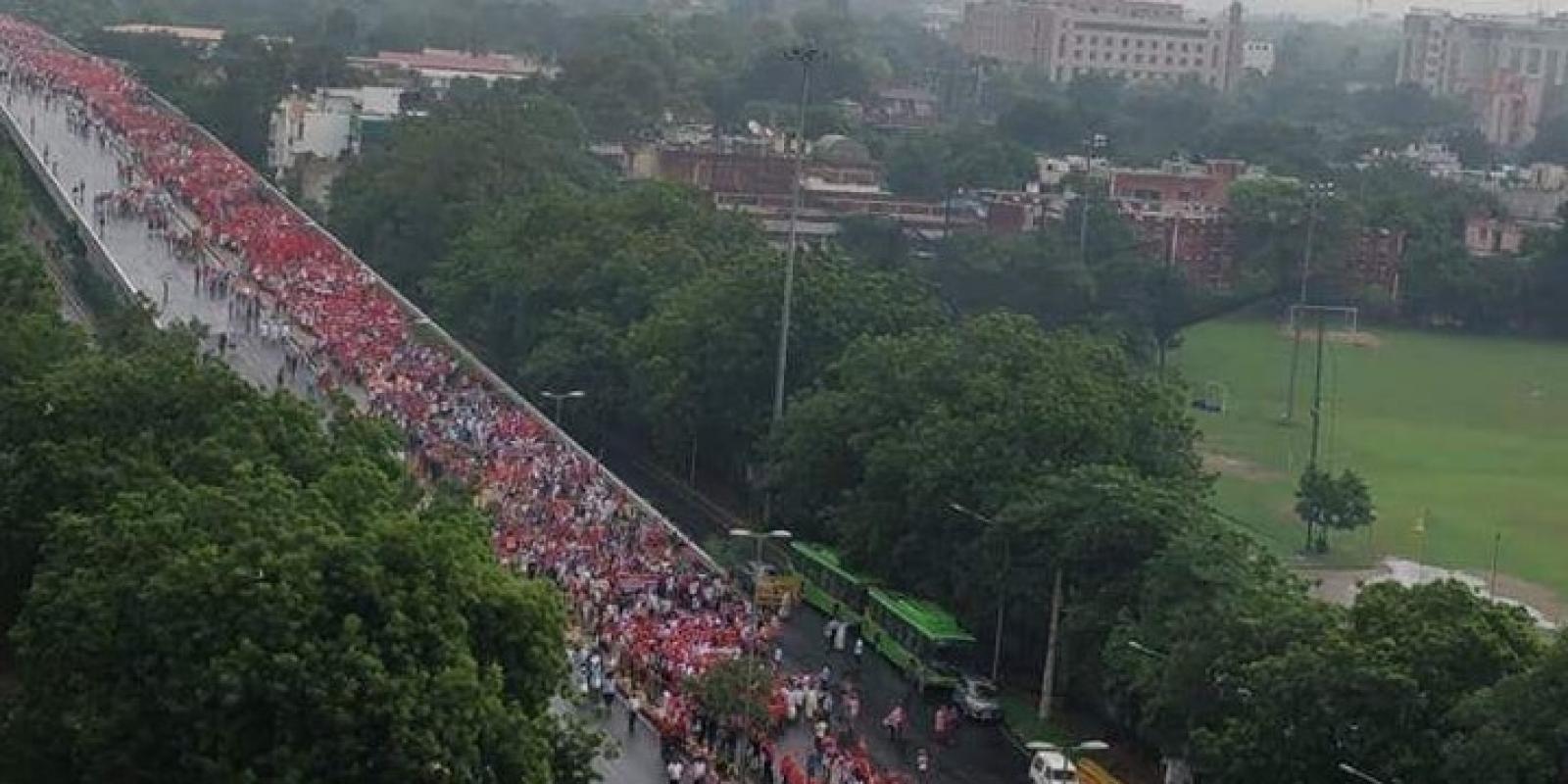 “If the farmers are asked to return their loans then 30 lakh would commit suicide than just the 3 lakh that have ended their lives due to debt in the last decade,” claimed Dharmendra Malik of Bharatiya Kisan Union (BKU) during a roundtable organised by Hardnews Magazine on “ the agrarian crisis” in Delhi last month.  According to him, people were joining farm protests all over the country, as the pressure has been on them to return farm loans soon. UP, for instance, has reduced the delivery of these loans from an year to six months.

The anger and desperation shared by Malik in the conference was in evidence when the Kisan Kranti Yatra organised by BKU reached the borders of Delhi on October 2. The Delhi Police blocked their onward journey fearing that the protestors will park themselves in the verdant lawns of Boat Club or Ramlila Grounds or wherever they found some shade. Memories of the late leader of Western UP farmers, Mahendra Singh Tikait, still tormented those mandated to control traffic as well as law and order situation. Tikait had come to Delhi 30 years ago and refused to return home with his brood. This writer remembers the palpable nervousness in the administration to ensure that there was no violence and to convince them to leave Delhi. Hectic negotiations were undertaken by Congress ministers to convince the BKU leader to vacate the Boat Club lawns. And when he did finally move, the authorities discovered that lawns of India Gate resembled the fields of Western UP. This convinced them that BKU had  to kept away from central Delhi.

Since then, the ferment amongst the farmers has only worsened. Majority of them, if they had their way, would sell their land off and move to other jobs- if there are any. A CSDS-Lokniti survey, from 2014, suggested that 76 per cent of the 5,000 farmers in 17 states wanted to sell their land due to stress and lack of viability and do other things. In the last 4 years due to certain policies of the NDA government, the agrarian crisis has acquired calamitous proportions.  Majority of the farmers are willing to do anything- including brave bullets or walking from their far away villages to capital cities- to wake up the somnolent government.

Last year the farmers converged in Mandsaur, Madhya Pradesh. Result: 7 of them died in police fire. What surprised the agitators was the brutality displayed by the Police and other authorities. They were treated as the enemy of the State and social media supporters of the ruling BJP attributed all kinds of motives and radical affiliations to them when they were merely asking farm loan waiver and justice.

Earlier this year, farmers in Maharashtra walked 180 kilometers from Nashik to Mumbai to beseech the political leadership to do something about their miserable state. Moving images of these farmers - some of them even barefoot with bleeding soles- brought home the anguish and desperation of those who grow food for the nation. At least the Maharashtra government did not water hose these agitators that had thousands of women farmers. Instead, they were allowed to enter Mumbai and leave, too, with dignity. During the brief time that they were in the Western metropolis, there was visible outpouring of sympathy. The government of Maharashtra promised loan waiver and also agreed to look into their other demands. Happily farmers returned home in the hope that relief was around the corner, but many months later, their problems have not really eased. New difficulties have got added up including unfair and unjust land acquisition to complete large projects like the Mumbai-Ahmedabad bullet train project. Farmer agitation against acquisition has stalled the prestigious project.

These unaddressed anxieties are pushing the farmers to head towards the national capital and demand relief. Their problem has been exacerbated by some disruptive policy decisions taken by this government like demonetization and GST. The banning of large currency notes proved catastrophic for small and medium enterprises (SME) as well as for the farm sector. Millions of jobs were lost, which never returned. For the first time in many years, there was reverse migration from cities to the villages. During the Hardnews - round table it was revealed that about 2.5 crores educated young men, who were earlier employed in the cities, have been forced to return to their villages. Ideally, it should have been a good augury, but the crisis agriculture is in, it only meant a greater burden on the land and the village economy. What is also aggravating this problem of unemployment is the denial by the government that the note ban caused any harm. They just do not want to create new opportunities except mouth new slogans. Figures by Centre of Monitoring of Indian Economy (CMIE) and by trade associations have corroborated these findings.

As brought out by one of the leader of the farm movement, Mirian Dhawale, that led the successful march to Mumbai, the women were the backbone of the march- not because they were accompanying their husbands or their sons, but they know that their children will die if they cannot protect their farm or agriculture. It’s these women again who fight with forest and land officials when they come to acquire their land for projects. “Women would not have given away their land for projects if it was in their name,” Dhawale said. The catastrophe that agriculture is never told from the perspective of women and this is a major failing of those who lead farm protests as well as those who craft policies in the comfort of Krishi Bhavan or Niti Aayog.

The farmers have been demanding increased MSP and loan waiver as a right. The clandestine waivers that the government and banks have given to the industry strengthen their demand. Farm leaders and opposition parties are quick to point out that Rs.3 lakh crores have been waived off of favourite corporate houses ever since the NDA government has been power. This is a compelling argument that the government finds it difficult to answer. Also, some states are giving loan waivers and others are still resisting creating greater misery on farmers who are uncertain about their future, which has been exacerbated by Indian government’s commitment to the World Trade Organization (WTO) and the recent orders it has given to countries like Mozambique to grow pulses. The farm leaders angrily claim that government is keen to give more than the MSP to the farmers of Mozambique, but not to its own people.

The NDA government that was vehemently opposed to the higher MSP that was given by the earlier United Progressive Alliance (UPA) has been stung by the growing farmer suicide and the resolve expressed by their organization to ensure the defeat of BJP in 2019 parliament elections. “We can vote out a party in power, but we cannot be sure that the one who gets elected will look after the interests of the farmers”, claimed BKU leader Malik.

Many of these farm leaders also worry about the growing non-viability of agriculture and the shift in demographics in favour of the cities. “This is probably the last chance that the farmers have to influence the national agenda, thereafter we do not know whether anyone would listen to us”, reflected a leader during the Hardnews- FES roundtable.