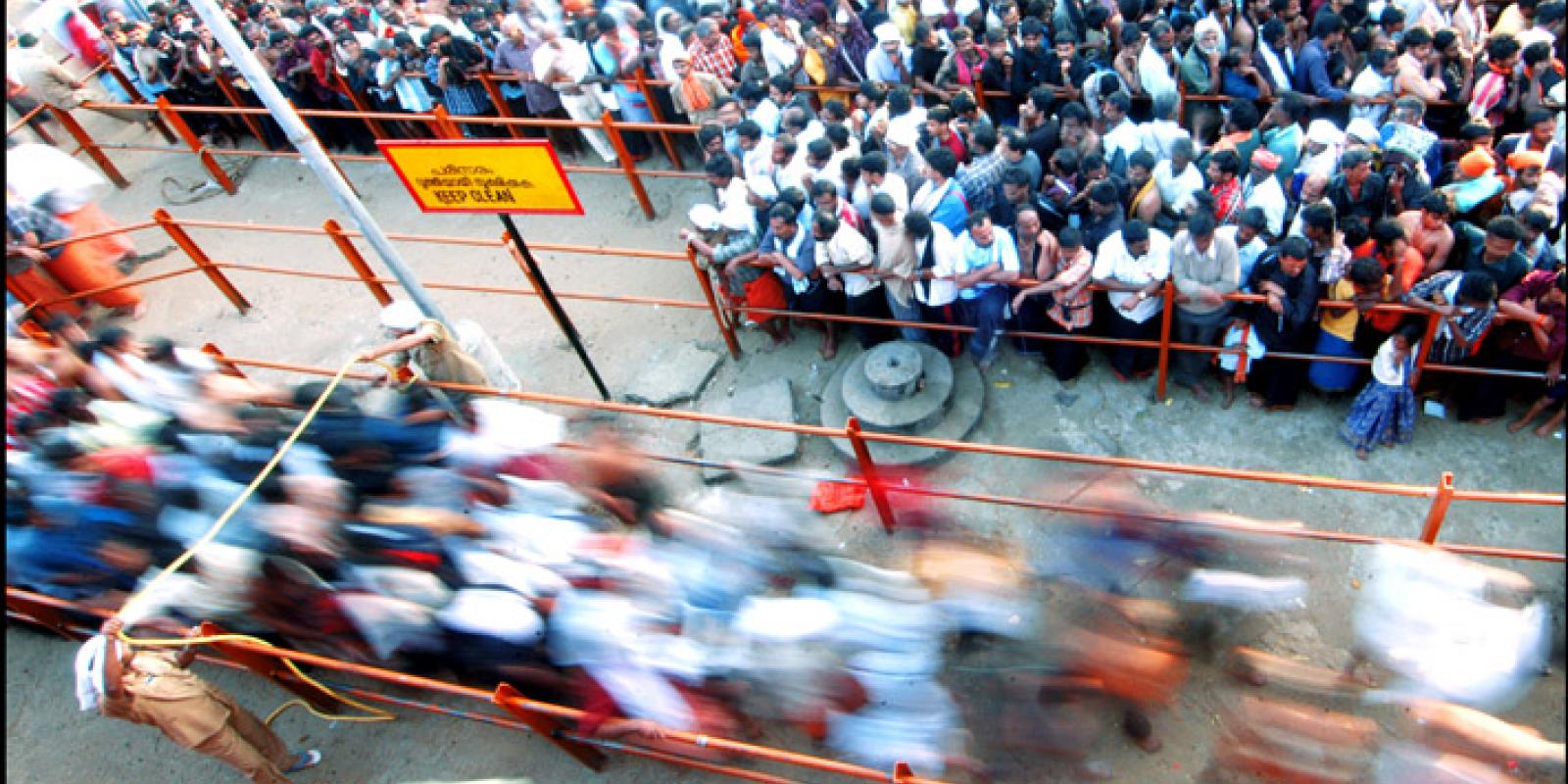 New Delhi: Women between the ages of ten and fifty  were debarred from visiting   Sabarimalai once  the presiding patriarchs of religion and cultural practice  moved the judiciary, setting  in place  rules constraining  women  on account of their  menstrual abilities.  Termed customary practice, this was endorsed and reinforced by the Kerala High Court from1991 onwards.

Sabarimalai’s male devotees undertook a rough passage  to the sanctum sanctorum ,  cutting their way through  dense forest undergrowth,  upstream  and in the direction of the hill invoking  the name of  Lord Ayyappa, as they ascended  the eighteen  hallowed steps. This required  an intrepid forty-one days  of hardship and deprivation,  involved  the non- trimming  of hair and nails, eschewing meat, eggs, fish, fowl , onion, garlic, smoking, alcohol  and compulsory celibacy; alongside the prescribed practice of unaccustomed kindness to everybody around them. Definitely tough austerity in a religion that usually prescribed easy codes for men on most matters.

As young adolescent, long hard stares at grandmothers, aunts and older cousins, some married and others holding jobs, failed to discern signs of resentment. The women moved around nonchalantly, organising special foods and sleeping arrangements, ensuring that all the rituals of purity were followed and that all forms of pollution; liquid, solid and those of the flesh were kept in abeyance from these unkempt spiritual warriors who followed sacred rituals, dressed in black, carried  mudikattu, and walked two kilometres from the Pampa river  to the temple, climbing  to the sanctum, a forty feet high podium upon a plateau.

For any eleven year old, group travel to an unknown destination and a difficult ascent to a mysterious shrine is an exciting proposition. Of course I made furious plans to  subvert  the system by somehow  storming  the citadel and hurling  myself in front of the deity at Sabarimalai during the banned years,  at the end of  a life altering journey   overshadowing   all known exploits of heroism and devotion. My fantasies were cobbled from clumped up readings of Meerabai, Ghazni , Sher Shah Suri and Joan of Arc.

Subsequent years failed to whet my desire for Sabarimalai. Not because life   became easier for women or because the rules had inexplicably changed. The mobility of the twentieth century enabled visits to extraordinary temples, monasteries, churches, mosques and synagogues in different parts of India and the world. Discovering the tranquillity and joy available at each destination and absorbing the synergy that people brought to the sites healed, calmed and energised, helped in the appreciation of the supreme significance of the human connection in all of this.

Visits to any shrine made unwelcome by blinkered men, cannot really continue to hold meaning for women in today’s world, wherein   innumerable accessible options exist.  Abject female devotees of Ayyappa, terrified and bullied by their men, obstructed from climbing the Sabarimalai Temple because of inappropriate menstrual ages, might be in existence but arguably, would remain minimal in number.

However, if women  of inappropriate age, were  desirous of  partaking in the  Sabarimalai pilgrimages,  such desire should  be accepted  and opportunity  made available as a matter of  both principle  and right.

The current Sabarimalai controversy from a geographical and philosophical distance, throws up variants of the old binary oppositions that continue to be played out in relays of:Law versus religious practices; religious orthodoxy  versus  menstruating women; political leadership versus  women’s rights, the women of the right and  ostensibly, women in the wrong.

Arguably, the law is not qualified to make an intervention into matters of religious ritual that are not essentially discriminatory, as Supreme Court Judge Indu Malhotra, opined. For this to be true, we need to readily accept the viewpoint that women’s   identities complement those of   men. Ergo, women’s exclusion from Sabarimalai cannot be changed by a court order.

However, the different roles men and women play in the cultural sphere are not because of egalitarian choices but as a result of the limited options that exist for women. Practitioners of religion and law makers in patriarchal cultures have invariably been men. Cultural patriarchy and religious practice have continued to form the tines of the trishul that has often been aimed in the direction of women and minorities. Arguments about the complementary nature of women’s lives have now become increasingly untenable.

When the ban on  the entry of women between the ages of ten and fifty from  visiting Sabarimalai  passed by the Kerala High Court  in 1991 was  revoked by the  Supreme Court in 2018,  bizarre responses were made by men  policing and controlling women and disrespecting them in private .  One man in public office, offered to tear apart the limbs of women of dubious age approaching the temple and fling one part in the direction of the Centre. This from an apparent saviour of the Sabarimalai tradition which prescribes that male aspirants treat other lives with sanctity and respect. Meanwhile ‘activists’ and ‘protesting women’ were attacked and manhandled by dissenting devotees  at the site and on their return home by miscreants and.socially ostracised by their communities.

Sabarimalai, draws its name from Sabari, the elderly female ascetic who waited upon Rama during his post-banishment forest sojourn.  Sabari  served Rama  berries after  sampling each one  for sweetness. Rama accepts this offering of fruit, despite its initial contact with Sabari’s spit,  and displays remarkable unconcern with  the issue of pollution from the  “jhoota”ber.   While in itself, the episode validates selfless devotion and its acceptance,  Sabari herself has been mythologised sexlessly for her self-effacement and patience. Her conscious decision to reject a material and conjugal life for a life of celibacy has seldom been the subject of any exploration. Surely, this story of Sabari’s hill and oral accounts by living women of visits to the temple suggest that rules banning women of a certain age seem to have been devised subsequently by a misogynistic mindset.

Oddly, Rama and Lakshmana met Sabari’s mentor, Shakta, after meeting her,  on this very hill. This event continues to be celebrated every Makara Sankranti at  Sabarimalai.   It is also intriguing  that  rules at Sabarimalai, and other pilgrimage sites, have been more accommodating of modernity in the case of  the male of the species .Truncated versions of  the  pilgrimage exist,  wherein the  forest climb can be abandoned altogether, granting  instant karma to  entitled males.

Why should  Sabari ‘s hill  be shut down  for women folk who fall into the  procreative age, especially when no such rules are  in place for pubescent or mature  males who would be part of a similar demography group?  Why should it be so difficult to extend the courtesy of modern frameworks to women as well?  This distinction must be explained to both Amit Shah and Shashi Tharoor, so the former can stop challenging the court’s authority and  the latter  can desist from  making sympathetic noises and  conciliatory arguments  to cushion hidebound patriarchal policies.

Smriti Irani  must also  be helped to understand that women do not  crave to carry soaked  napkins  dripping  in menstrual blood to Sabari Malai. In fact, devout Hindu women rarely visit temples when menstruating, possibly because of conditioned cultural practice.  We need to look beyond contemporary confusion in order to find solutions to this imbroglio.

The argument needs to be couched not around the physical possibility of bloody ooze from the female body,  but in  metaphorical issues of  eligibility. A devotee or a worshipper has the right to access and the bhakti traditions sanction this. Rama’s acceptance of “jhootey ber” reiterates this.  Yet eligibility has been granted in an extremely skewered fashion, and the focus has been  on  denying and marginalising women.

Ayyappa is a male god, apparently fathered by two men. His very birth seems primarilya denial of female space.  Although Ayappa has been brought into existence by male desire, men do not go to Sabarimalai to pray for progeny, (however inspirational the birth story of Ayyappa might be). Sabarimalai is not a primary shrine for men praying for offspring, as most men will assert vociferously.

The token rejection of the material life and of material desires prior to the journey is in fact a prologue to the preparation for a higher, spiritual life. Therefore,  we need  to recognise that the journey to Sabarimalai  is meant to simulate an all-important  spiritual journey. Why then should visits to this shrine, demarcated as a space for rigorous spiritual training, be made available only to procreating males, non-menstruating girls and never-menstruating older women?

In the case of spiritual training, attention and concentration is supposed to be deflected from the physical body. The physical body is inhabited by both men and women in the real world.  Both women and men have physical bodies that discharge different bodily fluids and solids from multiple orifices all through their lives. No constraints are imposed upon the male body, which is subject to puberty and readies itself for reproduction. Boys who have attained puberty and have also been invested with the sacred thread go all the time to Sabarimalai, carrying upon their persons, functional reproductive apparatus.  On a point of law, surely, this is discriminatory?  If a pubescent male can go to Sabarimalai, why should the pubescent female capable of menstruation be denied access? The training for spiritual growth should be allowed to both bodies since   sauce for the gander is most certainly sauce for the goose.

Spiritual journeys, if they are to be valued, must demand the same rigour and provide similar conditions of training for men and women. After all, as the mythology tells us, this was once Sabari’s mountain. She did not become a wise and revered woman because she was allowed access to a spiritual life after she stopped menstruating. In fact, she went on a pilgrimage in the prime of her life, choosing a spiritual life over conjugality andworldly desire.So this ritual practice by a denomination, must provide  fecund women the same opportunities to climb the eighteen steps that they allow to robust men.

Religious prohibitions of yore continue to  prevent women from being active players. Menstruating women cannot visit temples, Sunni women in Kerala are not allowed entry into Mosques, Zorastrian women cannot visit the fire temple, and upon marrying  a non-Zorastrian , women even  lose their  right to  die in the Tower of Silence. These continuing religious practices obstruct and diminish the  rightful growth  of women.  The rights of religious dominations with regard to women parallel the modern context of access to privileged clubs that accommodate only a select few although the latter discriminate on the basis of   class and group rather than gender.  Surely we need an equitable playing field for gender in modern religious contexts?

Social change is slow and happens long after a law enabling a practice is put into place. It does not help matters if Amit Shah in clear contempt of court declares that the Supreme Court must not legislate on what it cannot implement. It is not the court which has to implement, it is we the people, who must work at ensuring that legislations are put into process.

Women, irrespective of age, caste and religion should be able to access the Sabarimalai temple, as and when they please.  In fact,  Women should have access to all places of worship that men have access to  as well as  access to the same death rituals if they so desire. Women across cultures have been denied access to a spiritual life for an inordinately long period. It is time to redress this and turn our temples into enabling and empowering spaces for women.