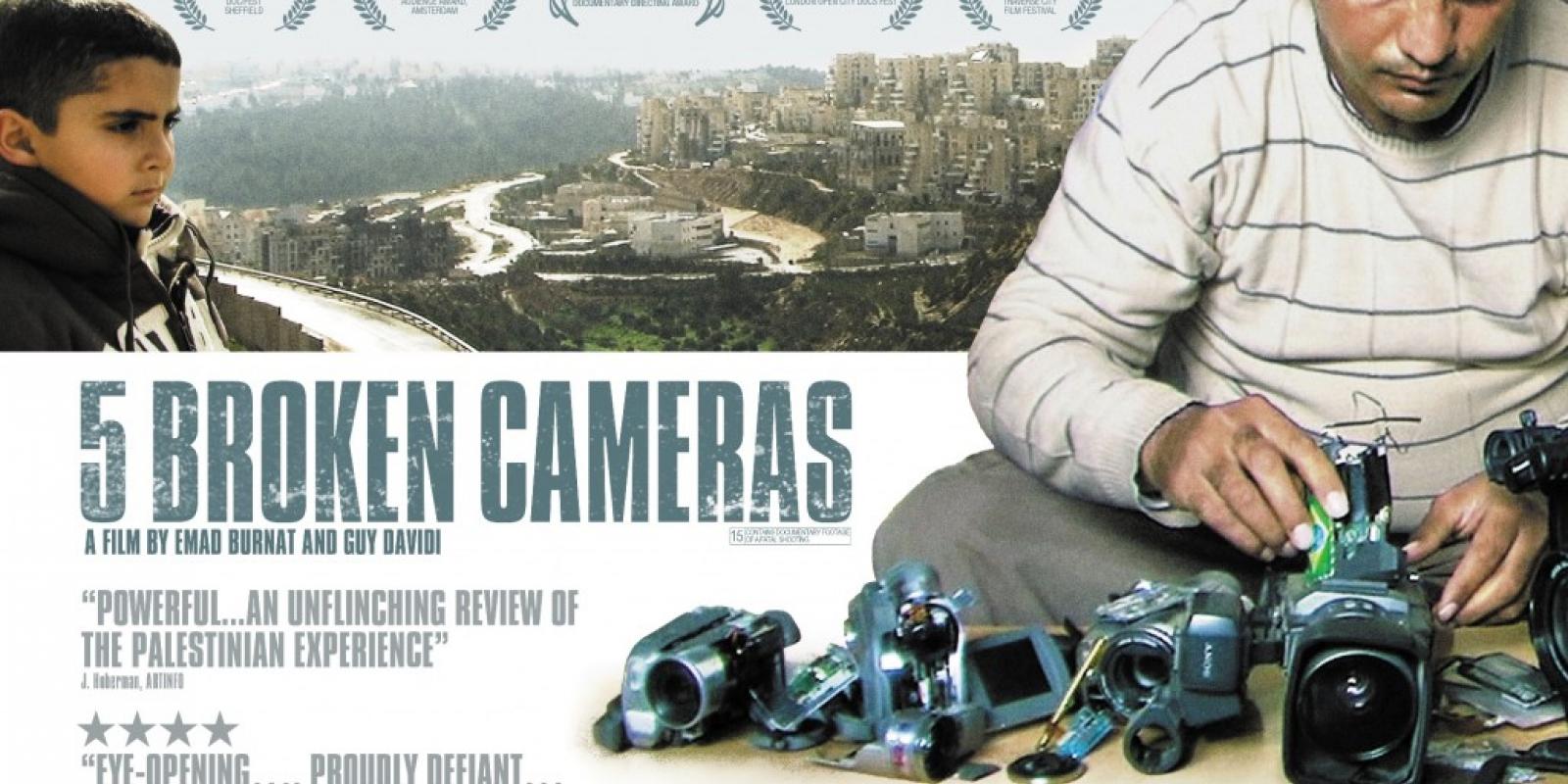 “I film to heal,” says Emad Burnat, the village-farmer plus filmmaker of the internationally acclaimed film on the struggles and daily life in Palestine, 5 Broken Cameras. The film has not only created a new genre of ‘documentary-feature film’ across the global film festival circuit, but has also become a compulsory part of the film curriculum of miscellaneous film clubs and prestigious film schools and film studies departments in various campuses across the world. Indeed, it has become a synthesis of theory and praxis, and is a pointer that even an untrained villager can use his camera to record a protracted and historic narrative risking his life and that of his family. Despite this cinematic documentation, the film has been critically appreciated across the globe, including in India, because it is neither propaganda, nor is it didactic, even while it captures a daily reality of injustice, struggle, tragedy, reistance and stoic resilience from an insider’s point of view, and with the camera as the mediator.

5 Broken Cameras is a first-hand account of protests and everyday life in Bil’in village in the West Bank in Palestine which has faced the daily turmoil and harassment of being an Israeli barrier. Emad Burnat bought a camera in 2005 for the first time to document the birth of his youngest son. In 2009, Israeli co-director Guy Davidi joined the five-year project. The film has won the Sundance Film Festival Award and the Golden Apricot Award at the Yerevan International Film Festival in Armenia. It has won the International Emmy Award and was nominated for the Academy Award in 2013.

Recently in India, where his film was screened in several cities, Emad Burnat spoke to Hardnews in Delhi.

Why did you buy a camera?

I like to film my family. I love the camera. It’s my best friend. When the struggle started in my village against Israeli’s land occupation, I decided to participate in the historic struggle with my camera.

Meanwhile, I was filming the life of my son who was growing up under the occupation. I didn’t realise the struggle will continue for five years. I am the only cameraman in the village documenting everything. So people from outside approached me for footage. Then, I started to think of making a personal film about the struggle.

In your movie, the camera acts as a witness. Do you think the camera makes you less vulnerable to Israeli attacks?

A camera is a very strong witness. I felt the camera will protect me. It’s just a feeling. In reality a camera might kill you, or, get you killed. It’s a strong weapon. Many times, Israeli soldiers warned me to stop using the camera. By being witness to all these human rights violations, the camera gives a feeling that it protects you and the people around you. It forced the army to use less violence against the people.

Your film is an example of a ‘first person film’. Why is the ‘lived experience’ important in telling the story. How does it help?

The people who came from outside with their cameras lack the lived experiences of the land. I am a Palestinian and I live the reality. I have lived this experience my entire life with my wife and kids. I have faced the occupation every day. There is a power in telling your story by yourself. Even if an outsider comes and stays in Palestine for a long time, he will not feel the reality as I can feel as a Palestinian. An outsider might not put his life at risk to make a film about Palestine. For him, filmmaking is a professional exercise. For a Palestinian, it is part of the struggle for the liberation of the people.

How did your perception change with and without a camera?

When you are behind the camera you became more real. You can feel yourself in the story. Everything you shoot is related to you. When you are not with a camera you don’t feel like this. When you are filming you feel that you are making something important and effective and you are helping the Palestinian cause.

Your brother was arrested, your family was harassed and your friend was killed in front of your own eyes. You choose not to react, but to film. Why?

I thought this was the real time to film. If I stopped filming all this real moments and real times, then there is no film. When you film and continue filming you forget what happens to you. You are inside the moment and it heals you. If you stop filming and start thinking about the injuries, the healing will be hard.

You filmed for five years continuously. How was the editing process?

I had a lot of footage. I have been filming for five years. When I was filming I was noting down what is inside the footage. I knew what I need to use. I remember every moment. Be it the protests or my personal moments. From my personal footage, I chose the effective footage which fits the narrative.

There are multiple forms of discourse on the Palestinian struggle. Some people are arguing for armed struggle, while others are opting for non-violent struggle. What is your opinion?

My role and moral responsibility as a Palestinian living under Israeli occupation is to struggle. A Palestinian has the liberty to choose the way he wants to fight the occupation. I can’t distinguish which way is wrong or correct. What matters is the continuous struggle. Clinging to the non-violent idea is not so easy when death is all around you. Strategies can be different but our unity is more important.

We don’t teach our kids to hate the Israelis. They learn it from their own experiences. Every day there is news of kids getting arrested and shot by the Israeli army. Some of the earliest words my son Gibreel learned were ‘wall, war and cartridge’

Tell me about life in occupied West Bank?

There is no connection between the cities and villages in West Bank. The situation is getting worse. Thousands of Israeli settlers are living here. The extreme Right-wing government of Israel is implementing new policies. The Israeli occupation controls everything related to our life. They control our water, education, freedom of movement, economy, and so on. We don’t have an airport and seaport in Palestine. You have to cross a lot of checkpoints while going to work or to school.

What is the potential in media activism to carry forward the Palestinian struggle?

If you follow social media, more people are posting stories from Palestine. The mainstream media is controlled by those who support the Israeli occupation. They work every day to portray the Palestinian struggle in a negative way. They only tell one side of the story. Most of the media don’t cover the human rights violations happening routinely in Palestine. Sections of the global media portray Palestinians as terrorists. So it is very important to tell our own stories.

For you filmmaking is a social responsibility. Why is it important to tell your own stories?

It’s very important to tell our own story before others hijack it. By making this film I chose my role in this historic struggle. The film was my gesture of responsibility to society. I wanted to show our problems in Palestine, to bring attention to the Palestinian suffering. The film has been successful and has been well-received by the international audience. We need to bring more Palestinian stories in front of the world. More friends need to come out and tell their own stories. I am worried about the safety of my family and my people. I choose filming. As a human being, it’s our responsibility to stand with the people and fight the occupation. Be it Palestine, Syria or any part of the world.

There are allegations by Israel that Palestinians teach their kids to hate Israelis. What do you think about it?

We don’t teach our kids to hate the Israelis. They learn it from their own experiences. They have faced the soldiers and have experienced the worst treatment every day in their life. Every day there is news of kids getting arrested and shot by the Israeli army. Some of the earliest words my son Gibreel learned were ‘wall, war and cartridge’.