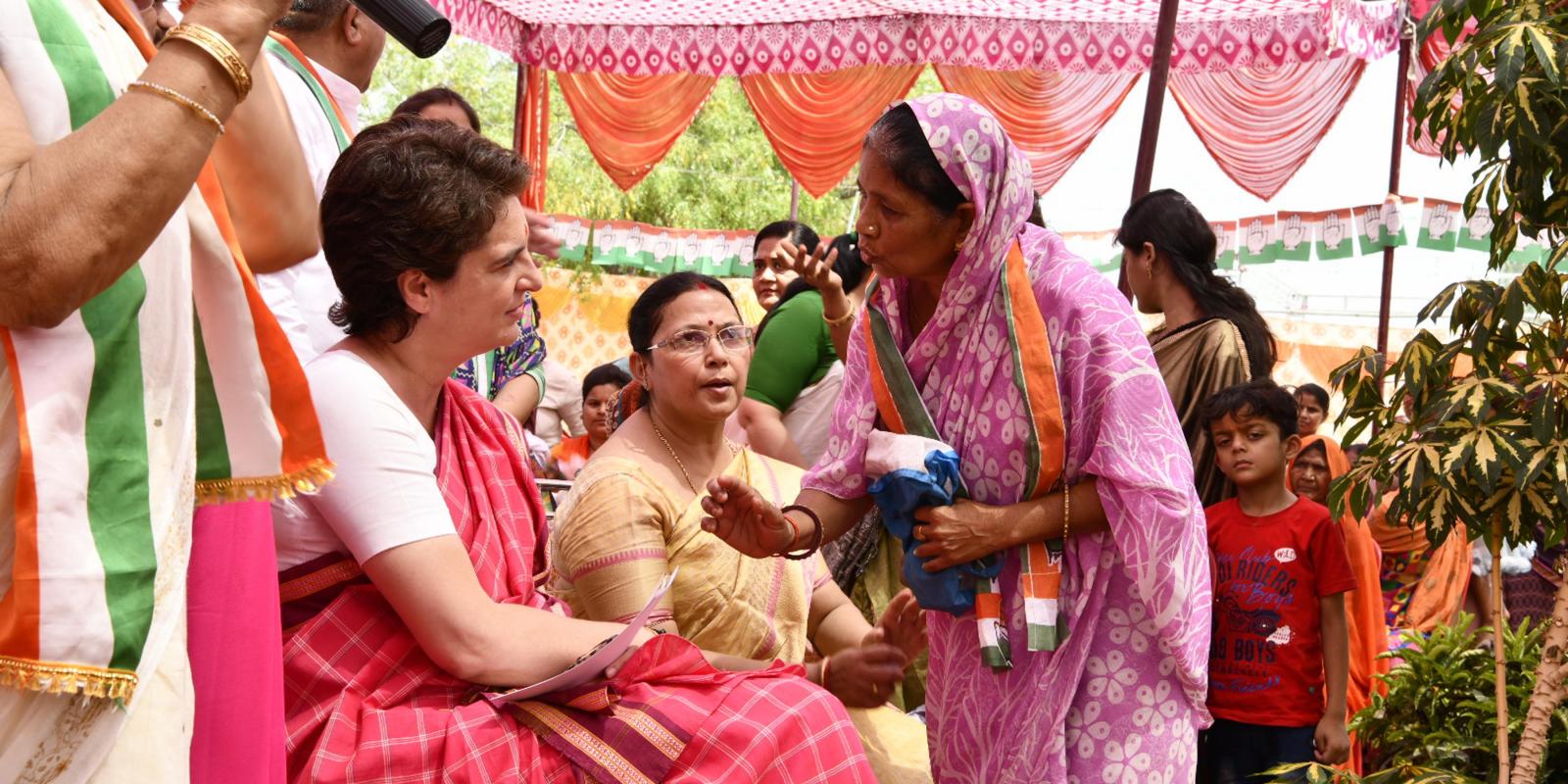 After being appointed as the general secretary in-charge of Congress in Eastern Uttar Pradesh, Priyanka Gandhi, in the company of her brother and Congress President, Rahul Gandhi, and Deputy Chief Minister of Madhya Pradesh, Jyotiraditya Scindia, landed at Lucknow’s Chaudhary Charan Singh airport to begin her arduous journey to not just revive the grand old party in a space of 45 days before the polling begins, but also to bring it to a point where it can challenge the formidable presence of BJP leaders like Narendra Modi and Yogi Adityanath and win some seats. At the face of it -- it seems like an impossible task.

Eastern UP nestles constituencies like Varanasi, Modi’s constituency, and Gorakhpur, Yogi’s constituency, including old bastions of the Samajwadi Party (SP), which have seen BJP, SP and BSP engaged in a tight contest. Over the years, Congress has found itself being squeezed out of this race and it would take a monumental effort to make a decisive and long-term breakthrough.

What everyone is asking in the teashops and street corners in the towns, cities and villages of Eastern UP is whether Priyanka can really make a difference in the fortunes of the party, which is riven by caste and religious issues. What compounds electoral complexity in a city like Gorakhpur, for instance, is the rampant criminality -- largely patronised by politicians and powerful temple trusts. In other parts of Eastern UP, caste poliics and aggressive Hindutva reigns supreme. All these factors make it difficult for any normal candidate to win an election, until they are able to align the full force of money and muscle power –combined with a formidable mix of religion and caste.

For long, members of the Congress have pined for Priyanka’s charismatic leadership and have been repeating ad nauseum to the top brass that she should lead the party in UP and elsewhere. Priyanka, they believe, is a natural leader and has the spunk of her grandmother, Indira Gandhi, and that she could revive the fortunes of the party

In the last few decades, Eastern UP, which used to have a strong presence of the Left parties once upon a time, came under the sway of BSP, until the BJP swept all the parties aside in the 2014 parliamentary and the 2017 assembly elections. The challenge for Priyanka is immense. She has to not just fight off the well-oiled machinery and BJP’s aggressive leaders, but also Akhilesh Yadav-Mayawati’s formidable electoral alliance (along with Ajit Singh’s RLD in Western UP) which is expected to win a majority of the 80 parliamentary seats in UP in the coming Lok Sabha elections.

For long, Congressmen have pined for Priyanka’s charismatic leadership and have been repeating ad nauseum to the top brass that she should lead the party in UP and elsewhere. Priyanka, they believe, is a natural leader and has the spunk of her grandmother, Indira Gandhi, and that she could revive the fortunes of the party. They recall with pride the manner in which she rubbished the election of a relative, Arun Nehru, who decided to contest against party candidate, Satish Sharma, with the backing of a BJP ticket, from Rae Bareli. In one sharply worded speech, she accused Nehru of betraying the family and asked the people to teach him a lesson. Nehru was walloped in the polls.

Priyanka was ready to lead the party, but her mother, Congress president Sonia Gandhi, decided that the mantle should fall on her elder sibling -- Rahul. Instead, Priyanka was asked to look after her family and nurse the two parliamentary constituencies of Sonia Gandhi and Rahul: Raibareli and Amethi. Much of the credit for their victories has been going to her, but the decline of the party in other parts of this crucial state has been worrying for Congressmen. They initially saw Rahul as a misfit in politics: he was presumed to be reclusive and antithetical to any politician, allowing opposition parties to call him all kinds of names while branding him as eclectic and immature, unfit for the hard hurly burly of Indian politics, especially in the rough Hindi heartland.

The massive loss of the Congress party in the 2014 general elections saw BJP trolls target the Gandhi scion, hurling choicest epithets. Some of these abuses were fed by Congressmen who were feeling left-out by Rahul’s attempt to rejig the organisation. In recent times, after a protracted struggle in terms of the creation of a self-image, countering the iron man image of Modi, reorganising and resurrecting the party, and injecting dynamism and optimism in the rank and file, Rahul, who was anointed as the Congress president more than a year ago, managed to win back the three crucial and big states, Rajasthan, Madhya Pradesh and Chhattisgarh where the BJP was in power for a prolonged period defeating all predictions of anti-incumbency.

To the credit of Rahul, he stopped the BJP’s relentless march in the last assembly elections in Gujarat with its tally falling to less than 100 with a desperate Modi doing kinds of polarisations and public spectacles to win back his home ground. Besides, the Congress won Punjab, and was the largest party in Manipur and Goa where the BJP used money and muscle power, and with the help of unscrupulous MLAs and pliant governors, formed opportunistic governments. The recent victories in the tough Hindi heartland, therefore, has improved Congress’s stock as a ‘national party’ and raised Rahul’s profile as a politician who has proved that Modi and his huge money-muscle machinery is not invincible.

Besides, it is a fact that the Rafael scam allegations have been frontally turned into a national and international issue solely by Rahul Gandhi’s singular and relentless campaign all over the country. That Modi has been cornered on the scam with Anil Ambani as a beneficiary has thoroughly exposed him as a prime protagonist and protector of crony capitalism in India. Along with the escape of Vijay Mallya and Nirav Modi, and the loss to the nation worth thousands of crores which have been allegedly siphoned off, Rahul’s protracted campaign on corruption in the highest office in India, has pushed Modi to the wall.

Her measured, learned and sensitive speeches are grounded in grassroots reality, loaded with her lived experiences with ordinary people and narratives of the plight and tragedies of the poorest of the poor, the jobless youth, marginalised communities in rural areas, including women, farmers in debt traps, small-scale entrepreneurs, handloom workers, craftsmen and daily wagers. Her self-confidence and style of mass-contact has endeared her to her party and to the people in the last few days

Priyanka’s entry into politics is expected to cement this positive trend in favour of the Congress party, which is also a do-or-die battle for the Gandhi family, mired in all kinds of civil and criminal cases. Her husband, Robert Vadra, is being interrogated for money laundering. This puts enormous pressure on her to deliver the goods for the party.

If Congress was not looking good in the past few months, her handlers would not have pushed her in the hustle and bustle of politics. In 2016, the Congress leadership had thought of making her lead the charge in the UP assembly elections, but the government got a whiff of it. Two happenings prevented her entry: the surgical strike against Pakistan and demonetisation. Also, Rahul, sources claim, had questioned her entry by asking a pertinent question: if she had to be brought in then why was I wasting my time in re-building the Congress?  It’s obvious that it is a confident and secure Rahul who is facilitating her entry in the party in the current circumstances.

Can she make a difference? In the 2014 Parliament elections, she looked jaded and was criticised for talking mostly about her grandmother’s clothes that she was wearing and why people needed to vote for her for this reason. She has truly reworked her script. Her measured, learned and sensitive speeches are grounded in grassroots reality, loaded with her lived experiences with ordinary people and narratives of the plight and tragedies of the poorest of the poor, the jobless youth, marginalised communities in rural areas, including women, farmers in debt traps, small-scale entrepreneurs, handloom workers, craftsmen and daily wagers. Her ‘Ganga Yatra’ on boats was a big success touching base with the most voiceless and invisible communities living in dire straits. Her self-confidence and style of mass-contact has endeared her to her party and to the people in the last few days.

Indeed, those who say that she is out there for a long haul for the Congress party might be proved right and wrong. Right, because, yes, she will make a difference in the long run. Wrong, because she might prove s a trump card in May 2019 also – something the nation will come to on May 23.