Power Can Grow From The Barrel Of NYAY… 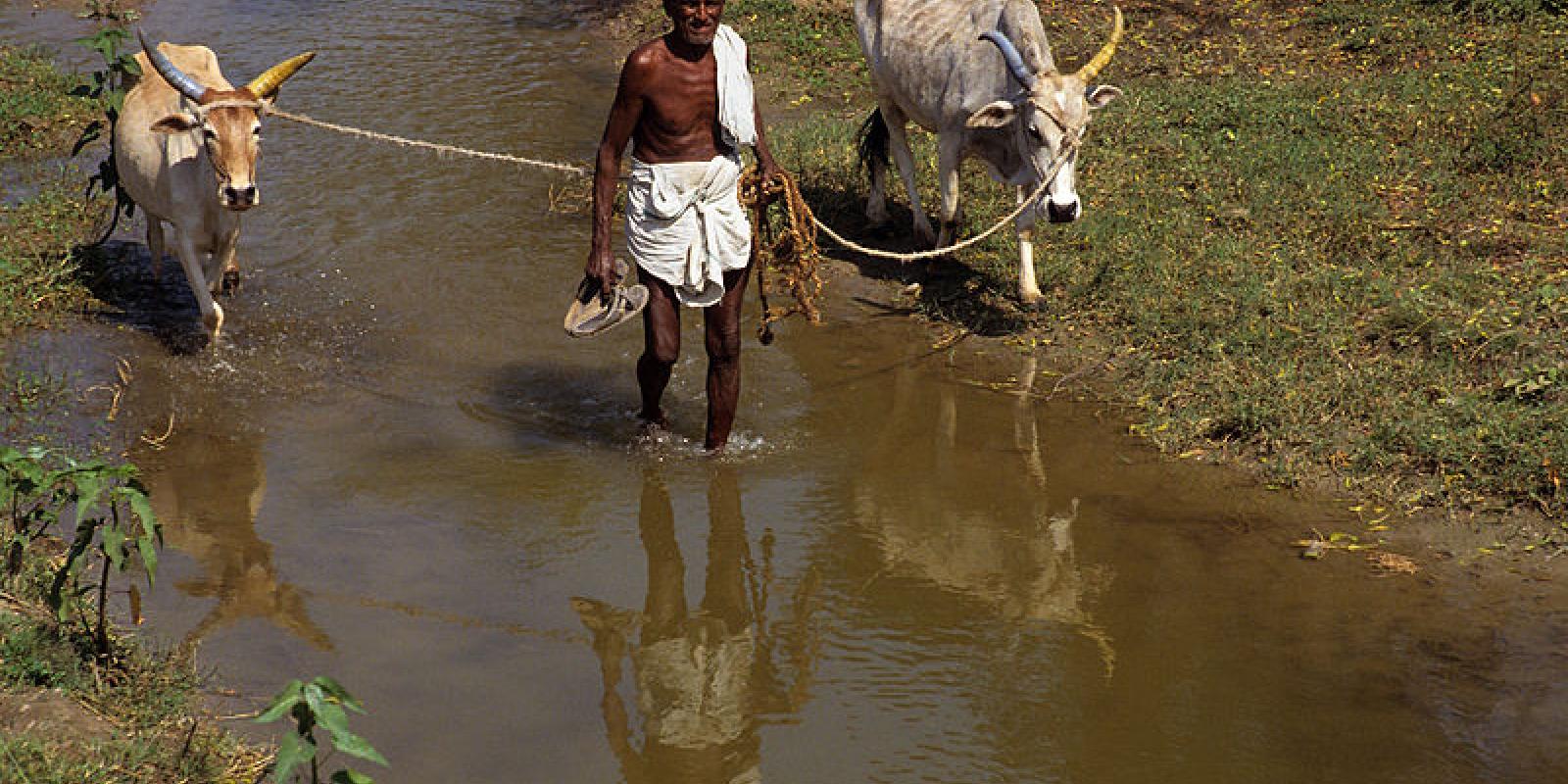 Recall the long-forgotten presidential speech on August 15, 1947, by the Constituent Assembly chairman, Dr Rajendra Prasad. This speech can hardly be improved upon as the national charter for creating a vibrant, humane and progressive India. It is a coherent and comprehensive expression of all that humanity may aspire for.

One faces intense frustration when contrasting India’s global comparative ranking in most socio-economic indicators, as also various assessments of the ‘state of the nation’. Particularly pointed have been the findings of the Socio-Economic Caste Census, 2011. They tend to spread gloom and dim hopes. This shows how we in India talk big but deliver little and excruciatingly slowly. However, come election time and empty slogans and shibboleths flourish all over. Hence, the voter has every reason to be dismissive of the various manifestos released by the political parties.

This pitiable state of the divorce between reality and tall claims is not for want of our efforts and periodic reiteration of tasks. Let alone the series of five-year plans (from 1951 to 2014), the subsequent central government efforts have been rejuvenated in the aftermath of the 1991 switch-over to the neo-liberal dispensation. These include many ad hoc measures to deepen and widen the ease of doing business and freedom of global and major Indian conglomerates. However, this process does not weave them in a consistent macro-economic framework called a five-year plan. Instead, we have a new set of slogans, and several renamed policies and programmes.

It is in this context that one may interpret various election manifestos. Take, for instance, the 1957 election manifesto of the Congress (which hardly faced any effective opposition until 1967). It had assured “everyone an equal chance to progress and wipe out poverty, illiteracy, disease and inequality” by going in for a central plan of industrialisation and modernisation. The abiding irony is that even now the political class continues to repeat the same promises!

Little wonder then that the ordinary citizen reposes little faith in the political class. After all, it is a class which has itself become ‘astoundingly rich’ – as shown by James Crabtree in his work praised as a potential classic, The Billionaire Raj in India.

The Congress manifesto has the daunting task of conveying not just its promises and programmes, but also of convincing the masses about the underlying, inter-connected and mutually reinforcing rationale of its various pro-people measures. Unlike the non-occurrence of the trickle-down theory, the NYAY programme would spread horizontally and vertically. Across regions there will be its positive spread-effects based on the micro decisions of the families whose bank accounts would be credited with the kind of sums they have rarely received.

Underlying many of its big ticket programmes is the inter-related outcome of weakening the grip of inequality on the lower sections which are sought to be made the beneficiaries of the NYAY programme. Its chances of success are derived from the bottom-up approach. The inherent and inevitable expansion of the home market for a variety of goods and services would give a critical boost to small enterprises and start-ups which would surely travel up to the corporate sector businesses. Thus, its higher growth outcome would be inclusive instead of causing adverse inclusion.

This much money with regularity and hassle-free delivery has never happened before. It can make a deep dent in chronic mass poverty. It can therefore unleash a chain of beneficial multiplier effects and consequent flow of positive linkages across the economy, even to the extent of reaching the big, organised industries and service providers. This would address the stubborn issue of deepening inequalities. Supplementary effects through enhanced public outlays on essential social services and provision of homestead land would make a qualitative breakthrough.

This is the reason we are prefacing our brief overview of the 2019 manifesto of the Congress party. Its content has to be seen in terms of the promises and their feasibility, desirability, mutually reinforcing connectivity and the short- and long-term effects of the primary, secondary, tertiary and continuing rounds of direct and ripple effects.

One must thereby consider the NYAY-based mandatory direct bank account transfer of Rs 72,000 into the bank accounts of the poorest 20 per cent of women heads of Indian households. The shift in the mindset of the policy establishment marks a goodbye to sloganeering and deception to buy support for the pro-corporate, minuscule oligopolies and create a facade to usurp national wealth.

The huge transfer of meaningful and not just token sums will generate real and multiple capability building and macro-social and political correctives among the most excluded sections. Imagine the impact of even medium-term capability, confidence and independence-generating role of these support measures after five years!

The economic and social effects would surely impact the political behaviour of the people, after over 72 years. It is in no sense a public exchequer-based ‘votes for notes’ kind of distribution of freebies which was so crudely and ashamedly indulged in by so many worthies over so many years. This kind of well-planned measure is a means to compensate the deprived and discriminated against sections in their relative and absolute deprivation.

How much money was pumped into the coffers of the big corporates by a plethora of so-called public financial institutions with so little recoveries (for pseudo modernisation and mimetic, limping and exclusionary industrial growth) is a story belonging to another genre. One must also add to the direct income transfer under NYAY the much-awaited hike in the public expenditure on education, healthcare, etc., which might go up to 10 per cent of the GDP.

This kind of analytical optimism is due to the content of these promises when the totality of the proposals is taken in unison and read along with their logical socio-economic and political linkages, feasibility and urgency. A regular transfer of freely, unconditionally usable minimum income supplement on the basis of practical human-familial needs marks a qualitative departure from the grotesquely sub-human poverty lines determined so far by agencies more bothered about fiscal deficit than the human-social criteria.

Monetary income constitutes an unavoidable precondition for participation in a decentralised market economy and is a basis for autonomous political choice as an entitled free citizen. It is integral to laying the real foundations for constitutional rights and duties. A one-blow attainment by the lowest segment of society can make India a qualitatively different country.

Such a programme has the potential of freeing itself from the ‘termites’ of corruption, cuts and commissions and may herald a change in the culture of public delivery of social services. It will make India a country inhabited by her empowered citizens and thus lays the foundation of a practical rashtravaad — a  country of equal, participating citizens enabled to turn their potential capabilities into a pulsating actuality.

This much money with regularity and hassle-free delivery has never happened before. It can make a deep dent in chronic mass poverty. This would address the stubborn issue of deepening inequalities

This is a real tribute to the fledgling democracy of India, which, after many disappointing episodes, seems poised to make a new beginning, provided inner party democratisation and transparent funding of elections too are also introduced in the process.

The hyper-active and secretly-funded election machinery of the ruling and main opposition parties and public participation in the political process, policy debates and x-raying of the performance record of the political outfits no longer remain too difficult a task. After all, almost every serious contender has had a hand in the governance structures at some point or the other. Similar socio-economic, corporate and western financial powers and policies have ruled the roost in India so far with token anti-poverty doles. The NYAY-based entitlement at about Rs 200 per day (a meaningful jump) seems to be in line with the findings of the Socio-Economic Caste Census, 2011.

For the welfare and wealth of the people, one may also add the protection and enhancement of their inalienable rights. This has still to become the ruling idiom of our political processes with a singular commitment to the downtrodden, without any discrimination and equitable access for all.

Besides, the country is witness to the utter failure of the neo-liberal policy path in terms of deeply entrenched corruption in almost every sphere. Little wonder then that any real policy debate is no more visible. Many seem keen to conspire to block any cool and credible assessment. That is precisely why Congress manifesto needs a sharper look with a big perspective.