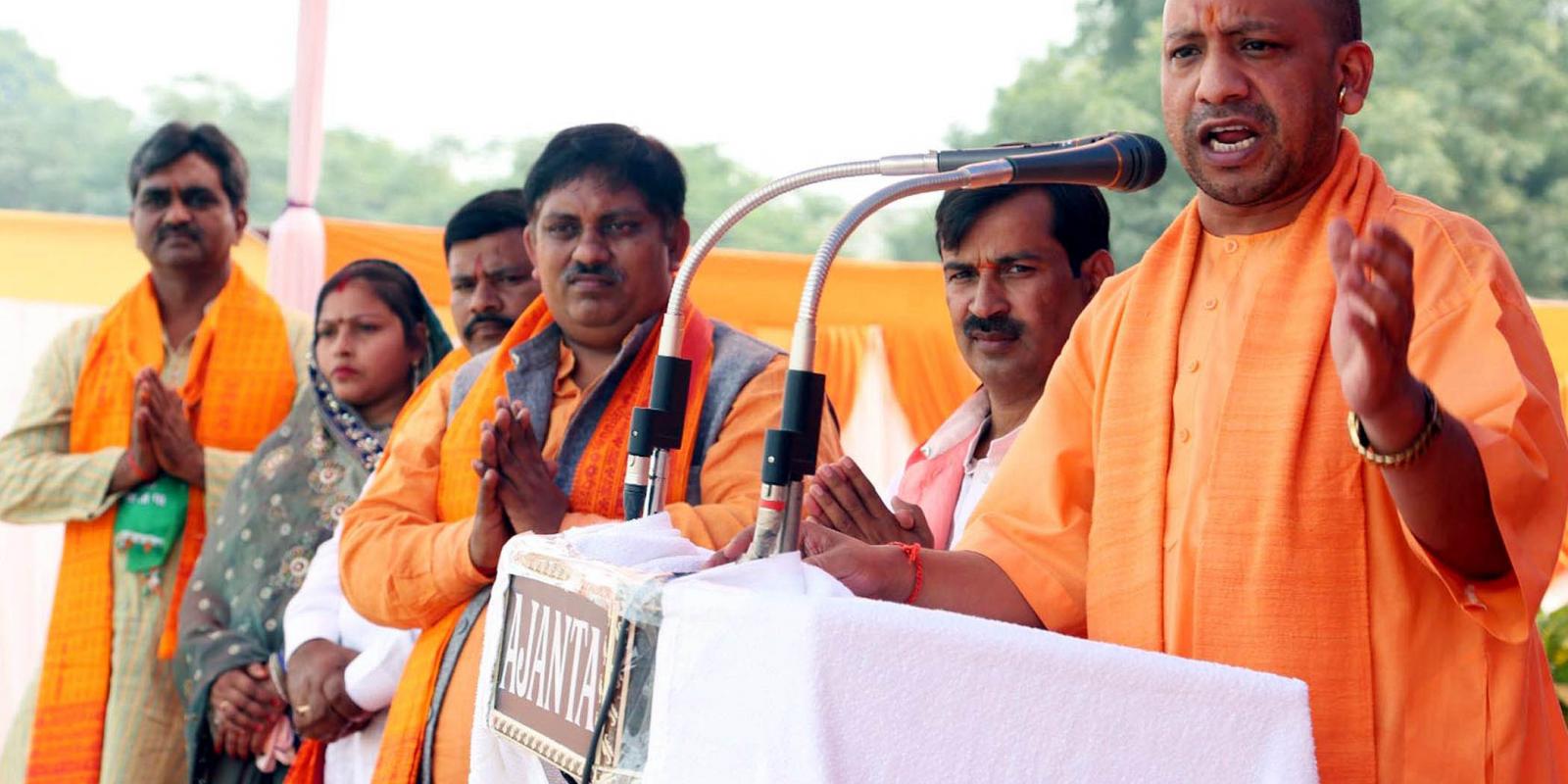 Chief Minister Yogi Adityanath’s government is heading towards its first major trial: on November 22 and 24, the people of Uttar Pradesh will vote to elect representatives to 652 local bodies.

Nine months after the party came to power, there is a realisation in the BJP, and amongst other parties too, that these elections will set the mood for the 2019 Lok Sabha elections in the state. All the parties and their leaders are out in number; this is the first time all the major political parties are fighting polls on their party symbols.

Counting of votes polled for 16 Nagar Nigams, 118 Nagar Palikas and 438 Nagar Panchayats will be done on December 1. More than 3.32 crore voters will be eligible to cast their votes at 36,269 polling stations.

Adityanath, who is now the poster boy of the more assertive brand of Hindutva practised by the BJP, has become an important face for its campaign. Keeping the 2019 elections in mind, the party is using the image of the saffron-clad yogi as a star campaigner in several election-bound states such as Gujarat and Himachal Pradesh. Moreover, the party is using the UP chief minister as a draw in states like Kerala, where it is in opposition to the left. This is the first time any chief minister is addressing so many rallies and public meetings for local body polls.

Interestingly, Adityanath launched his campaign from Ayodhya and the move is being read as a hint to give voters the impression that his government is very serious about the construction of the Ram temple. His meetings with Sri Sri Ravi Shankar, and rumours about paying off the Shia Waqf Board to facilitate the building of the temple are doing the rounds. This obvious pandering to their core voter base is to divert the public’s attention from other problems.

Keeping the 2019 elections in mind, the party is using the image of the saffron-clad yogi as a star campaigner in several election-bound states such as Gujarat and Himachal Pradesh. Moreover, the party is using the UP chief minister as a draw in states like Kerala, where it is in opposition to the left. This is the first time any chief minister is addressing so many rallies and public meetings for local body polls.

As always, like other parties, the BJP is under pressure from dissidents who were denied tickets. A number of them have filed their nominations as independents. After being denied a ticket, one worker attempted immolation in front of the party headquarters. He and his supporters accused the party leadership of giving tickets to outsiders, while ignoring loyalists.

The BJP government at the centre is currently under considerable pressure and is grappling with the combined effects of demonetisation and the Goods and Services Tax (GST). The general belief that every election is a test of popularity for Prime Minister Narendra Modi has turned this election into a litmus test of his policies.

With regard to electoral success in Uttar Pradesh, the BJP is on a veritable roll. Since 2014, it seems it can do no wrong: it won 73 of the 80 possible seats during the Lok Sabha elections and it now occupies 325 of the 403 seats in the Assembly and has won 11 of the 12 mayoral seats in the state.

The BJP has released a 12-page manifesto with photographs of PM Modi and party president Amit Shah. The BJP state president, in the presence of the chief minister, released the document. The sankalppatra promises to promote cycling, provide free wi-fi in all public places, pink toilets for women in city markets, cow shelters in all cities and the upgradation of cremation grounds.

The Samajwadi Party (SP) and its leader, former chief minister Akhilesh Yadav, after consolidating his hold over the party, are taking these polls very seriously. The party has decided to contest these elections on its own to better gauge its strength on the ground. Desperately in search of a win, Yadav has been telling his party workers that these results will set the tone and tenor for the Lok Sabha polls.

The SP’s strategy for the local body elections is operating at several levels. The first is that it wants to highlight the issues of loss and hardship caused by demonetisation and the imposition of GST in the state. The former chief minister has told his workers to raise awareness about the work his government did, namely, the Agra-Lucknow expressway, the Lucknow Metro and other such modernising efforts. That his party not only improved basic infrastructure in cities but also provided link roads in villages and worked in the health, education and transport sectors is slated to be the highlights of its poll campaign. Lastly, Yadav has been telling his party workers that the SP’s victory would be a victory for socialist ideology and the defeat of fascist and communal forces. He has regularly reiterated that his party’s victory would be a moral victory, one for clean politics, and would pave the way to unseat the BJP at the centre.

Bahujan Samaj Party (BSP) supremo Mayawati, in order to show how seriously she is taking these elections, has camped in Lucknow. In an effort to save some face and stem the mass exodus from her party, she is looking to recover some ground after the humiliating loss in March. In the Assembly elections, the BSP had registered its worst performance in over two decades. It had managed to win 19 seats and 20 percent of the vote share. The BSP supremo is looking at these elections as an opportunity to revive the party which has been losing seats and support since 2012.

In a last-ditch effort, despite protests from her existing party workers, Mayawati has accommodated rebels from other parties and made them her official candidates. Resultantly, the party coordinators have been accused of selling tickets.

In her campaign, Mayawati is following the strategy of training her guns on the Prime Minister. This is to give the impression that her fight is directly with the BJP. Much like the SP, Mayawati too is critical of the two economic policies undertaken by the BJP: demonetisation and GST.

More than 100 BSP leaders left the party during the last eight months and all accused Mayawati of selling party tickets. Those who left included backward Muslims and Dalits. The majority of the defectors jumped ship to the SP, which speaks for the rising popularity of Yadav.

In March, the hope that the Congress would come to power in the state fell through. Instead, it was faced with the worst performance ever, managing to win only seven seats. Now, under the leadership of Rahul Gandhi and Raj Babbar, the party is trying to distance itself from the fray. The party leadership adopted a new strategy to vet the candidates, the UPCC president interviewed every single one. Babbar was seen sitting in party offices, meeting people and strategising. He not only toured different parts of the state to motivate the party leaders and workers, but also released the list of star campaigners.

The double whammy of demonetisation and GST is going to be a recurring rhetoric, while growing unemployment and the lack of development in the state in the eight months of BJP rule, clubbed with growing saffronisation of the state and the failing law and order mechanism are important pillars of the campaigning strategy for the party.

The Aam Aadmi Party (AAP) has decided to make an entry into UP and has fielded candidates for all 652 seats. Its fliers, posters and representatives are seen all over the state. As a part of its strategy, AAP has decided to form mohalla committees in the state and spread its network all over UP.