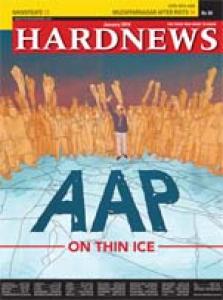 ‘In Rural India, what is going to make a difference is the coming together of many social movements and political parties’
Souzeina S Mushtaq Delhi

‘It doesn’t matter whether a cat is black or white, as long as it catches mice.’
Sadiq Naqvi Delhi

ALL’S NOT SWELL IN BANGLADESH

After a limp turnout in the elections, the logjam continues in Bangladesh, with a flailing economy and political unrest dampening the lives of the people
Sadiq Naqvi Delhi

NO TIME TO WIND UP THE CLOCK

For the Congress to avoid a serious drubbing in the Lok Sabha elections, it needs to rebuild the party at the state and booth level, instead of clocking up PR budgets and giving inane interviews
Hardnews Bureau Delhi

Rahul Gandhi might be getting better with his speeches, but the need of the hour for the Congress is to walk the talk
Hardnews Bureau Delhi

THE UNGUARDED FORTRESS OF THE GANDHI FAMILY

AAP: FROM BOOM TO BUST?

After a phenomenal performance in the Delhi Assembly elections, the tenure of the AAP government has been marked by a series of gaffes, political wrong-turns and, most importantly, a lack of even a tenuous grip on the functioning of the state. How long before they squander away their gains?
Sanjay Kapoor New Delhi

The aam aadmi is back on centre stage in the new political paradigm that the AAP has ushered in. But in a deeply divided society as India’s, there’s the danger that the aamaadmi could very well be promoting oppressive stereotypes and thwarting the rights of the ‘other’
Ghazala Jamil Delhi

The AAP’s claims of issue-based and action-oriented governance are unique, though not unprecedented. But incidents such as the harassment of the Africans by a mob led by an AAP leader point to the Achilles’ heel in a post-ideological party
Rahul Govind Delhi

'If we believe that our judicial system is unbiased, then we have to believe that Narendra Modi is innocent'
Souzeina S Mushtaq Delhi

Former pakistan army chief Pervez Musharraf ousted an elected civilian government from power and ruled illegally for over ten years, yet there are those in India and in Pakistan wh

The nation has finally discovered that AAP stands for Alphonso Aadmi Party – there’s absolutely nothing aam about some of its ministers: Law Minister Somnath Bharti, in particular, attacking and publically humiliating African women because their prudish neighbours made shocking remarks about them (these people are not like us, they wear short skirts, their food smells, they are drug addicts and sex workers, and so on) is just not done. Particularly after the Delhi Police refused to make arrests without a warrant.

Some time back, I stumbled upon the work of an Italian photographer who had courageously travelled to Syria’s troubled and war-ravaged city of Aleppo. The theme of his gallery of disturbing pictures is ‘deserted homes’, a silent glimpse into what the war has done to the abodes of ordinary people. The homes featured are mostly of the rich and the well-heeled, who seem to have left in a hurry once the bombs began to go off.

A GEM FROM AVADH

it is true that a dedh part of the film is about fleshly stuff, like boobs, bums and smooches.