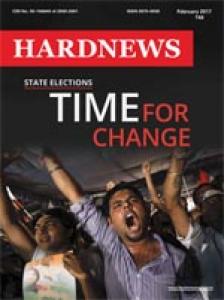 Elections: Beware the Ides of March

If early polling is anything to go by, then the assembly elections across five states could mean an all or nothing scenario for the BJP
Sanjay Kapoor Delhi

UP: Why do the Jats not want the BJP?

Jat leaders in western UP, across outfits, are working over-time to persuade their community to abandon the BJP
Abeer Kapoor Muzaffarnagar

UP: The tide has collapsed

In Ghaziabad’s five constituencies, the overwhelming support for the BJP of the 2014 Lok Sabha elections seems to be waning, giving way to a free-for-all
Shibu Kumar Tripathi Delhi

The sun sets for Sasikala?

Bisara: At Ground zero of the lynching

In the village where Mohammad Akhlaq was lynched communal tensions simmer below the surface. Not surprisingly, most villagers intend to vote along religious lines
Shalini Sharma Dadri

Reporting in a post-truth world

Ever since Narendra Modi came to power in 2014, those aligned with his ideology have been openly derisive of journalists they say oppose the BJP. All kinds of invectives have been hurled at journalists, including the coinage of “presstitutes”. Journalists’ credibility was damaged methodically by alleging lack of objectivity in their writing.

‘This will be an Interesting Election’: Jagroop Singh Sekhon

Healthcare: No country for the sick and ailing